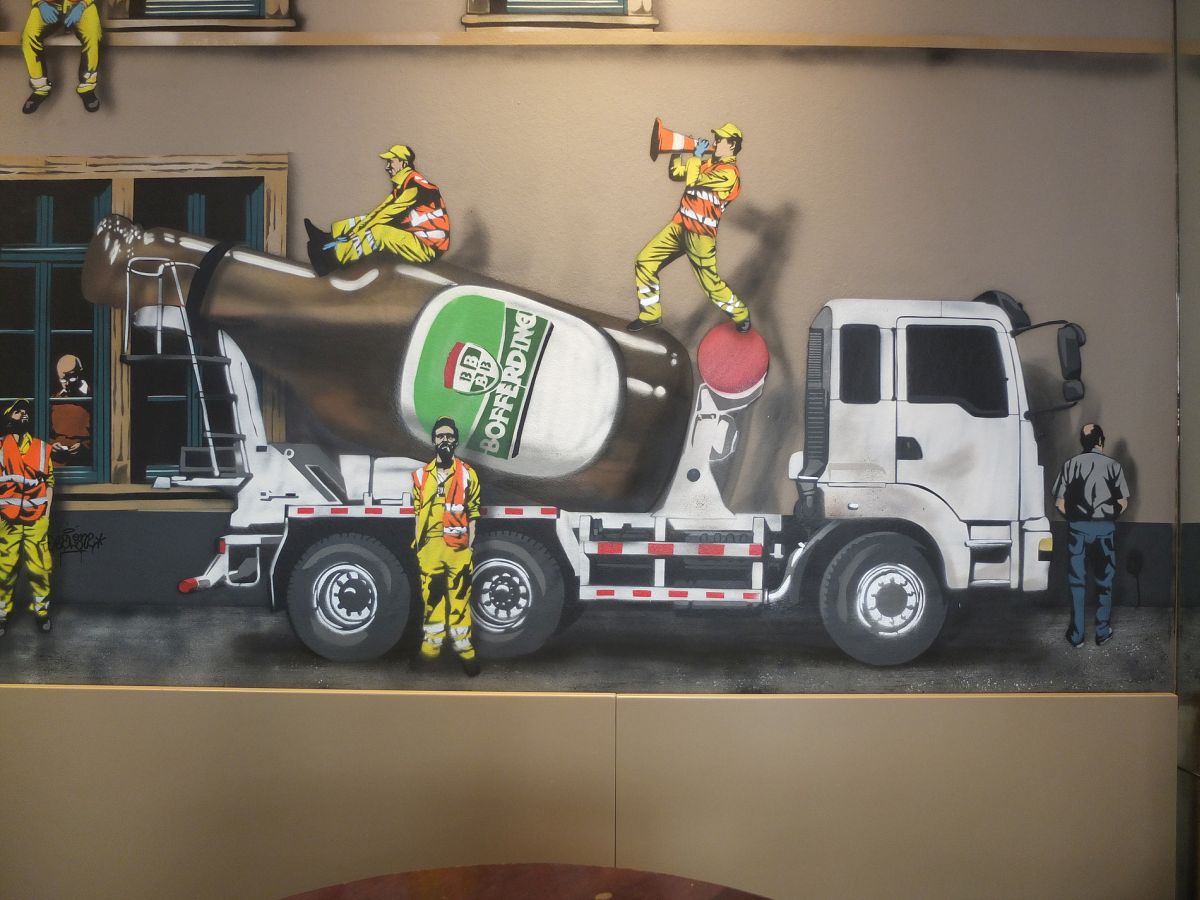 On of Juane’s artworks at the Union Bar, Luxembourg City. Pic used with kind permission.

With only about a month to go until the ‘Nuart’ event comes to Aberdeen, the final selection of artists have been added to the added to the roster.

His work examines the invisibility of this profession despite the fact that their job keeps them in the public eye.

He displays them in unusual situations, always in their work gear, such as walking tightropes over washing lines, marching as Roman legions etc.

Since he used to work in said profession, one may wonder how he day-dreamed of being in the position of some of his subjects. Or, is that, like his pieces, fantasy?

Martin Whatson comes from Norway, was born in 1984 and studied graphic art in Oslo and has exhibited, both in solo and joint exhibitions in Tokyo, London, Paris, Australia, and also in the USA. His graffiti and stencil work, using urban decay as part of his inspiration. Thirteen years into his career he will be making his Scotland debut, in Aberdeen, thanks to Nuart.

Gdynia born Mariusz Waras, aka M-City is another stencil artist. But this time with a difference.

He uses hundreds of small cut outs to make larger constructions, again using the urban environment he grew up in as his main inspiration. Being an industrial city, his work features images of mechanical origin as well as natural origin. Often his pieces are made on a grand scale, one of the largest being 85 metres in size. This very prolific artist, having created well over 700 works, is currently a lecturer in art in Gdansk.

From her first show in Loughborough in 2000 through to her latest in Madrid this year, Alice Pasquini has exhibited and worked in various cities throughout Europe as well as The Americas and China. Not only is she a graffiti artist, painter, set designer and illustrator, she also works in the 3D medium and sculptures using found objects.

She rarely sits still in her pursuit of work, constantly keeping herself busy in more than 100 cities world wide. This also is her first time working in Scotland.

Born in 1974, this sculpture graduate was born and studied in Pontevedra in Spain. His sculptures generally are usually not on a grand scale. An examples of his work can be found on tops of bus shelter and on cornices and windows , averaging only 15cm in size. This makes the viewer work to see them. He has many strings to his bow. Playing guitar in a rock band, publishing a heavy metal fanzine and heading a digital art collective. He has also worked in the photography medium.

As well as these guests coming to Aberdeen, local artists and schools will be involved in the project during and before the Easter Weekend special event.

In my last article on Nuart, I intimated that James Finucane was the man behind this art group. This is not so.

Although he is the public face of the Aberdeen venture, he actually heads up the day to day running of the company, a position he took up two years ago. Nuart is actually the brainchild of Martyn Reed who relocated to Stavanger from Leeds over 20 years ago. Apologies for any misunderstanding relating to this.