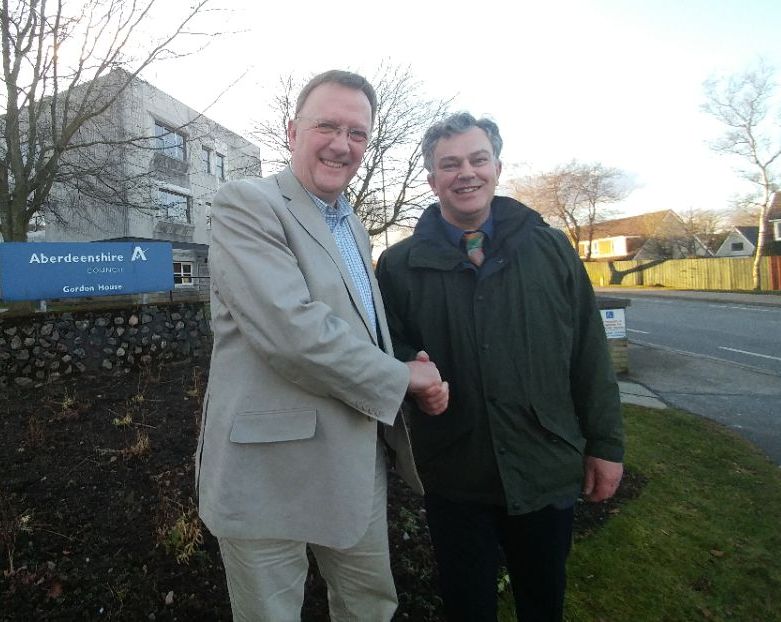 The confidence and supply agreement between Aberdeenshire’s Democratic Independent and Green Group (DIGG) councillors – Martin Ford and Paul Johnston – and their council’s Partnership administration has delivered significant benefits for Aberdeenshire residents. That is the view of both the DIGG and the Partnership.

The agreement was struck in 2015. The DIGG remained an independent opposition group but guaranteed limited support to the minority Partnership administration, allowing it to take office and bringing stability to the Council.

In return, the Partnership committed to supporting a range of specific policies and other changes put forward by the DIGG.

The agreement has worked well and been adhered to by both sides. It is the first such arrangement in Aberdeenshire.

One provision in the agreement is that an annual, objective, assessment of progress with it be requested from the Council’s chief executive. The assessment for 2017 has now been received.

The assessment shows the specific provisions in the confidence and supply agreement have either been delivered or are ‘work in progress’.

In addition to the policy changes in the confidence and supply agreement, the Partnership has adopted suggestions from the DIGG in the Council budget put forward by the Partnership.

“The DIGG’s aims in reaching a limited agreement with the Partnership were to bring stability to the Council at a time when no grouping could form an administration by itself, and to secure policy changes and service improvements for residents.

“The DIGG has remained an independent opposition group – but one that has been able to deliver significant policy change. I’ve been particularly pleased that the Council has taken steps towards genuine budget consultation and is working towards further improving links with the third sector, charities and voluntary oganisations.”

“The cross-party co-operation between the DIGG and the Partnership has brought some significant progress. There have been been specific improvements, such as the investment in active travel.

“The adoption of the carbon budget is a governance measure of genuine significance – a Scottish first – that should deliver long-term benefits, and may provide a model for other councils.”

“The willingness of the DIG Group to offer political support to the Partnership where they could and constructive criticism where they couldn’t, has made this an extremely effective administration. Their willingness to engage and negotiate has shown just what can be achieved where politicians decide to concentrate on meaningful outcomes rather than just headlines.

“I hope that Aberdeeenshire is able to continue benefitting from this constructive approach to politics after May’s elections.”

“We have fundamental aims in common with the DIGG – to provide quality public services to all residents in Aberdeenshire and in consultation with residents, and to develop effective partnership work with others in order to achieve this.

“Our agreement with the DIGG has in particular helped us to develop links with local credit unions. It has enabled our aspirations to develop more cycling and walking routes to become real projects.

In 2015 it was crucial for services in Aberdeenshire, and for the people dependent on these services, that we were able to form a stable Administration after a long, unsettled period. The Confidence and Supply Agreement secured this.”