There are few people taking to social media to profess love for Muse’s Marischal Square development which is growing up and around – and now under Provost Skene House.  Photographs from the site show that far from respecting the house, it is not only surrounded by this oversized new office structure, but also digging works are also taking place which certainly seem less than safe for the Provost Skene House. Article by Jon Symons, Photographs by Suzanne Kelly of the Provost’s House as it now sits, and from Writing from Scotland – by Christine Laennec. 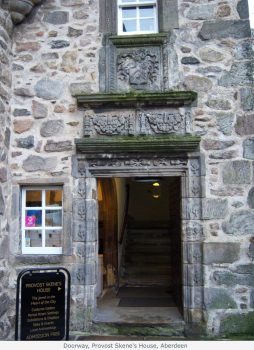 Photographs which have appeared on social media make it look as if the fabric of Lord Provost Skene House is not being respected by the builders. Aberdeen Voice has been promised access to the site and a statement from the builders.

This will be published in due course.

So what is it about Provost Skene House (PSH) that inspires an abiding affinity with most Aberdonians?

Is it the fact Mary the First was on the Scottish throne when the foundation stones were laid?

Perhaps it’s because PSH is the oldest surviving house in Aberdeen and one of the few remaining examples of early burgh architecture in the city.

It has an exceptional interior with outstanding examples of 17th century plasterwork and a painted gallery with an unusual cycle of religious tempera paintings.

The first records of the house date back to 1545 and the vaulted basement is likely to be from this period.

In 1622 this former three storey house was bought by Matthew Lumsden who added a two storey and attic gabled section to the south west side. His Coat-of-Arms, dated 1626 is clearly visible in one of the dormer gables.

The house was then bought in 1669 by the wealthy merchant and later Provost of Aberdeen, George Skene of Rubislaw and he reconstructed the original house and built the square tower on the north west side.

The house is steeped in history and was used by the marauding Duke of Cumberland’s troops in 1746 and for a long time after was known as ‘Cumberland’s House’.

In 1732, the house was divided into two separate tenements but was then brought together again in the mid 19th century and later used as a lodging house (Victoria Lodging House) but thereafter it slowly fell into disrepair.

Many of the slum buildings surrounding it were demolished in the 1930s but a public campaign (purportedly supported by the Queen Mother) saved Provost Skene House from Council vandalism. 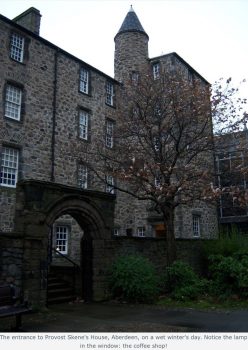 The painted gallery is important and unusual.

Originally depicting The Life of Christ in 10 panels the ceiling is by an unknown artist although it does show Flemish and Germanic influences.

Some of the armorial devices included in the paintings may be those of previous owner Matthew Lumsden and this suggests the ceiling may have been painted between 1622-44.

The smaller painted room depicts landscapes with figures all done in a Classical style.

The archway, now removed at Muse’s instigation, was transported from Union Terrace Gardens and rebuilt at the house in 1931.

In the sixties the then Council decided to erect the monstrosity known as St Nicholas House and PSH was virtually hidden from public view from 1968 until 2013 when the Council’s carbuncle was finally demolished.

You could be forgiven for thinking Aberdonians had forgotten about their historical city centre jewel but that was not the case. During the limited (some might say derisory) consultation with the public on what should be done with the site it became obvious that Aberdeen’s residents had rediscovered their love for PSH.

Even the present Council realised this and determined, in recognition of the importance of the Broad Street site to the future of the city centre, officers should explore the options open to the council to ensure any development was of the highest quality and sympathetic to Provost Skene House and Marischal College and ruled that should include consideration of the council developing the site through a joint venture and the possibility of a design competition tender exercise.

Of course, saying one thing and doing something completely different would seem to be the hallmark of the current Council administration and it appears they have put money and potential profit ahead of all other considerations.

The final design (Muse Developments) was supposedly chosen by an unbiased and independently minded ten person working group based on Urban Design, Culture and Heritage but only five of the group were Councillors. The other five were Council Officers and an employee of Ryden, the site selling agent and later the company Muse chose to market the property.

More recently photographs have shown the apparent disregard the contractor has shown for PSH as they appear to dig under the south west gable end foundations with no obvious support for the four hundred and seventy one year old building.

When completed the Council seems determined to dumb down the house and use some of the rooms to showcase the likes of Joey Harper, Annie Lennox and other lesser known Aberdeen celebrities. 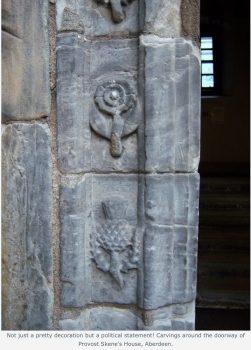 They have also decided not to reopen the once popular PSH tea room and this may well be because they hope to rent the ground floor retail units of Marischal Square to fast food outlets.

Provost Skene House is a national, never mind a city, treasure and most Aberdonians hoped and thought it would finally be showcased in the green grassed and tree lined surroundings it deserved.

Unfortunately it seems this Council, just like the one in the nineteen thirties, has little if any regard for the needs and wants of Aberdeen’s long suffering citizens but then again, why on earth should we be surprised?