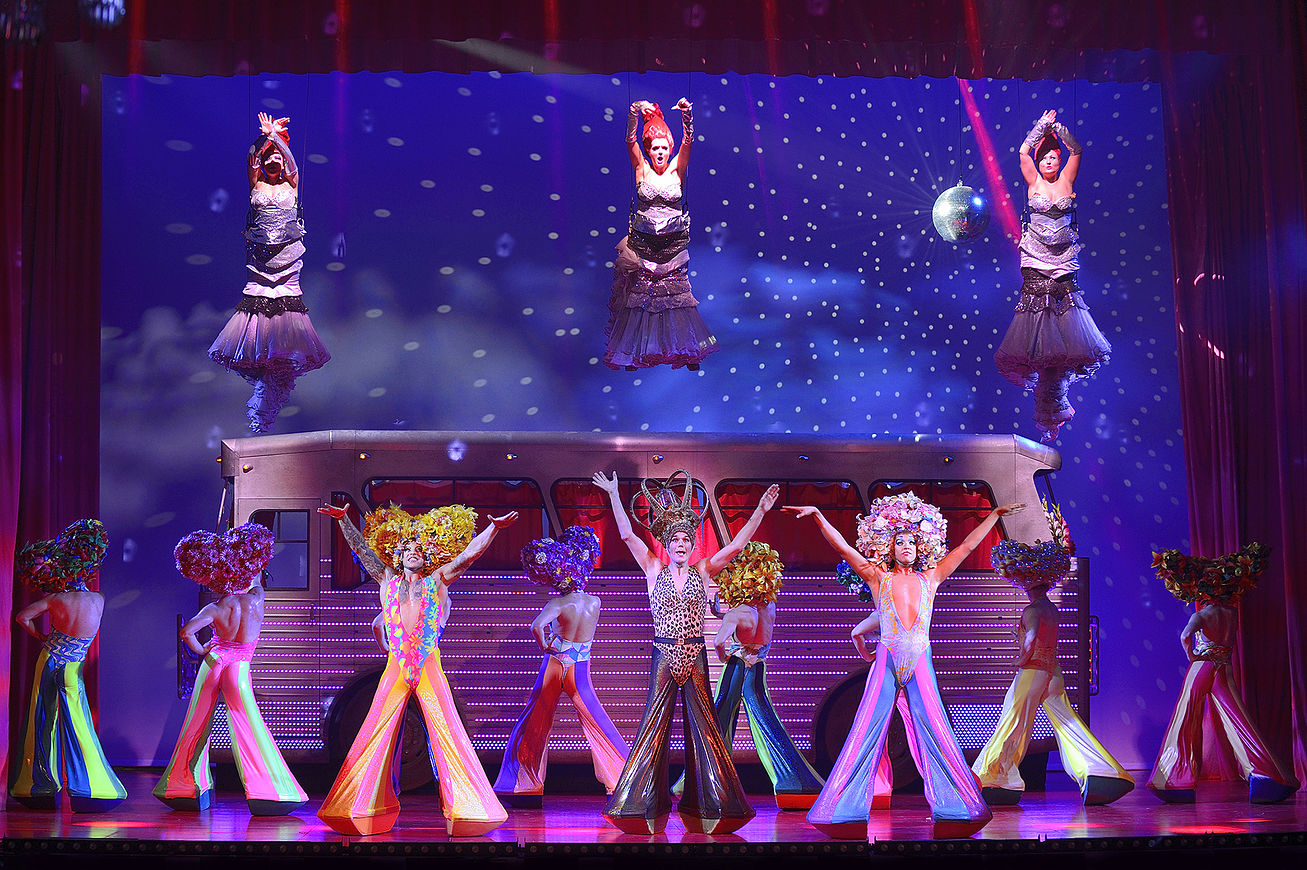 In a musical tale which has achieved cult status worldwide, two drag queens and a transgender person board a battered old bus by the name of Priscilla for the road trip of a lifetime. Duncan James as Tick, Simon Green as Bernadette and Adam Bailey as Felicia don’t know it yet, but they are in for a truly transformational journey.

Accompanied by a shed load of sequins, a case of champagne and enough feather boas to bankroll Poundland, the outrageously camp trio set off into the Australian outback, leaving behind the safety of Sydney, and head in the direction of Alice Springs in search of love.

Along the way the three friends in skirts attract homophobia, red-necked ridicule, uncalled-for violence and of course rampant self-doubt. Even Priscilla suffers a breakdown and is saved by a knight in shining armour. Philip Childs as Bob the friendly mechanic arrives in the nick of time to take matters in hand and save the day.

The stage set is relatively simple. That is, of course, if you consider the manoeuvring of a full size single-decker bus around His Majesty’s stage an easy task. Priscilla pretty much fills the available space and if you look behind her, the vast expanse of the outback forms a shimmering theatrical backdrop. Indoor scenes are stark and appropriately minimalist. Costume, lighting, dance and song are where this production is at.

The term flamboyant springs to mind when describing the costumes, although in reality this might be an understatement. In fact the costumes are 98 percent outrageously both super-camp and extravagantly OTT. Around five hundred costumes are used in this production and few of them could be described as simply ordinary. And then there are those wigs!

The bus painting scene sees the company singing ‘Colour My World’ while dressed as paintbrushes primed to obliterate the words ‘Fuck off Faggots’ from Priscilla’s flank.

In the ‘Macarthur Park’ scene, a bevy of dancing divas tastefully made up as teacakes provide a delightfully sugary green accompaniment to Duncan James’ rendering of the Jimmy Webb / Richard Harris classic.

A pounding hit-parade of hot disco dance numbers such as ‘Girls Just Wanna Have Fun’, ‘Boogie Wonderland’ and the vibrant ‘Hot Stuff’ abound, alongside a slightly obscure and curiously Bacofoil-like take on Verdi’s ‘Sempre Libera’.

As a dazzling musical extravaganza, Priscilla Queen of the Desert works splendidly well throughout, with Duncan James, Simon Green and Adam Bailey slipping effortlessly into the lead roles.

There is more than a whiff of Panto in this production, which features a splendid warm up routine delivered by Callum MacDonald as Miss Understanding; and a few surprises pop up, including a half-time Aussie Barn Dance featuring volunteers from the audience, plus a hilarious slapstick routine in which Bob’s wife Cynthia, played by Julie Yammanee, ejects ping-pong balls from the usual orifices.

Priscilla offers first class entertainment and is a definite must see. However the faint hearted may need to avert their eyes during the ping-pong scene.