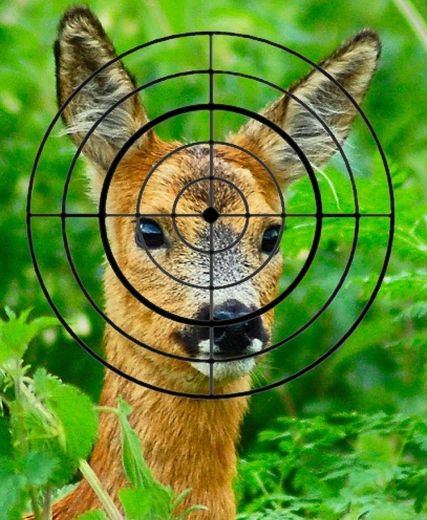 Recent figures obtained under Freedom of Information show how a controversial, unpopular cull of deer on Tullos Hill has spread to city wide persecution of roe deer. Despite claiming the cull will reduce traffic accidents involving deer the City Council refused to provide data to back its claim that deer cause a road accident every week.

The information which has been released shows that since 2011 Aberdeen City Council has spent £28,930 on shooting deer.

The City initially started the cull on Tullos Hill, the former waste tip where the City is attempting to establish a large forest.

Government reports suggest that due to the poor soil matrix it is unlikely trees will thrive on Tullos Hill. Those that do reach any height may be blown over due to the lack of deep, firm soil to support tree roots.

Aberdeen City Council pressed ahead with this scheme ignoring the huge public outcry over the deer cull and despite losing £43,800 when a previous tree planting project on the Hill failed. Deer and weeds were blamed for that failure. Today weeds tower over many of the new saplings and the City has been given a list by the Forestry Commission of numerous ways the plantation is failing.

The deer cull was as unpopular as it was deemed unnecessary. The City refused to listen to free, expert advice on how to have trees as well as deer on the Hill. Instead hired marksmen were used. Astonishingly no signs were erected to warn that high powered rifles were being used. The City promised that signs warning of ‘forestry operations in progress‘ would be replaced by signs clearly warning recreational users of Tullos Hill that shooting was taking place.

Visitors to Tullos have seen no such signs erected during these past five years. A new FOI request will try to ascertain what, if any, warning signs were produced and where they were placed.

The Roe deer, which seldom live longer than 6 or 7 years in the wild, were a popular attraction for visitors to Tullos Hill.

The City recently told its Housing & Environment Committee that a deer a week was involved in a road accident in Aberdeen. Information obtained by campaigners did not support this figure. Repeated requests for their raw data have been ignored by the City and the Chief Executive.

Campaign spokesperson Suzanne Kelly addressed the Housing Committee’s last meeting and was given an assurance that there would be no further culling until both humane alternatives and a proper count of remaining deer took place. The last SNH count came up with about 20 animals.

Across the City huge scale building projects have removed habitat from deer and other animals. Campaigners expect that there would be a spike in fatalities, not least because the City is only now agreeing to put up signs. Peter Leonard, a City official who backs the cull and tree planting scheme told Kelly in an email that once land is sold for development the fate of the deer is no longer the City’s concern.

“The cavalier attitude to wasting money on a doomed scheme and to killing animals needlessly has to change. The City’s policy has been to shoot and ignore non-lethal options since Liberal Democrat Aileen Malone first pushed this scheme through when she headed the Housing Committee. At the time she actually asked residents to raise over £200,000 for fencing – or the deer would be shot.

“The small number of people who pushed this scheme seem to me to be motivated by many factors such as political point scoring and saving face – but none of the people insisting deer must be culled or Tullos must be a forest seem motivated by the wishes of taxpayers or the needs of the animals already here. The SNH guidelines they invoke are just that – this city got along just fine without needless culling.

“I am glad that we have assurances that there will be proper scrutiny of this expensive, wasteful, cruel policy before any more damage is done. The city’s officers relied on figures about road accidents they are unwilling to share – could this be because of inaccuracies in the reporting?

“If there were that many accidents, and the city erected no signs, no fences, no non-lethal deterrents to these accidents, then I consider them culpable in injuries to animals and culpable for the accidents as well.”