With no sign of regret or compromise, let alone acknowledgement of a huge problem, Aberdeen City is literally ploughing ahead with its unpopular tree planting on the rocky soil of Tullos Hill, which sits on the North Sea. This tree planting as we now know involves a deer cull – which as documents show was deliberately withheld from the consultation. Local resident Alan Robertson gives his point of view. 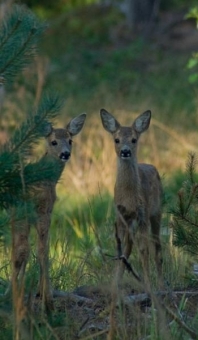 Anyone who has watched the Tullos Hill deer cull debate unfold over the last eighteen months cannot help but be astonished by how this has been conducted by Officials and Councillors at Aberdeen City Council.

In the latest twist to this sorry tale, the Council have started the deliberate destruction of areas of the deer’s natural habitat by removing large quantities of gorse from the Tullos Hill area.

These are areas where the deer used to shelter and graze. Along with the gorse in these areas, the plants and grasses that the deer eat have also been cleared.

The Tullos Hill meadowland has been ruined by the Council actions and the biodiversity of plant life and creatures who depended on it destroyed.

The Council released the following statement to the Media a few days ago:

“The roe deer population on Tullos Hill is currently much higher than the land can support. There is very little variety of vegetation growing and deer suffer as a result.”

Yes, the deer will ‘suffer as a result’ of the deliberate destruction of their habitat by the Council who have removed the gorse where the deer shelter. The clearance of these areas by the Council has ensured that there ‘is very little variety of vegetation growing’. As far as overpopulation goes, I walk across Tullos Hill regularly, and I have not seen any deer there for many weeks and suspect that most of the deer have migrated to Kincorth Hill or other areas nearby because their habitat on Tullos Hill has been destroyed by the Council.

There was no mention of the Council’s intention to cull the deer when the public consultation was released and now they have resorted to destroying the deer’s habitat to eradicate the deer from the area. In addition, the Council say that the culling of the deer will still go ahead. The result of Council action is that the deer are being attacked on two fronts; first by the destruction of their habitat and then by culling.

the Council should be aware that Tullos Hill isn’t suitable for their tree planting scheme.

It is obvious to anyone who has followed the Council’s plans for Tullos Hill unfold via their Committee Reports, Media releases also and from emails I have received from Officials at the Council, that they are prepared to do and say anything to continue with their ridiculous tree planting scheme on Tullos Hill.

The Council proposal that Tullos Hill will become a commercially viable forest is unrealistic. The soil at Tullos Hill is unsuitable for tree planting let alone being capable of sustaining a large forested area.

In addition, consider this: have you ever seen a forested area on a North East Scotland coastline? There are very good reasons for this and the Council should be aware that Tullos Hill isn’t suitable for their tree planting scheme.

Aberdeen City Council is determined to go ahead with the tree planting scheme despite the obvious inherent disadvantages of the Tullos Hill environment. They have recently erected three perimeter fences to ensure that deer and rabbits are kept out of the main areas where trees will be planted. The combination of gorse removal and these wide ranging fenced off areas leaves the few remaining local deer on Tullos Hill with far less of their natural habitat available.

To proceed to cull the few remaining deer on the hill would be barbaric considering what the animals have already been put through by Aberdeen City Council in the last few months.

I urge local people to speak out against the proposed deer cull and contact their local Councillors regarding this issue.