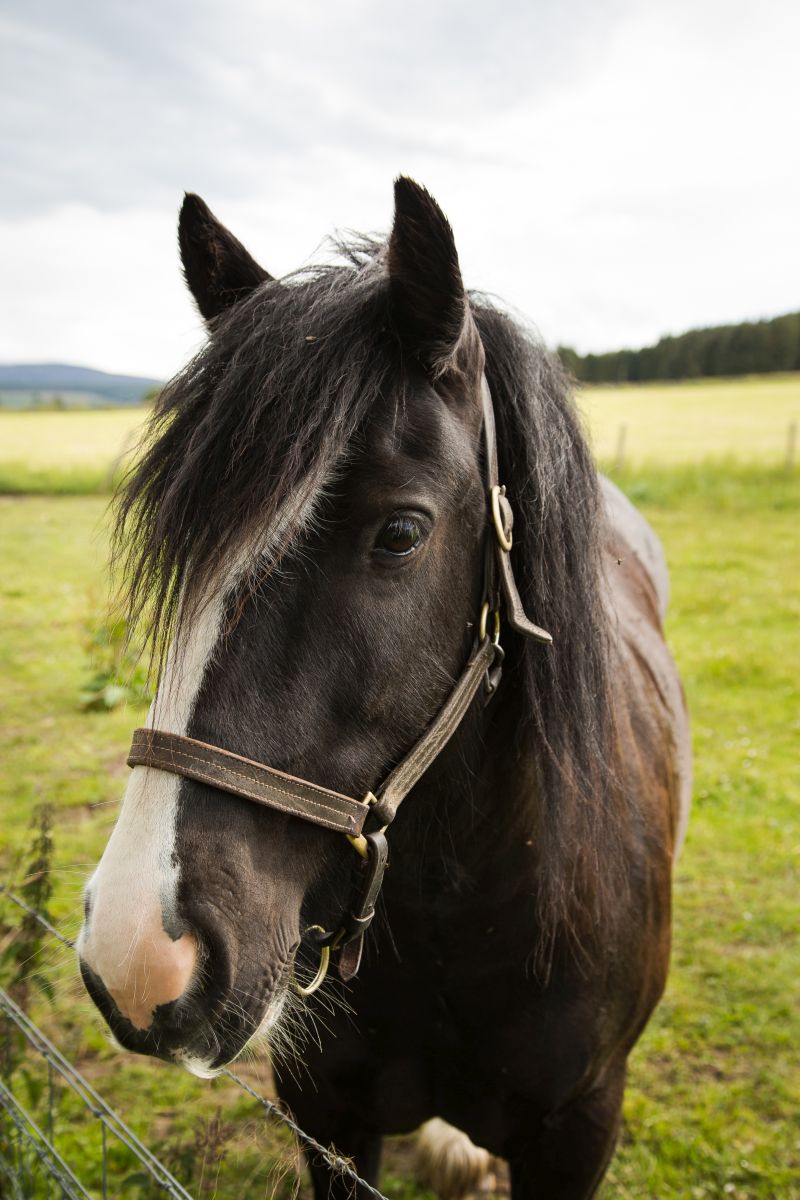 A horse is in its final stages of training ahead of its debut performance later this month at one of Scotland’s leading highland games.

Across the country, musicians, dancers and athletes have been fine tuning their performances and training in order to be at the peak of their discipline for the highland games season.

However, in rural Aberdeenshire a horse has been undergoing a rigorous training regime to participate at the annual Lonach Highland Gathering and Games on Saturday, 22 August.

Socks, a six-year-old gelding, hasn’t been practicing his sword dance or fine-tuning his sprinting ability for the light athletics, but getting used to the skirl of the pipes and the beat of drums.

The young Irish Heavy Cob is making his first appearance at the popular traditional event where he will parade throughout the day with the Lonach Highlanders, and numerous pipe bands.

Having never encountered the sound and motions of the pipes and drums before, Socks has been attending the Lonach Pipe Band practice sessions over the last three months in order to become comfortable with the distinctive sounds ahead of his debut at the gathering.

A horse and cart has traditionally followed the Lonach Highlanders on their marches in order to convey their weapons when they became too heavy for the men to carry on long marches, particularly over uneven hill roads.  Socks will follow in the hoof prints of a long line of horses to provide this supporting role to the Lonach Highlanders.

Socks is owned by Kildrummy resident and Lonach Highlander Derek Gray, who has looked after the Lonach horse on marches since 2013. Mr Gray bought Socks as a yearling and hopes he will become a long-standing part of the Lonach marches.

In addition to featuring in the Lonach marches, Mr Gray has set up Odd Socks Enterprises to offer horse-drawn carriage services, which will see Socks available to hire along with a restored four-wheeled wagon.

Organised by the Lonach Highland and Friendly Society, the Lonach Highland Gathering and Games is held annually on the fourth Saturday in August. Staged in the small, picturesque Aberdeenshire village of Bellabeg, this year marks the 174th time the gathering has been held.  One of north-east Scotland’s best known and most popular traditional summer events, it attracts up to 10,000 visitors, including many from overseas. 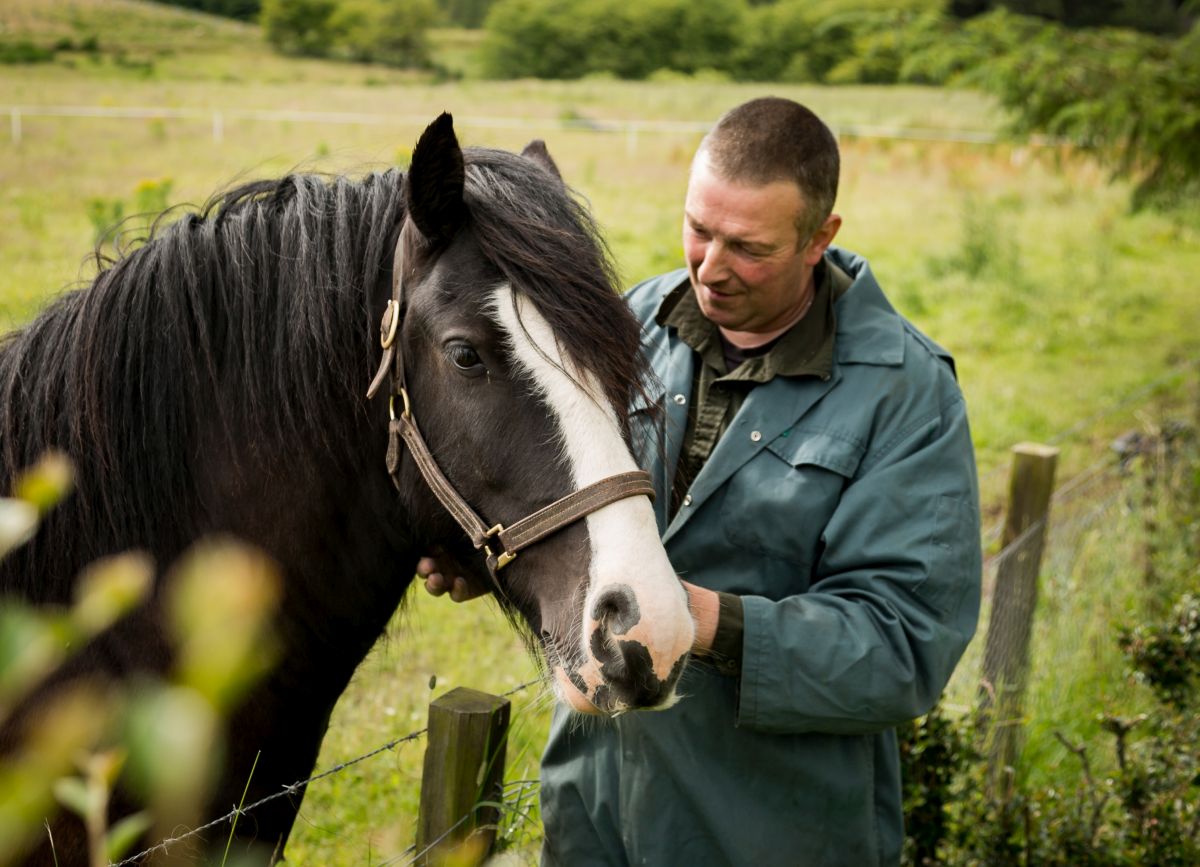 Socks with his owner Derek Gray

A major feature of the gathering are the Lonach Highlanders.

First established in 1823, they are believed to be the largest body of non-military men to carry ceremonial weapons in Britain.

Dressed in full highland dress and armed with traditional Loachaber axes and pikes, which are over eight-feet in length and weigh up to 3 kg (7 lbs), the Highlanders form an impressive sight on their three marches on games day.

Membership of the Lonach Highlanders is drawn from residents of the local area who descend from the Forbes, Wallace and Gordon clans, and currently numbers 220 men.

“A horse has long been a feature of the Lonach Highlanders marches and usually gets as a warm a reception on the games field as the Highlanders themselves. Our last long-term horse, Mac, filled the role for over five years but retired along with Willie Gray, who looked after the horse at Lonach previously. Last year Derek felt Socks was too young, so we had a temporary pony, Mhairi, who did a great job.

“The debut of a new horse is always special and we hope Socks will have a long association with the Lonach Gathering. A horse is an important part of the unique experience that is the Lonach Gathering. The sight of 220 Lonach Highlanders and the massed pipe bands leading the Lonach horse and cart onto the games field in such a stunning setting is a sight to behold.”

“Until a few weeks ago Socks had never encountered the sound of the bagpipes or the beat of a drum, so we’ve spent the last few months getting him used to them.  Horses have very sensitive hearing so it is important to expose Socks to these unique sounds so that he is comfortable with them. He has a great temperament and has taken the training in his stride.

“I’ve been looking after the horse on the Lonach march for the last two years, taking over the role from my father who had done it for over 40 years before that.  Having reared Socks since he was a yearling, I will be extremely proud to march alongside him on games day. There’ll be a few carrots close at hand to keep him sweet and ensure he behaves himself and doesn’t end up in the beer tent with all the other Highlanders.”

This year’s gathering, on Saturday, 22 August, will once again feature a full programme of traditional highland events. This will include individual and massed piping, highland dancing and light and heavy athletics, with some of the country’s leading pipers, dancers and athletes competing. The 300th anniversaries of the 1715 Jacobite uprising and opening of the Poldullie Bridge, a local landmark, will also be marked at the event.

Established in 1823, by Sir Charles Forbes, 1st Baronet of Newe and Edinglassie, the Lonach Highland and Friendly Society is a charitable organisation based in Strathdon, Aberdeenshire. The society organises the annual Lonach Gathering at Bellabeg Park, Strathdon, which is held on the fourth Saturday of August – this year’s event takes place on Saturday, 22 August. The main attraction at the gathering is the march of the Lonach Highlanders, a unique body of non-military men.

One Response to “Neigh Joke: Horse Trains For Highland Games”