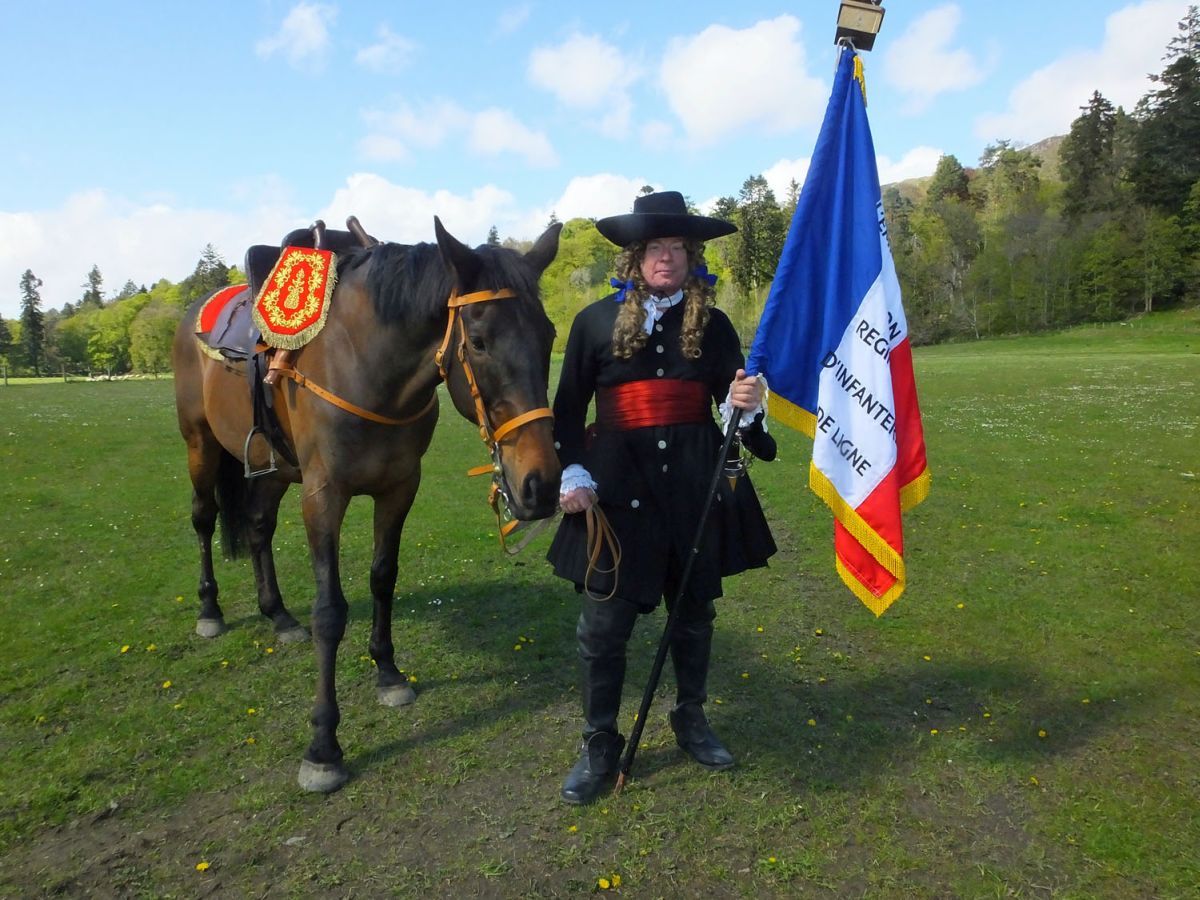 Alan Larsen as one of Bonny Dundee’s Cavalry with a captured French Standard from the Battle of Waterloo.

With thanks to James Rattray.

What does the 1689 Battle of Killiecrankie have in common with the 1815 Battle of Waterloo? The two battles set 120 years apart have one thing in common in the 2015 commemorations and that is New Zealander called Alan Larsen.

Alan Larsen grew up in New Zealand, at a very early age he discovered he had a passion for history.

At the age of 13 years old, when all his friends wanted to ride motor bikes, he decided he needed to learn to ride a horse. Being from Invercargill farming stock, his Aunty Isobel McIntyre provided him with his first horse.

At the age of 17 years he was in communications with Brigadier Peter Young, the founder of the Sealed Knot, the UK‘s oldest re-enactment society, formed in 1968. Alan says:

“Brigadier Peter Young said, come to England and join my Life Guard of Horse. So I did just that. I started my re-enacting journey in 1977.”

His passion for his hobby has led to an unusual career path, Cavalry consultant, advisor to English Heritage, historical event manager, the partial recreation of the Charge of the Light Brigade, the list goes on.

At this year’s June 15th Bicentenary of the Battle of Waterloo, ‘the most impressive reconstructions ever seen in Europe, with 5,000 re-enactors, 300 horses and 100 canons.’ Alan Larsen plays the Duke of Wellington.

Five weeks later at the Soldiers of Killiecrankie on Saturday 25th and Sunday 26th July, Alan is one of Bonnie Dundee’s Gentlemen of Horse or cavalry.

“Alan Larsen was instrumental in starting the Soldiers of Killiecrankie, his enthusiasm is infectious. He said he would bring Bonnie Dundee’s cavalry back. So with the support of the Killiecrankie Battlefield owners and local farmer, last July we organised our first large event.”

“We had lots of really good feedback and non-more so than from the re-enacting world, word went out that Killiecrankie is a great event to take part in. This year we are anticipating even larger numbers of re-enactors, with a contingent travelling from Ireland who are going to tell us why the Irish were at the 1689 Battle.”

The Soldiers of Killiecrankie weekend has cavalry and infantry displays, battlefield tours, a living history camp that gives a unique glimpse behind the scenes of the daily life of the government troops as they wait to go into battle, showing the way in which lives are lived, how the weapons are maintained, the mealtimes, the care of the wounded, the making of musket balls.

There are also ‘period sensitive’ events from traditional storytelling, waulking cloth, dressing up for the whole family in traditional highland clothing for men, women and children, stalls, food, traditional crafts and other activities from targe and sword making for the youngsters, archery, golf, basket weaving, Battlefield Horse stunts, Executions through the Ages, and a popular Saturday night Battlefield Ceilidh.

For further information – www.SoldiersOfKilliecrankie.co.uk
or contact: – James Rattray james@explorescotland.net or 01796 473335.