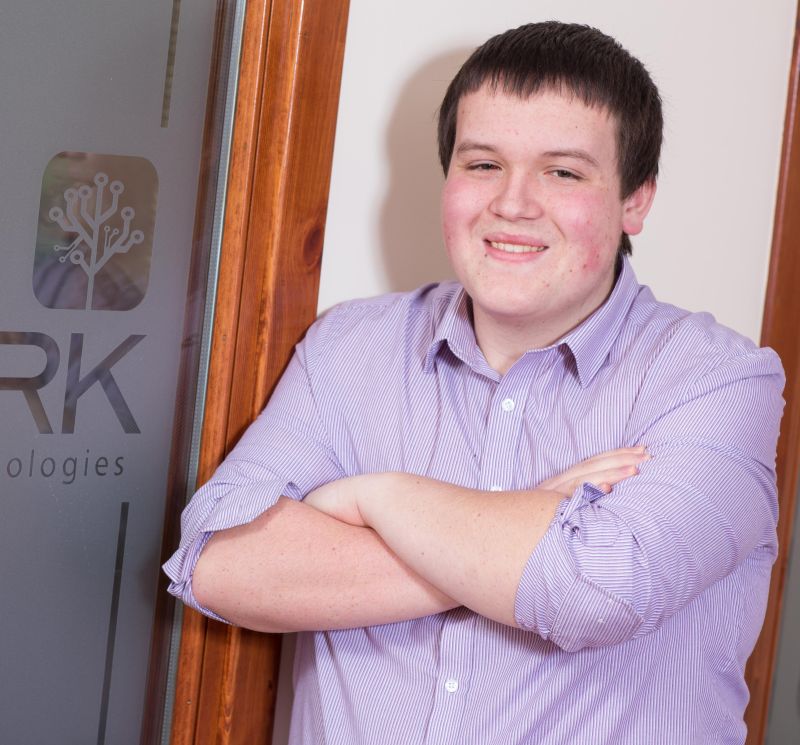 The technology firm was nominated by one of their own apprentices in the Scotland-wide quest to recognise good practice and help for young people taking the first steps in their technology careers.

18 year old Neil Warren from Oldmeldrum accompanied his boss Austen Clark to the Scottish Parliament where they were presented with the award by Roseanna Cunningham MSP, Cabinet Secretary for Fair Work, Skills and Training.

Since being taken on as the company’s first apprentice earlier this year Neil has become a valued part of the Clark IT team – and judges said they were impressed that Neil had put forward his employers for the honour, saying it demonstrated that he was being ably supported in advancing his career.

Speaking after the awards, Mr Clark, managing director of Clark IT said:

“We had no idea Neil had nominated us for this award so it came completely out of the blue to be told we were shortlisted, and to be invited to Edinburgh to attend the presentations.

“Neil has demonstrated to us the benefits that apprentices bring to business, and we’re delighted that he has become part of the Clark family team.

“Employing young people as modern apprentices will certainly be something that we as a company will seek to pursue in the future.”

2015 marks the 5th Anniversary of the awards, part of the ‘Get On’ programme which has helped many young people at the start of their careers, including over 7000 apprentices directly employed and trained by Microsoft partners and customers.

Clark IT has over 20 years of experience in providing industry leading support and delivering business-class technology. The company’s integrated solutions provide industry leading services, productivity and cost effective IT platforms for business growth. Its client base stretches from Aberdeen to Inverness.

For more information, see the firm’s website at www.clark-it.com