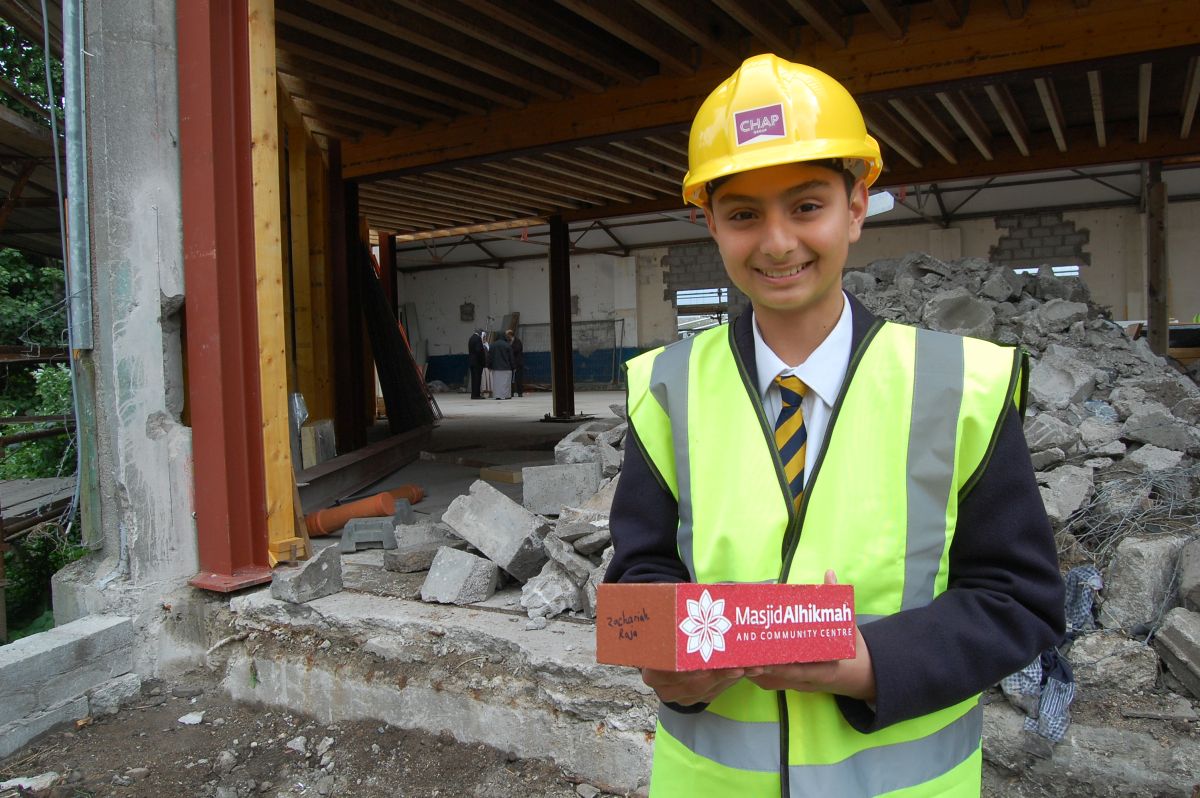 Zachariah Raja with the brick he laid as part of the ongoing Masjid Alhikmah project in Aberdeen.

Community support for a landmark development in the heart of Aberdeen has been set in stone during a fitting ceremony to mark the latest stage of construction.
The Masjid Alhikmah, on the city’s Nelson Street, will feature community and youth facilities as well as prayer halls for north-east Muslims.

On Friday, June 19 families gathered to play their part in the build process when they took the opportunity to lay bricks in the foundations of the three-storey building.

The event coincided with the start of Ramadan, the holy month of fasting.

Each of the bricks had been sponsored during a fundraiser for the development earlier this year, with the Alhikmah Foundation continuing to work towards hitting its £1.7million target. More than half of that sum has already been donated, with the effort aided by the donation of the site.

Recent events included a sponsored expedition to Snowdonia earlier this month, with 12 intrepid participants, and next on the agenda is the latest in a series of fundraising dinners on July 1 at the Hilton Treetops in Aberdeen. Full and half tables for the Iftar dinner are available.

With costs being met entirely by community fundraising, the dedication of the project’s supporters has been welcomed by foundation committee members. The organisation’s annual report for 2014 has recently been published, outlining progress to date.

“Masjid Alhikmah is a community focused facility and we are incredibly grateful to all who have contributed. The sponsorship of the foundation bricks is an excellent example – with many families quick to support that initiative. We are delighted to welcome everyone to the site to set their bricks, a very symbolic part of the project.

“Every penny spent on the project will come from fundraising by our supporters and the response has been excellent. There is still a great deal of hard work to be done to realise our vision, but the energy and the commitment of the many people who are fundraising is an inspiration to everyone involved in the project.”

Masjid Alhikmah will feature space for worship, funeral preparations, dedicated women’s facilities and a family community centre. There is an active Muslim community living in and around the city of Aberdeen and the facility is designed to help create unity and foster a sense of harmony between Muslims and fellow north-east residents. The name chosen for the new centre stems from Arabic. Masjid translates as “a place of congregational worship” and Alhikmah as “wisdom”.

CHAP Group’s construction division is the main contractor for the structural and external aspects of the scheme. Work began in January, with the structural steel frame of the building now in place and the exterior due to be completed by August. The second phase will include all interior work.