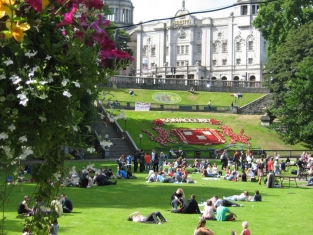 “The report highlights initial concerns with the City Garden Project. All risks featured in the business case are of high or medium risk.
Most concerning is the risk of running out of private sector donations, which is the most severe risk in the report, at 75%. Aberdeen City Council are expected to gamble over half of the funding through the risky TIF scheme.

“Even if capital costs increase by just 10%, the loan won’t be repayable in 25 years and the council will have to increase its borrowing to over £100m. A leading economist said last year that capital projects such as these could easily cost double.
( Ref:  Neil Baxter, Press and Journal 14/5/2010 )

“This project could really drive the city in to more debt which is not what my generation needs.”

“I’m worried about the long-term impact the project could have on the city. There has been no investigation in to the effect of building another theatre on our existing arts venues. I fail to see real evidence on how over 8000 jobs are going to be created by replacing a park with a park, adding an extra floor to the Art Gallery and improving pedestrian routes in the city centre.”

“The risk is just too high and I remain unconvinced by the business case. People inAberdeenvalue public services and are already feeling the effect of £618m of debt. They don’t need more worry caused by short-sighted economic plans centred around a park pushed only by the city’s out-of-touch wealthy elite.”