With thanks to Paul Smith on behalf of Citrus Mix. 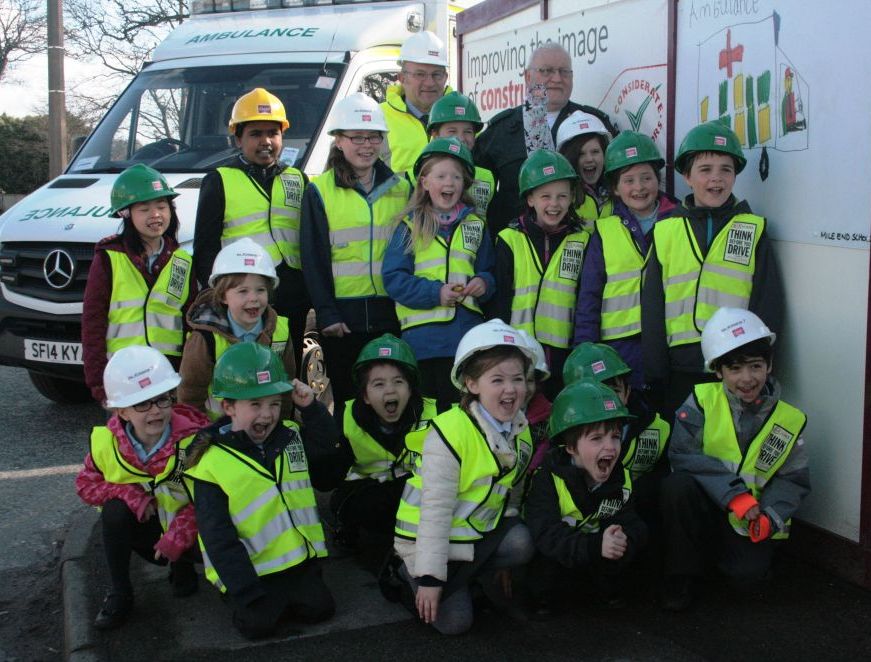 Mile End School pupils with representatives of CHAP and the Scottish Ambulance Service during the site visit.

A group of budding artists enlisted to add a splash of colour to a prominent Aberdeen construction site have been rewarded for their efforts by being given a taste of life with the city’s ambulance service.

CHAP Construction is in the process of building a new ambulance station on the plot of the existing facility on Ashgrove Road West and called upon pupils of the nearby Mile End School to lend their creative talents.

Children from P1 to P7 produced a series of 20 posters which have now taken pride of place on the hoardings surrounding the site, all with an ambulance theme.

20 children received VIP treatment as they were given an insight into the work of the emergency team by Scottish Ambulance Service personnel in Aberdeen and a sneak preview of the preparation work for the new station by CHAP representatives.

“The children were all so enthusiastic about the art project and put a lot of work into their posters. It has certainly livened up the site and the artwork has been getting a lot of attention.

“We wanted to thank them personally and were delighted the pupils were able to join us on site. They got a really good idea of the vital work the ambulance service does in Aberdeen as well as the plans for the new station and it was exciting for them to see it all at close quarters.”

“It was great for the children to visit the station and to see their art in place. We’re very proud of the work they have produced and it has been valuable for the pupils to find out more about the ambulance service, it was a fascinating trip for all of us.”

“This is a fantastic project that has really brought the site to life and is a great showcase for the children’s creativity.  When complete, the new station will significantly improve the working environment for the staff who are based there.  The new facilities will be of the highest standard and more than meet all of today’s important infection control standards.”

CHAP Construction has been appointed as the main contractor for the £1.3million project to create a new base for the ambulance service in Aberdeen. The centre will replace the original city station, which was built in 1959 and was designed to accommodate 40 staff. The new facility will accommodate 102 staff and a fleet of 57, a mix of accident and emergency ambulances and patient transfer vehicles.

The 44-week construction programme is scheduled for completion by December and Mark Anderson added:

“CHAP is delighted to be working with the Scottish Ambulance Service to deliver a facility which represents a significant improvement on the existing provision. The new building will support the service in its vital work and it is a rewarding project for the CHAP team to be involved with.”

The CHAP Group, one of the north-east’s leading privately owned businesses, is headquartered at Westhill and has a quarrying operation at Park on Deeside. The group operates divisions in the construction, commercial property, house building, civil engineering and quarrying sectors. For further information visit www.chap.co.uk .