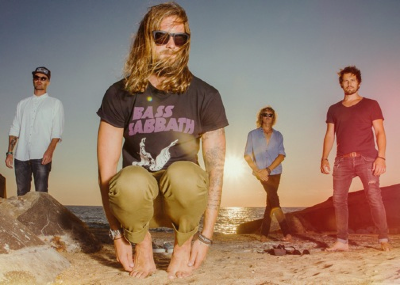 After a great year that has seen them play the prestigious Reading and Leeds and Boardmasters festivals, Sunset Sons, are heading out on a UK headline tour to support their new EP ‘No Bad Days’ (Polydor).
The tour starts at Cafe Drummond in Aberdeen on October 24th.

The Anglo-Aussie four piece have unveiled the official video for ‘Remember’, the lead track taken from their upcoming release,

Shot in the idyllic French surf commune of Hossegor where the band currently live, the ‘Remember’ video perfectly encapsulates Sunset Sons, cutting between shots of friends and locals living in the town and blistering live performance footage.

The tour includes a stop at the riverside venue Tamesis Dock for an intimate 150-capacity show before heading to Koko to play Club NME.

‘Remember’ is being released as part of the No Bad Days EP which is out on October 26th. This EP follows their debut release earlier this year, the Le Surfing EP which garnered much attention and firmly established Sunset Sons as the band to watch for 2015. Building on a dedicated community of fans in coastal UK towns, the band are picking up steam with huge support at national radio and champions in Fearne Cotton and Zane Lowe.