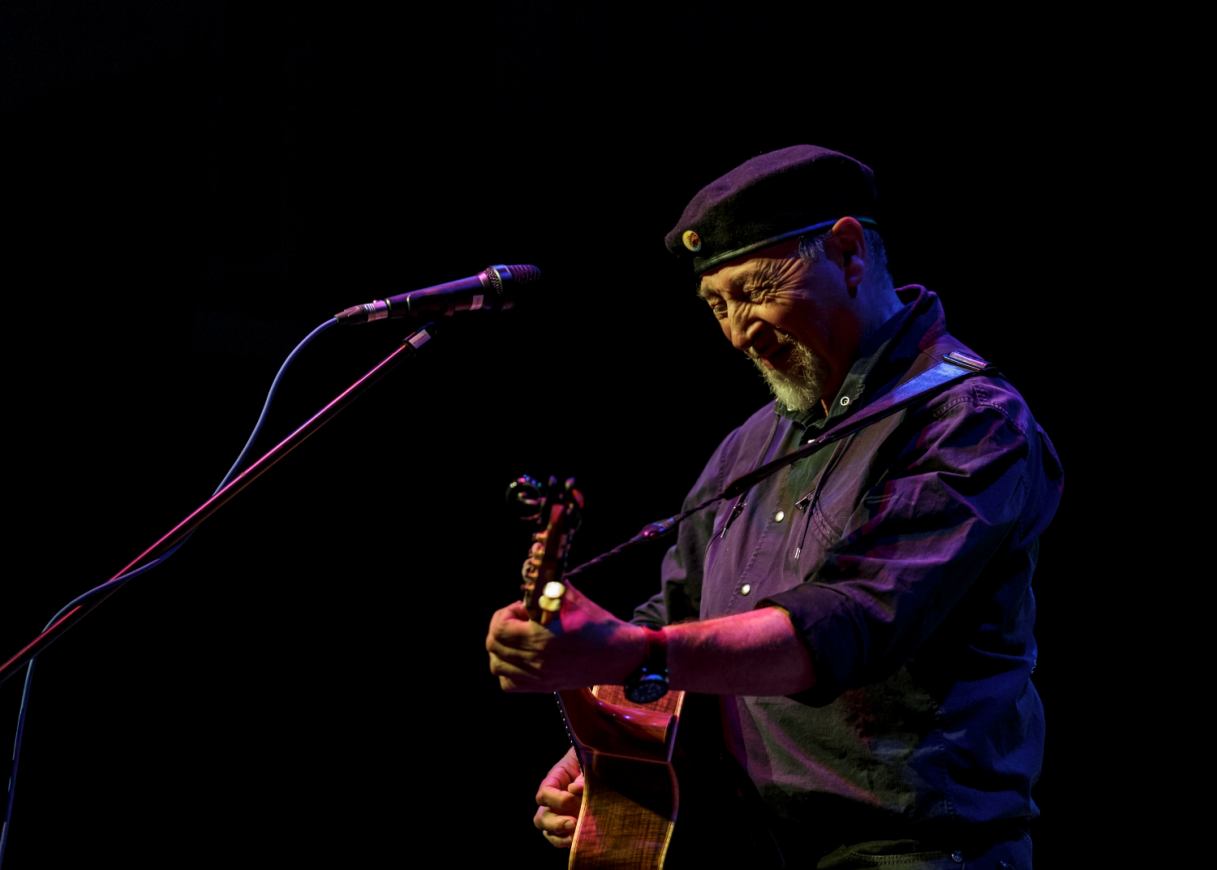 You would be very hard pressed to think of another musician who plays like Richard Thompson, let alone sings or writes like him. You simply won’t find another singer/songwriter/guitarist that even approaches his calibre that has had a career spanning 6 decades, from his days with Fairport Convention through to the present day.

Seeing him over the years has been astonishing in another respect as well, for his voice, vocal range and playing aren’t ageing at all.

In fact, the consensus reached by musicians and fans on his Aberdeen Music Hall performance is that he’s not getting older, he’s getting better (and that’s saying something). It was quite an evening.

The night was always going to be a generational celebration of acoustic guitar. Steve Milne from local act The Little Kicks opened the show. He was, as he admitted, a bit nervous – how could he not have been? His playing and vocals didn’t betray any nervousness as he grew comfortable quickly on stage.

Not only was he opening for a legendary acoustic performer – but his granny was in the audience as well. I hadn’t really thought of the acoustic abilities of the guitarists in The Little Kicks; I’ve enjoyed their electric shows (they have become a fixture at BrewDog AGMs and brewery parties for one thing, and have always gone down a storm).

The lyrics in Milne’s works evoked love, loss, uncertainty and anticipation. He said:

“I was generally really pleased with the set and once I had conquered my initial nerves I felt like I gave a fairly good account of myself and the band/ the songs. The audience were lovely and firmly on side, and I got a lot of kind words at the interval and end, which was really nice.

“Obviously as a local loon the opportunity to play the Music Hall is a massive personal dream of mine and I will as I said always remember that night. Here’s to many more shows there and to hoping it’s not a one off and that I can do it again some time!” 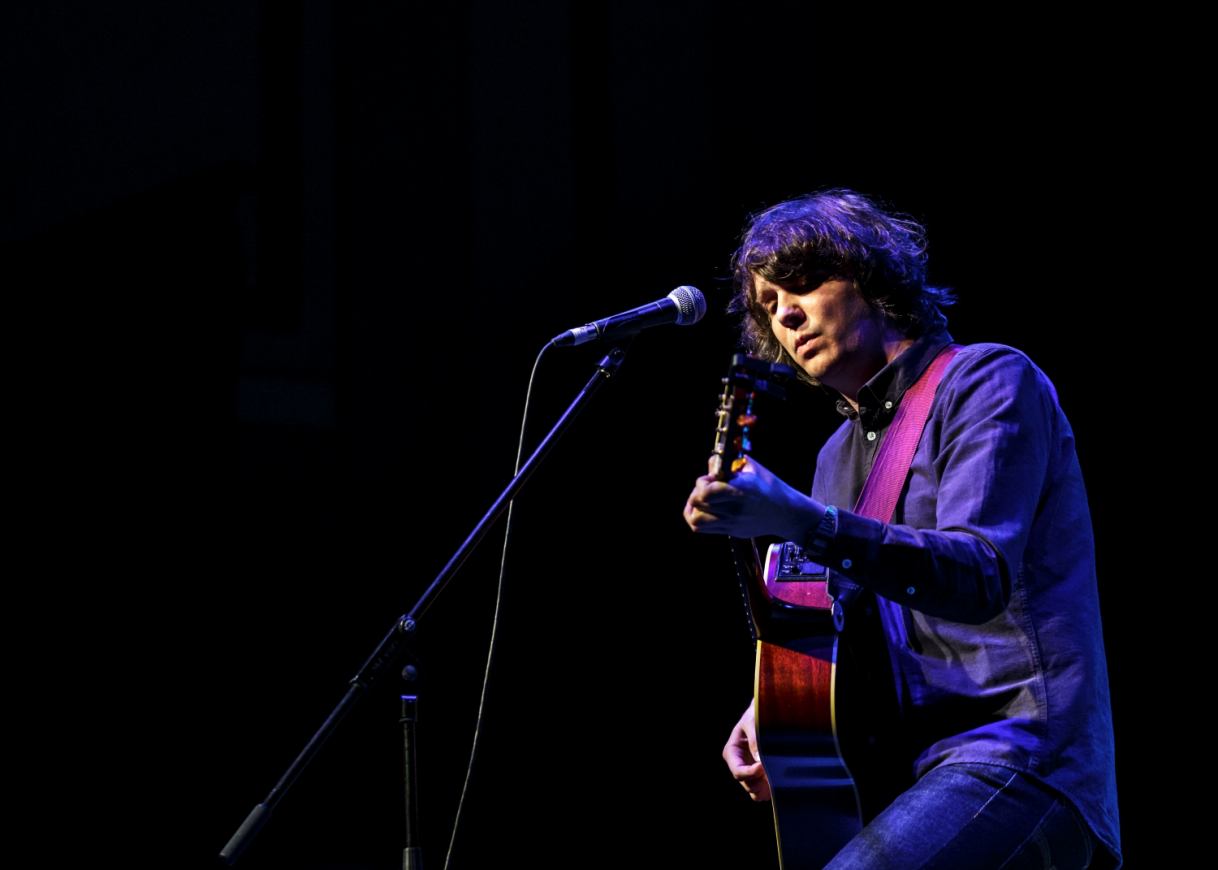 Steve’s set was: Call Of Youth, Girl, Heartbreak Pt 1, Don’t Give Up So Easily, Often (new song), Heartbreak Pt 3, Before Today. All the songs aside from the newbie are available on the last two LKs albums ‘Put Your Love In Front Of Me’ 2013 and ‘The Little Kicks’ 2011 – I picked up the 2013 album on the night.

It always amazes me how he can make a six string sound like there are other musicians on stage with him.

After we walked on stony ground; he had us walking on a wire, a sad, slow number. Richard moved to Valerie which evokes a 1950s rockabilly sound, with some caustic lyrics. The playing is amazing; the lyrics in his works have great twists and turns, assuredly one of the reasons his music is so compelling.

Before long the audience were singing along to a sea-shanty inspired tale of fidelity (or lack of it) in the family life of a travelling ceilidh band musician. The introductory patter has us all laughing; the song’s lyrics are humorously dark and paint a vivid portrait of a dysfunctional couple; Thompson has us singing along on the chorus (which we do enthusiastically, but alas, not all that musically).

He tells us we were marginally better than Tokyo (which is generous of him).

An audience member starts a (slightly too long-winded) chat with Thompson about his recent live appearance on a television cricket programme. Thompson has us all laughing again, and then we’re back to the music.

For me – for many in Aberdeen’s audience – the outing of new song Fergus Lang is a highpoint. This song concerns an <ahem> fictional overblown real estate magnate:

“Fergus Lang is a beast of a man, he stitches up and fleeces
He wants to manicure the world and sell it off in pieces…
Fergus Lang he builds and builds,
but small is his erection…
Fergus has a fine head of hair
When the wind’s in the right direction.” – Richard Thompson

I have no idea why this is so popular with the audience; it’s almost as if there were some local issue or character that this new work hits squarely on the head. (I later discuss the track with Richard, who advises it’s about a fictional character whose self-satisfied, self-indulgent egotism comes at the expense of the environment.

Somehow, that rings a bell. It also reminds me of the excellent TV Smith song, March of the Giants. Both are recommended listening; Richard’s song will be released in the near future). 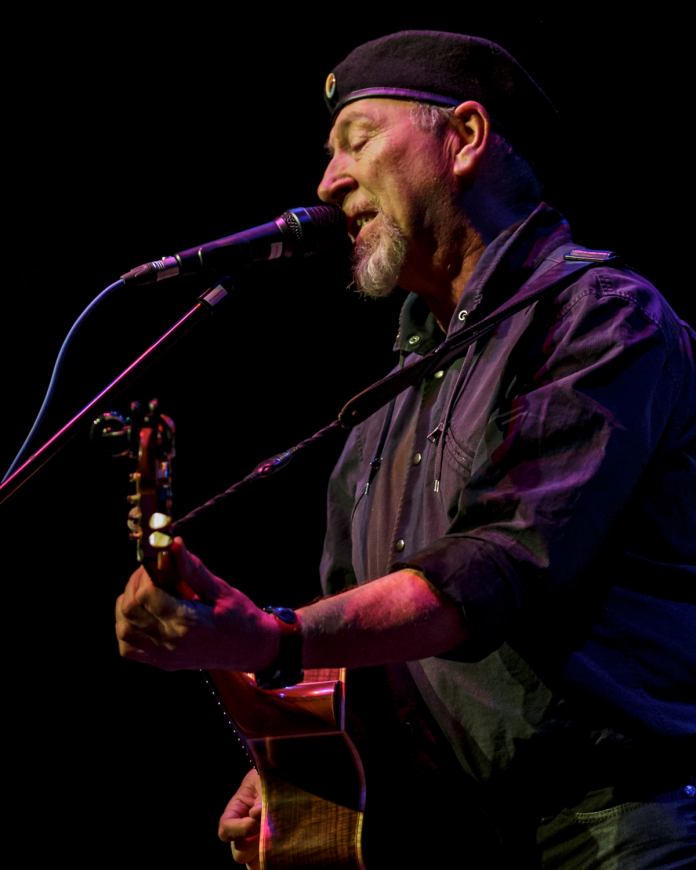 Richard has been doing protest songs for decades; he treats us to Genesis Hall. Safe to say the art of protest is alive and well.

The saying goes, ‘make the impossible possible, the possible easy, and the easy beautiful’.

We are more than an hour into a rich, varied set, and Richard has made the most complex playing and singing seem absolutely effortless and completely fresh. And everyone’s loving every minute.

As we reach the end, Richard explains he is involved in a collaborative Arts Council project concerning World War I.

He plays a slow, pain filled song; its words are taken from letters and cards written by those caught up in ‘the war to end all wars’.

He later tells me of his research in the Imperial War Museum and how moving it was. His grandfather had been in the war, and had been gassed.

Drawing to the close of the set the audience is calling out songs it wishes to hear; he plays Good Things Happen To Bad People, a personal favourite, from the 2013 album Electric, which entered the UK Independent chart at No. 1 when it was released.

Stony Ground is also on this album. We are treated to Saving the Good Stuff For You, which everyone sings along to.

There is a new album out, also in the UK charts; Acoustic Classics contains many of the anthems we’re about to hear. The cheering I Want To See The Bright Lights Tonight is tempered by the stinging Beeswing.

As the Proper Distribution website reminds me as I brush up on my Thompson discography:

“Thompson was named by Rolling Stone Magazine’s as one of the Top 20 Guitarists of all time and considered one of the UK’s most outstanding songwriters and musicians. The recipient of a BBC Lifetime Achievement Award, Mojo’s Les Paul Award and curator of the prestigious Meltdown Festival at the Southbank in 2010, Thompson was most recently honoured with a Lifetime Achievement Award for Songwriting by the Americana Music Association.”

The night really couldn’t have been better (although close to where Julie Thompson – no known relation – was sitting, there were a few incessant chatterboxes who were more interested in speaking than in Richard). It was also quite refreshing to be in an audience and see the performer instead of a sea of disembodied arms rising from the dark theatre holding aloft smart phones recording the show.

There are people of all ages; they’ve responded enthusiastically to Steve and Richard, and the atmosphere was a very positive one.

Richard’s off to York for his next show tomorrow; we’ve all had an amazing evening – old favourites; great banter, young talent, and the protest spirit from the 60s is still there, along with that voice and that playing. I’m off home to listen to my newly-purchased Acoustic Classics, and book another date on this tour.

Acoustic Classics can be found at the usual record outlets, or at http://richardthompson-music.com/ where info on tour dates, news and other merchandise can be found.