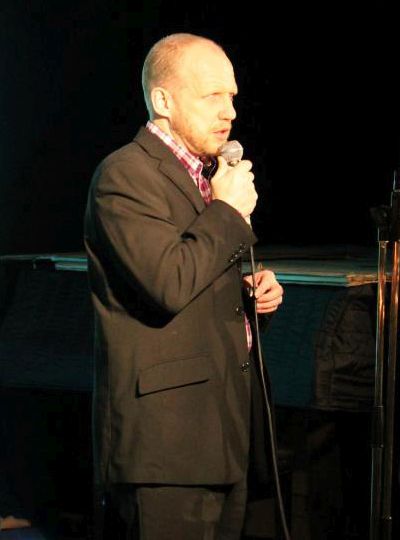 With thanks to DV Press.

Featuring the best in music, magic and comedy from around the North East of Scotland, along with a delicious one-course meal, the show will take place in Belmont Street’s Café Drummond at 8pm on Wednesday 26 February.

Headlining the show is Scotland’s only blind comedian, Neil Skene.

Blind since he was a teenager, Neil has trekked to Everest base camp, bagged over 65 Munros in Scotland, and run the London Marathon. These days he faces an even tougher challenge though… making a room full of strangers laugh!

With quick wit and brilliant humour, Neil is a fantastic comedian who is sure to raise the Drummond Varieties roof.

Also appearing are premier improv group Wildly Unprepared. A hit with The Drummond Varieties audience following their appearance last year, Wildly Unprepared will be taking more of the audience’s suggestions and turning them into hilarious sketches.

Rounding out the line-up are blues-rockers Strange Skies, who will be playing a special stripped-back acoustic performance, and promising Irish comedian Lee Brophy.

The Drummond Varieties is hosted by Aberdonian magician Eoin Smith. He said:

“We’ve been working hard to bring some amazing acts to The Drummond Varieties stage. This first show of the year looks set to be really strong, with some of my favourite performers from around the North East of Scotland taking part.”