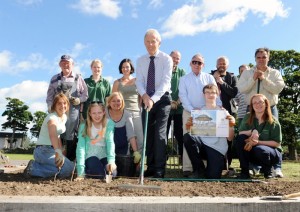 Douglas Craig (centre with rake), Tony Dawson (with sunglasses) and staff and volunteers at Duthie Park.

Yet further improvements are set to be undertaken at Duthie Park after the Friends of Duthie Park received a substantial five-figure financial boost from the city’s Craig Group.
Founded and established for over 80 years in Aberdeen, Craig Group’s global shipping and energy services provide vital rescue and procurement services to offshore industry.

“Duthie Park holds a special place in the heart of Aberdonians and visitors to the city, so we are very pleased to be associated with its revitalisation and the educational resource now available. My father and former chairman of the group, David, was a very keen gardener and it is fitting that our support includes horticultural enhancements.”

The money will be spent on winter bedding and rockery plants, new equipment for the park’s classroom, and to produce the first ever Friends of Duthie Park charity calendar.

“The Craig Group’s generosity is really appreciated and will enable projects to happen that otherwise would not be possible. Producing a Friends calendar has been on the wish list of our group for some time and will now be a reality for 2014. We’re sure it’ll prove very popular, particularly to the significant number of ex-pats who are located throughout the world and for whom Duthie Park holds special memories.”

The calendar, costing £6.99, will be available at DuthiePark, online and at selected outlets.

Duthie Park is among Scotland’s most popular parks, with over half a million visitors every year. It was bequeathed to the city in 1883 by Miss Elizabeth Crombie Duthie in remembrance of her brother and uncle. As one of the finest examples of late Victorian public parks it is included in Historic Scotland’s Inventory of Designed Landscapes and Gardens.

The recent restoration and reconstruction of several lost features was inspired by old written and photographic sources and was funded by the Heritage Lottery Fund and Aberdeen City Council. The restored DuthiePark was officially reopened on 30 June.