In August 2013 a momentous milestone in the history of local publications was reached. Sadly, it went unnoticed by all local media. No flags were waved and no bunting displayed, unless we lay claim to the bunting already in place in Union Street. Alas, no, Aberdeen City Council is not that foresighted. No TV crews sought sound-bite quotes and no fuss was made, apart from mutual backslapping by the editor and several of the contributors, reports Fin Hall. 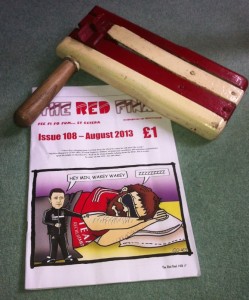 Now this publication may have passed many of you by, but the Aberdeen FC fanzine, The Red Final, is celebrating twenty years of existence. Before the home match against Glasgow Celtic on 17 August, Issue 108 hit the streets and was sold out within fifteen minutes of kick off.
This itself was a bit of a record, allowing vendors, for once, to get into the ground well before the referee blew his whistle to start proceedings.

Perhaps I should explain to the uninitiated what a fanzine actually is, and a bit about their history.

Their roots can be traced back to the heady days of punk when one Mark Perry, not the ex-Aberdeen defender, published a monthly fanzine Sniffin’ Glue. It only lasted a year, was generally badly-written with atrocious grammar, but the energy was there, and over the years fanzines generally moved away from music and popular culture into the realms of football.

Nearly every club’s fans have produced a fanzine at some point, but few have survived. The ethos of a fanzine, a magazine for and, more importantly, by the fans, is to say and report what in many cases the regular papers and magazines don’t print. In the case of a football fanzine, it is without fail an irreverent alternative to match programmes and officially-sanctioned club magazines sold before games.

This is not to say that all programmes are poor, in fact our own local club’s effort is regularly voted Programme of the Year. It really is an informative and excellent read. The Red Final editor contributes a regular column and also writes a Fans View after each game in The Press & Journal, but we don’t hold the latter against him.

Suffice to say, the language and criticism in football fanzines can be ripe and sometimes extremely harsh. But as yet, none has ever been sued or shut down. This is probably due to the fact that its readers are generally in agreement with much, if not all, of the content. Also the people that may be the target of fanzine contributors, are probably unaware of their existence.

The subject of this article, The Red Final incorporating The Granite Kipper, to give it its full and proper title, was born way back in the mists of time, on 18 August 1993, at the club’s friendly match against FC Hamburg, on the occasion of the official opening of the Richard Donald Stand, the huge, overbearing edifice which replaced the well-loved Beach End.

Hamburg’s an important club in the annals of AFC, as the Dons beat them over two legs to win the European Super Cup, which isn’t a cup, but a plaque, of course, ten years before the birth of the fanzine.

TRF was originally helmed by Chris Gavin, or Old Beach Ender (OBE), who would be seen sporting his trusty, well-worn, brown leather jacket whilst selling said publication outside Pittodrie. He continued in this role until he became a club director in 2001.

Although no longer on the board, he can still be still found at the club fulfilling either his fans’ liaison role, or as one of the Aberdeen FC Heritage Trust’s mainstays, the charity whose purpose is to collect club items of historical interest and set up a permanent museum in the new stadium, wherever and whenever that may be.

TRF was not the first fanzine produced by fans of the club. It was preceded in December 1987 by The Northern Light, which ran to 22 issues, before completing its run in October 1992. This came about after conversations between Chris and a certain Dave Watt. An A4 format was chosen and the contents were often, allegedly, printed out, page by page, on their workplace Xerox machines. They adopted a sheep motif dubbed Flossie.

TRF’s format remains the same, but printing is done more professionally by outsourcing. The front cover nowadays is usually in colour, red and white naturally, featuring a cartoon by either Gordon Reid or Gareth Giles, and a quote from history re-interpreted to match the current state of affairs at the club.

Inside the front page one will find the editorial, The Editor’s Bleat. Another nod to Flossie the Sheep.

Thereafter follow contributions of various lengths styles from writers with one thing in common, that they are fervent fans of Aberdeen FC, even if not all still reside in the NE.

As is the wont of such publications, real names are rarely, if ever, used although by-lines are a requirement on submission of articles. The Shepherd, Fray Bentos, Neptune Lodger and The Man In Red, are just some of the regulars who feature.

you can now purchase the latest issue online

Two further Dons’ fanzines have been published during the years of TRF’s existence – The Paper Tiger, published twelve issues from May 1993, ten years after AFC beat Real Madrid to win the European Cup-Winners Cup, until December 1996, and 10 Men Went To Mow, which appeared sporadically in the mid-90s.

Although there is no strict timetable for publication and sale, there tends to be an issue at the beginning of the season, one near the end and one or two during the season. Since the demise of regular, loyal stockist One Up Records last February, TRF has been looking for another similar outlet.

This search has been in vain, and moving with the times, you can now purchase the latest issue online. The intention is to get as many back issues up online, but to date the only one available is number 107. TRF can also be followed on Twitter.

The cover price, quite remarkably in modern times, remains static at £1, the same as it always has been during its twenty year history.

Breaking with tradition though, when the first issue hit the streets two decades ago, it did so, with the giveaway Issue 0. So in reality, the anniversary publication is Issue 109, but let’s not be pedantic whilst celebrating the fact that, although relatively un-noticed The Red Final has surpassed all other fanzines in the country and reached this landmark.