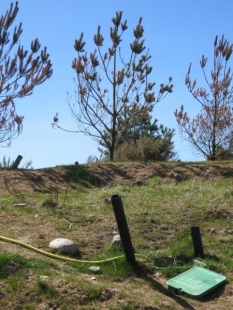 North-east novelist John Aberdein, author of Amande’s Bed and Strip the Willow, was in town for a few days, and found time to take a little tour of the Menie Estate with us.  Here are some of his photographs and reactions.

We arrived at the Menie Estate at half twelve on a lovely, warm Spring Sunday.  Walking towards the Munro property, I knew what to expect.  But when you see the bund separating the Munros from the views and from the sun for the first time, it is unsettling.

The bund increases in height, but it is not just the severe, bulldozed ridge of sand that takes the breath away, it is what is planted on top.

“Is that supposed to be some kind of irrigation system?” John asks incredulously.

A pathetic yellow hose lies unattended, snaked up to a dying tree. 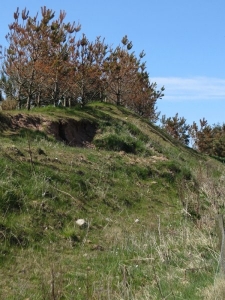 John told us that he’d planted hundreds of  trees as a supporter of ‘Trees for Life’, the Findhorn-based organisation aiming to restore the Caledonian Pine Forest.

Here was a complete contrast. Conifers shovelled into a ridge of sand to be a cosmetic screen for a few months, then hauled out and replaced once they had withered, browned and died.

We all talked about this waste and misuse of living things as symptomatic of a deeper sickness.

We stopped to talk to Susan Munro’s partner, son and friend at their place. Aberdeenshire Planning seem very keen to attempt the impossible and sweep this giant mound of sand under the carpet.

It is far higher than ever agreed when permission was granted. It blocks light and the previous spectacular views.  And it delivers a continuous flow of windblown sand, making Susan’s attempts at gardening difficult if not impossible.

Whether the planners are allowed to call this ghastly thing ‘landscaping’ and whether it will be allowed to slip through as the latest of many retrospective planning applications Trump has lodged remains to be seen.  So far, his batting average for getting what he wants is perfect.

We stop in at Hermit’s Point. “Love that flag”, John says of the black and white ‘Tripping up Trump’ standard flying over the property.  Not for the first time, I impose on Moira’s and David’s hospitality. (My drinks bill would be rather large if it were the clubhouse we were stopping at instead, I reflect).  We discuss issues past, present and future.

John is again astounded at the dead and dying trees staggered around the Milne family home. 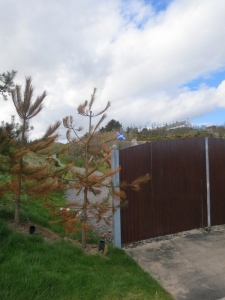 Then we head to the course, slipping by the permanently-locked giant gate between Leyton Farm Road and the parking lot.

What would John make of the course, I wondered. Before we make our way to the dunes – where John used to go running  in the Sixties as a University harrier – I suggest we stop to read the plaque Trump has had erected at the course entrance.

John – like most people I’ve taken there – is speechless for a moment.

The plaque speaks of the course Trump ‘conceived and built… encompassing the world’s largest dunes’ and how it has been ‘delicately weaved’ into the dunes, producing ‘according to many, the greatest golf course anywhere in the world’.

John comments on the ‘grandiose’ nature of this monument to bad grammar and high-octane self-delusion. We all joke about the smaller sand dunes to be found in the Sahara, Death Valley, China.  Whilst out in Peru – as many may know – the Cerro Blanco dune stands 3,860 feet tall and takes at least 3 hours to climb. John wonders why it is important to claim that these are the world’s largest dunes.

“Why can’t people just enjoy them for what they are?” he rightly asks. 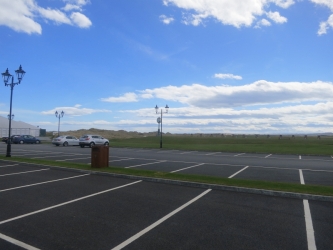 We walk along the tarred road that wends through the course until we can cut to the beach. John comments that, “It’s a beautiful May Sunday but so far I’ve seen only a few golfers way in the distance. I’ve yet to see anyone making a shot.”

We make it down onto the beach, where a breeze from the south is blowing, perhaps the main breeze that makes the dune system move and flow.

There is a Second World War machine-gun pillbox canted over and part-buried.

John heads for a quick swim, then we inspect the putting green that’s close to the sea, really close, the edge just 10 metres or so from the drop-off.

I can’t argue with that. Is it actually nearer the sea than was ever approved? MEMAG, the environmental watchdog, should know, but it’s a struggle to get them to communicate with me. Instead, a smart Trump-uniformed young guy in a buggy drives up, and asks in friendly fashion if we are enjoying ourselves and if we are ‘out walking.’ Not a lot we can really answer to that… 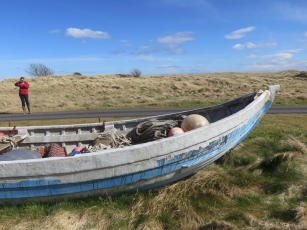 Walking past Michael Forbes’s salmon coble lying full of gear but marooned in the grass, John wonders how on earth the historic access Michael used to have from his own land to the sea can have been taken away.

I explain the police told him he would be charged if he tried to go through the newly-erected gate blocking his way to the shore.

The Aberdeen Outdoor Access officer has mailed me that he would be looking at these issues.

“Sad”, says John as our visit comes to a close.  “Such an air of failure and bleakness. It’s impossible to imagine this place until you’ve been here. Golf courses elsewhere that I know are full of buzz and fun. But any notion of play here seems to have been expunged.” I think this means he probably won’t be booking anytime soon.

So back we go, joking about donating an arm or a leg to buy a round of drinks in the clubhouse. Past that same clubhouse – and out round the big locked gate. We rescue Steve’s springer spaniel from a swamp of black slurry and head back to town.

“Sad” is the word I’ll most remember John Aberdein using.  The sun was shining, the sea was lovely, the people were great and he loved meeting them. But the atmosphere of this sterile, struggling, would-be country club had been boiled down to its simplest description. Sad.

3 Responses to “A Menie Mini Break With John Aberdein”