Tripping Up Trump’s Sue Edwards sees for herself the preparations for the opening of the golf course at Menie Sands and gives an alternative view to what’s been reported in the mainstream newspapers and on radio and TV. 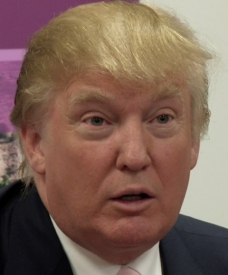 I went to the Menie Estate on Sunday to see how the final preparations were going for the opening of Trump’s golf course on Tuesday.

Dozens of workmen were busy laying turf, erecting gates and planting trees. Lots of titivating was being carried out before the man himself was due to arrive on Monday.

There was even a road-cleaning lorry scrubbing the newly-laid tarmac leading to the temporary clubhouse.

A row of golf buggies were on one side of the new car park, a surprise to me as I thought they were banned under Condition 10 of the Public Inquiry Report.
No doubt the new course and its surroundings will shine like a new pin for those invited to the opening. Trump will have his perfect golf course, with everything that doesn’t suit his style conveniently hidden.

He has painted the row of old Coastguard cottages sparkling white for their owners, but the properties which offend his eyes have been hidden from view. Having failed to persuade Aberdeenshire Council to obtain these properties for him by Compulsory Purchase, he has decided instead to screen them from his golfers.

Pine trees have been planted around the historic old Coastguard station overlooking the temporary clubhouse. Having been dug from other parts of the Menie Estate at the wrong time of year, most have died off, and now their replacements are either dead or dying.

The TV programme Donald Trump’s Fabulous World of Golf shows Trump driving around the dunes. He says to Sarah Malone,

“Sarah, I want to get rid of that house.”

“Who cares? Who cares? You know what, who cares? It is our property and we can do what we want, we are trying to build the greatest golf course in the world.

“This house is ugly. There are some houses quite far away from the course but nevertheless they are in view, but we are *berming some of the areas so that you don’t see the houses. I don’t wanna see the houses. And nobody has a problem with it – I guess maybe the people who live in the houses have …”
http://www.twitvid.com/videos/menieconcerns

*A dictionary definition of berm – A small ledge or shoulder of dirt with some type of vegetation, designed to control water runoff, hide something unsightly such as a power substation.

Leyton Cottage, beside the clubhouse car park, now has a high bank of soil and sand around it to the south and east. The eastern side also has a high wooden and steel gate blocking access to the beach. It is screened to the north by trees.

Until recently, the residents enjoyed uninterrupted views across the dunes, views now blocked by this bank, topped by dying pine saplings. Light to their home is restricted and loose sand is blown into the garden and even into the house itself.

What is a neat grassy bank with shrubs on the golf course side, is a heap of soil, rocks, rubbish, and weeds when seen from the Cottage.

Complaints to Aberdeenshire Council about this high bank have been ignored by the Planning Enforcement Officer, brushed off as ‘a temporary storage of surplus soil’. There doesn’t seem to be any official on the residents’ side.

Residents have been subjected to constant surveillance by security staff employed by Trump. It is hard for us to imagine what it is like to have a security vehicle parked near our home with someone watching at all hours. Only last week a Grampian Police patrol car was outside one of the houses at 3.45 am, and as the owner drove off to work it followed him out to the main road.

So, did those who turned up at Menie Estate on Tuesday to drink champagne and listen to Trump spouting about the greatest golf course in the world, spare a thought for the local residents who have had to live with all of this for the last two years and more, and will live with the consequences forever?

Behind the gloss and glitter and razzamatazz of Trump’s world, did they consider the hidden houses and imagine just what it is like for ordinary, hardworking local people?

Sarah Malone recently stated that 3000 people have signed up to play the new course. According to the ballot on the Old Course at St Andrews, there are just over 256 golfers booked to play today. At that rate, 3000 people could play in just twelve days at Menie.

Can the destruction of the rare dune system and the awful disruption in the lives of the other residents on the Menie Estate really be worth it?’