You’ve Been Trumped,  the highest rated documentary in UK history, will receive its official cinema release in Scotland just days before the ‘star’ of the film can hit the first golf ball on his troubled development near Aberdeen. With thanks to Anthony Baxter. 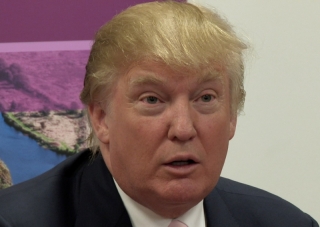 The feature, which scooped up 10 major awards during its global festival run, premieres on Friday July 6th in the home of golf, St. Andrews.

This will be followed by an unprecedented cinema run in Aberdeen, Inverness, Edinburgh, Glasgow, Dundee, Stirling and the Highlands and Islands.

The film will also play in London and selected theatres elsewhere in the UK before opening in the United States in August through Manhattan based International Film Circuit.

Hollywood star Alec Baldwin, who is a ‘great admirer’ of the film, has asked to host a screening during You’ve Been Trumped’s premiere week in New York.

The brand new cinema release version of the film, given a PG rating by the British Board of Film Classification, features fresh scenes – including a moment where Mr Trump appears uncertain as to whether his golf course is situated on the east or west coast of Scotland.  It also features a beautiful, but scathing, song by Scots folk favourite Karine Polwart.

Director Anthony Baxter, who recently received an apology from Grampian police for being thrown in jail while making the film, says:

“The timing is no accident.  We felt it was essential to get the film in front of the Scottish public before Mr Trump’s global hype machine churns into action.  And what better place to open the film than St. Andrews, where you really do find the best golf course in the world.”

Donald Trump’s publicity efforts seem not to be as effective as they once were.  After a disastrous appearance at the Parliamentary committee looking into wind farms Mr Trump has had to change his plans for his opening fourball, which he once predicted would include Scotland’s First Minister Alex Salmond and Sir Sean Connery.  According to press reports, both men are avoiding the launch of the development on July 10th.

Meanwhile emeritus Professor Paul Cheshire from the London School of Economics, the leading economist who predicts in You’ve Been Trumped the economic benefits promised by Mr Trump and Mr Salmond would never materialise, says he has been proven right and that Donald Trump’s objections to wind farms are a diversion.

“Mr Trump seems to be using the offshore wind farm plan as a way of saving face while kicking sand in the face of the Scots.  The people of Aberdeenshire have sadly lost a habitat of wild beauty for no noticeable economic gain.”

“Thus far, only a handful of full time jobs have been created by the resort, just a fraction of the 6,000 promised by Mr Salmond and Donald Trump.”

Leading geomorphologist, Dr Jim Hansom of the University of Glasgow, who gave evidence against the Trump plans at Scotland’s Parliament on behalf of Scottish Natural Heritage, is warning fellow Scots not to be fooled by glossy newspaper and TV images of green fairways.

“What was once a wild, dynamic and inspirational place is now just another manicured and polished piece of coastal real estate.  Mountains of sand trucked in and bulldozed into shape are concealed by a superficial veneer of golf-course green.  A human-made place and a wilderness destroyed.”

3 Responses to “Coming Up Trumps: Film and Golf Club Both Open”