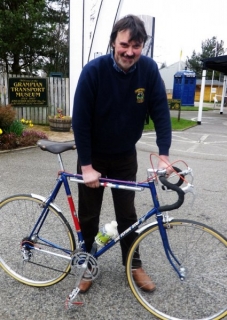 A high-performance bicycle that belonged to world famous comedian, Billy Connolly is now on display at the Grampian Transport Museum in Alford. The loan came about after coverage of another of Billy’s vehicles- his world tour motortrike- appeared in the media at the start of April.
The bicycle is one of the famous ‘Flying Scot’ brand built in Glasgow for many years by David Rattary & Co and thousands of the bicycles were made before production ceased in the early 1980’s.

Billy was gifted his at a young age and cycled for miles on it including over the ‘Rest and be Thankful’ one of Scotland most arduous climbs. The current owner saw the bike advertised on internet auction site, Ebay and successfully bid for it.

“We were really pleased when the owner got in touch with us offering a loan of the cycle. It is a fantastic piece of cycle technology and it ties in wonderfully with Billy’s motortrike which is also on display here.”

The addition of the ‘Flying Scot’ comes just a few weeks ahead of ‘CycleFest’ which is being held at the museum on Sunday 19th May. The event will see a variety of youth races as well as the Scottish National Road Race Championship around the Alford area.

The ‘Flying Scot’ is on display in the museum now and features within a chronology of cycling with the 200th anniversary of the bicycle just a few years away.