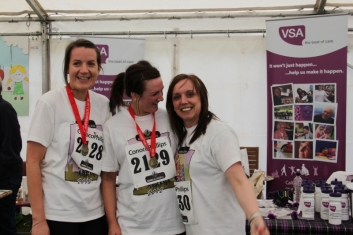 On Sunday 3 February 2013, Voluntary Services Aberdeen launched an appeal for athletic locals to support it at the annual Balmoral Road Races. Budding athletes have been invited to pick which part of the charity they want to fundraise for, from a selection of more than 30 VSA services.

VSA has spaces in both the Conoco Phillips 5k race and the Stena Drilling Tartan 10k.

Debbie Fotheringham, fundraising officer at VSA, is leading the quest for competitors:

“We’re delighted to be part of Run Balmoral again.  This year, we’re passionate about making sure our runners know that they can raise money for something that matters to them.  Asking people to sponsor you is never easy.  But if it’s for something important to you, it’s a million times easier.

“VSA is such a diverse charity.  I think that, for almost every person out there, there’s a service that means something.  We support babies, children, adults with mental health difficulties, children with additional support needs, carers, young carers and older people.

“You might want to run to raise money to send our hardworking young carers on a well-deserved trip or to buy an iPad so that our older people can Skype their overseas relatives.  You could even run to raise money to buy a goat for VSA’s Easter Anguston Farm in Peterculter.  The list is long and flexible.”

“Last year we attracted a variety of runners, including me and a colleague.  I’m taking a break this year but I’d love to hear from people of all ages and abilities.  In 2012 we had marathon champions, regular runners and first-timers trying to keep their New Year resolution of getting fit.  But it’s not just about the running.  The Balmoral Road Races is really fun family day out.”

To book a place or to find out more about running for VSA at Run Balmoral, please contact Debbie Fotheringham on 01224 212021 or e-mail Debbie.fotheringham@vsa.org.uk