This is the second article produced by Aberdeen and District CND on the economics of the UK nuclear deterrent system Trident. This article relates to the economics of the Scottish situation last week’s article looked at the wider UK. We would recommend that you read both articles. With Thanks to Jonathan Russell.

The STUC/CND report of 2007 demonstrated the inaccuracy of claims that upwards of 11,000 jobs would be lost to Scotland if Trident was not replaced. It found that the loss of Jobs would be (only) 1,800.
In a recent article in the Scottish CND Magazine John Ainslie has said that there are less than 500 civilian jobs in Faslane and Coulport which are directly involved in supporting the Trident weapon system.

To put this in perspective, up until 2007 over 40, 00 Scottish Defence related jobs had been shed since 1990 without significant government intervention to ensure alternative employment.

The working party had the following to say on the economic effects of not renewing Trident.

“The UK government has made significant investment over the years in upgrading the facilities at HMNB Clyde, including £300 million in the past two years and has announced that HMNB Clyde can have a continuing role as a strategic naval facility for conventionally armed naval forces, to take advantage of significant assets already in place and the UK  governments maritime change programme offers the opportunity in the long run for stability of employment, without nuclear weapons at HMNB Clyde.”

The effect of expenditure on Trident replacement on Scottish budgets, in the context of future Comprehensive Spending Reviews, will have a negative impact on public expenditure in Scotland with a corresponding effect on jobs: the STUC/CND investigation estimated that replacing Trident could cost Scotland 3,000 jobs.

The working group considered that a planned programme of defence diversion adequately resourced, could ensure that an equivalent or greater number of jobs can be created in the local economy.

The more recent BASIC commission report by Professor Keith Hartley points out that though Glasgow is an area of high unemployment it is part of the wider Clyde economy where there are alternative job prospects. Staff and facilities are in the main transferrable however some staff and facilities are so highly specialised that they can only be used for submarine work.

Aberdeen has 12 firms that would be affected by the replacement of Trident. With an average spend of just under two million on each firm involved in Scotland this would affect the Aberdeen economy.

Government would require appropriate policies to adjust to these changes. It must be remembered that spending in other ways would lead to more jobs .

Choices have to be made about what it is best to spend public money on.

Of course firms like BAE systems and Babcock’s would argue differently. We would argue that this money, however it is spent; it should not be on the renewal of Trident.  Further the priority should not be on military spending unless aimed at developing our role in peace keeping.

On another front we would question our priorities; Global climate change is emerging as a major future security challenge. 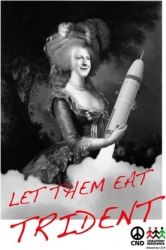 The credit crunch and global economic meltdown has compounded pressure on the affordability of Britain’s Nuclear weapons.

The time is ripe to stop the replacement of Trident and it would be one significant step in getting rid of Nuclear Weapons worldwide; it could further help us start concentrating on the real problems we face, both at a UK/SCOTTISH and world level.

Aberdeen and District CND have monthly meetings at 7.30pm on the second Monday of each month held on the top floor of the Belmont Cinema, Belmont Street, Aberdeen.
http://banthebomb.org/AbCND/index.php/CND