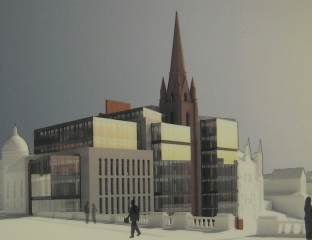 It may not be well known to the people of Aberdeen, but a major city-centre development is in the pre-application public consultation phase. This is the proposed office block development for the largely-derelict Triple Kirks site opposite the art gallery. The plan put forward by Stewart Milne Developments shows a 7 storey series of glass boxes set in a steel plinth and is partly granite cladded.

The plan also envisages two storeys of car parking with entry from the Denburn dual carriageway. The spire of the original Triple Kirks is to be kept and is shown sandwiched between two of the glass blocks.

The public consultation consisted of two sessions which were held on the 3rd and 4th of December. There is also a website, where comments can be made by the public as part of the consultation.

There has been very little in the local press about the development. The Evening Express showed a copy of the plans, but surprisingly given the importance of the site, no details were given in the Press and Journal. 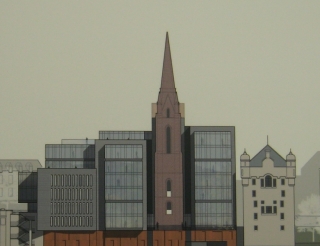 The Triple Kirks – three separate churches built around a common spire – might be regarded as a kind of cathedral of the Free Church in Aberdeen, and was certainly about the size of a (small) cathedral. Designed by Archibald Simpson, it shows some similarity to the Elisabethkirche in Marburg,  brick-built churches being common in northern Europe.

Cost was a major consideration; and the bricks used are believed to have been recycled from the former Dee Village in Ferryhill on the site later occupied by the coal-fuelled electricity works, later the Hydro Board. Consequently these bricks were probably a couple of hundred years old even in 1843!   The Triple Kirks tower and spire is of granite sheathed in brick.

John Betjeman wrote approvingly of the Triple Kirks, noting that the spire glows red in the setting sun.  It is visible from a great many places in central Aberdeen and is a key component of the parade of turrets, towers & spires along Belmont Street and eastward, presenting the aspect of a medieval German or Mitteleuropan cathedral city.”

The churches had fallen into disuse by the mid 1980’s, and about that time the site was bought by Barratt the builders. Plans for an office block on the site were submitted to Aberdeen Council. I visited the Planning Department at the time to inspect them and was unimpressed. They showed a simple steel and glass office block typical of the time, a bit like a smaller version of St Nicholas House albeit with mirror glass.  I was one of the few to object to the plans and the objections were upheld by the planning committee.

Barratts made a successful appeal on the decision to Sir George Younger, the Secretary of State for Scotland in Maggie Thatcher’s government.  Sir George, did however, decree that the spire had to be kept. No time was wasted in demolishing the churches on the site (one or part of one remains as the Triple Kirks pub). However, no office block was ever built and the site has remained derelict for 25 years. 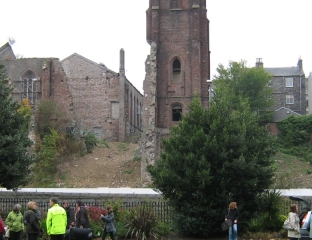 There is no doubt that something needs to be done with a part of the city that many see as a major eyesore. Nevertheless, not everybody is happy with the current proposal. It doesn’t look right; the scale of the office blocks is too large compared with the steeple and the building has a bloated rather bizarre appearance as a result. The blocks are too high compared to the skyline of the surrounding buildings. A five storey building would be more in keeping here.  Additionally, the style of the building is unimaginative.

The nearby buildings, as Alex points out, have turrets and spires creating a gothic motif. It wouldn’t have taken too much flair to have designed a building with some concession to the prevailing style, but sadly this hasn’t happened. It is to be hoped that the planning committee will ask for some changes to be made to these plans to produce a building more sympathetic to its surroundings but I wouldn’t hold out too much hope of this.

No Responses to “The Proposed Triple Kirks Development”