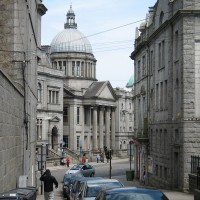 With the fate of Union Terrace Gardens much in debate at the moment, the preservation of Aberdeen’s heritage is a major issue within the city. In this light, the annual lecture of the Aberdeen City Heritage Trust given at the Town House on Tuesday 22d June was topical. The title: “A future for granite in the granite city?”

Dr. Ewan Hyslop of the British Geological Survey talked about the building stones of Scotland and granite in particular. Scottish geology varies so much, that there is a legacy of each Scottish town showing a distinctive architectural style according to its local building materials. For example, Glasgow is built from ‘blonde’ sandstone, Stonehaven from the old red sandstone and Aberdeen in grey granite.

These buildings give a very strong sense of place and identity to our towns and cities.

However, there are far fewer stone quarries on the go today compared to a hundred years ago and modern buildings are largely built from concrete. Many of the modern buildings constructed in Scotland could have been built anywhere in the world, and with each new building replacing a stone-built predecessor, subsequently there is a gradual erosion of the unique local identity of Scottish towns.

Aberdeen in particular has an international reputation for its granite buildings. There is a large variety of quality building stone used, from the grey Rubislaw granite to pink Peterhead granite. The granite reflects light in a certain way and gives a uniquely distinctive look to the city’s architecture.

Colin Tennant from the Scottish Stone Liaison Group noted that many of the stone buildings of Scotland were in a bad state and need repair and maintenance to be sustained. There is a limited amount of preservation work going on in Scotland, but not to the extent that is required given the scale of the problem. Public money is limited and there are not that many stone masons left in Scotland. There is a sense that we have lost touch with our history of building materials.

Aberdeenshire has two remaining granite quarries at Correnie and Kemnay. Both quarries work on a demand only basis, for instance Kemnay having supplied granite for the building of the Scottish parliament. These 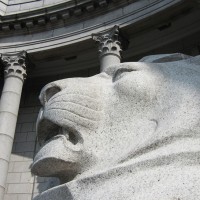 days it is cheaper to import granite from China, India and Portugal rather than to quarry it locally, although the stone quality is considered inferior to the local variety. Every now and again the question arises as to whether the Aberdeen granite industry could be restarted. Interestingly, a 1992 report on the market potential of Scottish granite considered that the quality of the local stone would provide a quality product.

Yet, ACSEF (Aberdeen County and Shire Economic Futures), the local quango charged with driving the region’s economic future, has no stated initiative for restarting the local granite industry. The organisation is proposing a programme of major growth in the city and shire, including the Energetica scheme, a 30 mile development corridor between Aberdeen and Peterhead with a concentration of energy technology companies. A flagship policy is to replace the Victorian Union Terrace Gardens with a commercial development and a modern city square out of keeping with the surrounding architecture. There is a danger that without a focussed initiative on preserving local heritage and ensuring that new buildings are in keeping with the existing ones, the special character of Aberdeen will be gradually lost and our city will start to look like anywhere else.