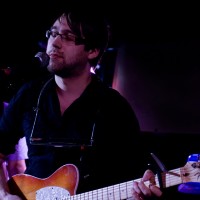 The Deportees in concert.

The Deportees are a 5-piece folky-rocky-country-ish tuneful outfit from Aberdeen. It would be unfair to lump them into a specific genre, hence the rather linguistically-incorrect introduction, but they certainly have a discernible folk influence with a strong emphasis on vocal harmonies. They’re recently formed and deserve checking out.  Singer and guitarist Adam Keenan spoke with Aberdeen Voice’s Ross Cunningham.

“Four of us already knew each other,’’ Adam explained, when asked how the band got together. “Our drummer Christy and I were introduced through our parents in about 1983; Ricky (guitar) and I met through Tennents Velvet around 1993; Adam, who plays bass, and I were introduced by JJ Bull about seven years ago and in 2009, fate introduced us to Diarmaid. He was the only person who responded to our ad for a piano player and luckily for us, he’s one talented dude.’’

Deportees’ members’ previous form includes Edgar Prais and 10 Easy Wishes both of whom sounded heavier than the current band. Is the more melodic Deportees’ sound due to the guys mellowing with age and different influences?

“You’ve hit the nail on the head there,’’ Adam enthused. “Inspiration-wise, I think a songwriter always ends up gravitating to the music he listened to as a child.  To me, it was American country folk  and British folk,  mainly Celtic. I have my parents to thank for that.  These songs are timeless, the melodies simple, often borrowed, and the sentiment pure.  I don’t listen to a lot of modern music, if I’m honest, but the stuff I do listen to usually nods its head towards influences similar to my own.  I do like my rock, especially the darker-edged stuff, and I suppose that comes out in the songs too.’

“There’s a definite sense that the music I write for this band is more natural and genuine than I’ve written for bands in the past.  Not that I’ve ever tried to write to a formula, but with my last band, towards the end I couldn’t write songs for us anymore because the stuff that was coming out was, I suppose, the early drafts of what would become The Deportees’ material. Christy and I had talked for years about playing in a band like the Deportees but the timing was never right.  Patience brother, patience.’’
Of contemporary bands such as Mumford and Sons and the Fleet Foxes and the folk influence on them, Adam was quite clear, “For a start I don’t really think Mumford and Sons can be deemed a folk band. To me, a dobro or mandolin does not make a folk band. They’re very good and in modern music terms quite a refreshing band, but folk? I don’t think so.’’

‘’I think folk does have relevance in the mainstream nowadays but not in the sense that it’s an identifiable genre like rock or emo or hip hop.  People call it folk because they can hear a banjo or fiddle in it; they want to label it as soon as they can so that they can understand it, make sense of it, digest it and, most importantly, manufacture it.

“Real folk references in modern mainstream music are more subjective and more subtle.  The Decemberists harbour a clear folk influence, but they also clearly identify with British metal, with the likes of Black Sabbath and Led Zeppelin .  There’s no doubt though, that Colin Meloy knows his folk. He’s grounded in it, he’s a scholar, but his folk references aren’t particularly Celtic.  As for the guys who are striving to keep the Celtic tradition alive, look no further than Roddy Woomble.  There’s a guy who knows how to hum a wee fiddle motif.  The folk scene’s alive and well but you won’t see it breach the mainstream anytime soon.’’
Like so many of us, Adam is disappointed with aspects of the contemporary scene. “I wish there was fatigue with the manufactured band scenario, but I feel that it’s embedded so deeply in the public unconsciousness in this country, we don’t even realise anymore.  For instance, Mumford and Sons might be a genuine bunch of lads, and talented to boot, but if it hadn’t been for some industry type piping up, “You guys need to start dressing up in charity shop rags and scarecrow hats, or else you’ll be playing in wee coffee shops the rest of your days”, then that’s exactly what they’d be doing.  I mean, there’s nothing wrong with that at all. A guy’s got to make a buck, but it demonstrates how it’s all manufactured. Pop Idol for pop; Pop Idol for rock. We’re told what to like and we lap it up.  There’s no going back from that, but there’s no in point crying about it either. It’s just modernity’.

The conversation turned to how the band go about creating their music.

“Well I’m the main songwriter for the band,’’ Adam explained. ‘’I’m the one who takes the initial drafts to the table.  Sometimes it will be a fully-actualised song, but more often than not it will be pieces of a song – a verse/chorus combo, a riff, a melody.  I hate the dictatorial approach whereby the songwriter writes the piece, then tells the band what to play. Where’s the fun in that? You don’t learn much about yourself or the band if you approach songwriting in that way.  With us, it’s a collaboration for sure. Everyone’s a contributor and everyone’s talents lie in different departments, which is why I think our sound is so varied.’’

As for The Deportees’ future plans, Adam simply replied, ‘’We’ve got no plans but plenty of ambition.’’