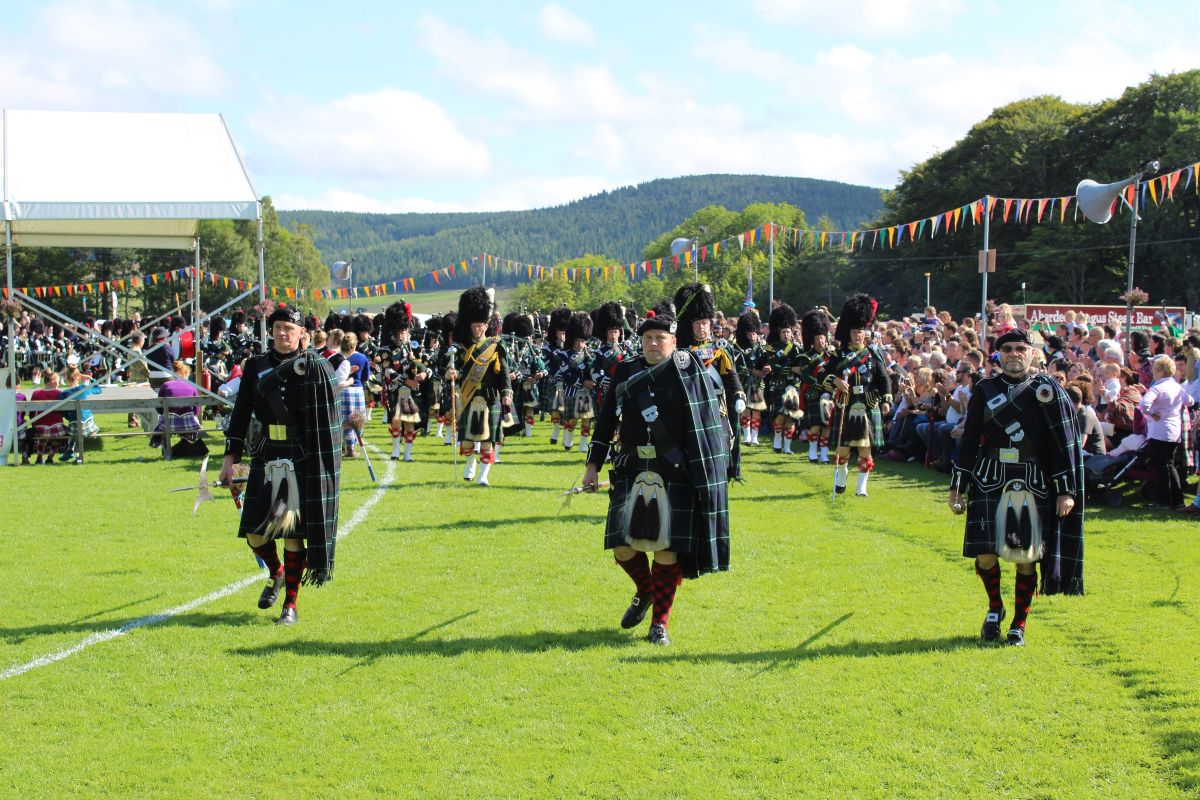 Visitors from around the world flocked to the small Aberdeenshire village of Bellabeg last Saturday (26 August) to witness one of Scotland’s most iconic spectacles.
For the 176th time, the Lonach Highland Gathering and Games took place in the picturesque Strathdon valley and with it a tradition that stretches back nearly 200 years.

Dressed in full highland regalia, 170 kilted Lonach Highlanders followed in the footsteps of their forefathers to celebrate the history and heritage of the local area.

Armed with eight-foot long pikes and Lochaber axes, and carrying the colourful standards of the Lonach Highland and Friendly Society, the men, led by the pipes and drums of the Lonach Pipe Band, set off at 8am to embark on a six-mile march en route to the Highland Games. Along the way, the parade halted at six properties. At each, with a dram of whisky and to the cry of ‘Ho Ho Lonach’, the men toasted the health of the property’s owners, the society and the local area.

At one o’clock the Highlanders marched into Bellabeg Park to officially open the 176th Lonach Gathering. They were greeted with enthusiastic cheers and applause from a crowd estimated at 7,500 which packed the grandstands and stood five to six deep in places around the arena. The day was blessed with bright sunshine and warm temperatures, only interrupted by occasional light showers in the morning.

Following the Lonach Highlanders every step of their march, pulling the traditional ‘cairt’ was Socks, the Lonach horse. Owned by Derek Gray of Kildrummy, the eight-year-old Irish Heavy Cob was making his third appearance at the gathering and received a hearty reception from the spectators.

Organised by the Lonach Highland and Friendly Society, the Lonach Highland Gathering and Games has been held annually since 1832, except during the years of the first and second world wars. Staged on the fourth Saturday of every August, the event gives a huge boost to the local area.

Visitors travelled from throughout the UK and overseas to experience the unique and emotive march of the Lonach Highlanders and soak up the friendly atmosphere at one of Scotland’s leading Highland Games.

A packed programme of over 70 events featured throughout the day. There were displays of strength and stamina in the light and heavy athletics, and intricate footwork on the highland dancing boards. Solo pipers and four local pipe bands provided a musical soundtrack for proceedings.

The popular four-mile hill race attracted a field of 70 runners. Henry Gordon-Hart from London won the men’s race, while the first female home was Stephanie Provan of Aboyne.

Also taking part in the hill race was Lonach Highlander George Reid. The 63-year-old from Tomatin went on to compete in the inaugural Great Aberdeen Run 10k race the following day wearing his Highlanders’ uniform.

A strong field of entrants featured in the heavy events, which saw a new shield being competed for in the open caber event. The shield was presented to the Lonach Highland and Friendly Society by the family of Society stalwart Rob Walker who died earlier this year. Mr Walker who farmed in Strathdon his entire working life, was a member of the society for 70 years, having first joined in 1947.  Lukasz Wenta from East Kilbride received the shield from the family after winning the open caber event.

The ladies tug o’ war competition was again fiercely contested, with the Glenbuchat Ladies proving victorious over Lonach Ladies and the Rest of the World team made up of ladies from throughout the UK and overseas.

Illustrating the international draw of the Lonach Gathering were two photographers from the National Geographic magazine. The duo, who photographed the event in 1991, returned to capture proceedings for an upcoming Dutch edition of the publication.

Three new Lonach Highlanders took part in the march for the first time. They are among six new members of Lonach Highland and Friendly Society, whose membership currently numbers 227. The oldest Lonach Highlander marching was 77-year-old marshalling sergeant George Thomson from Strathdon.

“The spectacle of Lonach and the march of the Lonach Highlanders never disappoints. Bellabeg was abuzz all day and it is wonderful to see. Every year, I look round the arena as the Highlanders march past and without fail there are beaming smiles and emotional faces in equal measure amongst the crowd. Lonach tugs at the heartstrings.

“Although the Highlanders are the stars of the show, they are slowly being upstaged by Socks the horse, who is becoming quite the attraction. He got a rousing welcome from the crowd as he entered the arena and plenty of people were taking selfies with him later on.”

“We saw some very closely fought competitions on the field today, which is great for everyone to see. Tossing the caber, the hill race, the tug o’ war pulls and the children’s races all gained vocal support from spectators. The pipe bands also drew large crowds. Overall, it has been a brilliant day and we thank everyone who has been part of it.”