A protest is to take place at Trump International Golf Course on Saturday 9th Sept 12 noon in opposition to the frightening standoff between the US and North Korea. With thanks to Jonathan Russell Chair Aberdeen and District Campaign for Nuclear Disarmament 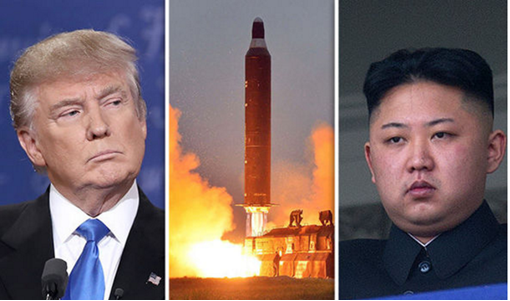 The cycle of threat and counter-threat is creating an appalling situation in which warfare between nuclear states is being discussed as a serious option on both sides.

Trump’s outbursts against the North Korean regime are deeply troubling. What impact can threat’s of ‘fire and fury’ have but to escalate tension and increase the likelihood of a catastrophic confrontation?

The urgent priority must be the opposite, to de-escalate and pursue a negotiated resolution to the crisis, which major players in the region are trying to achieve and most commentators recognise as possible.

China and Russia have put forward a proposal that the United States, Japan and Korea stop its military exercises and North Korea suspend its ballistic missile programme.

This would, however, require a sharp change of direction from both sides, including from the US, which has dramatically increased its military capabilities in South Korea and its military presence in the area. Already US B-1 bombers capable of delivering nuclear weapons have flown from Guam over the Korean peninsula, joining the South Korean and Japanese air forces in joint exercises.

The North Koreans have fired a missile right across Japan. Such provocative actions on both sides must end. We must demand our governments focus on a peaceful resolution to this confrontation.

The alternative is not worth contemplating as not only would the Korean people who historically have already faced huge suffering be effected but China could also be dragged into a war which could include the use of Nuclear weapons. Leading to parody Trump to fire and fury like the world has never seen. We have to hope that sense will prevail.

Don’t let Trump and Kim Jong-Un lead us into Nuclear War. Protest at the entrance to the Trump International Golf Course by the A90, Saturday 9th Sept 12 noon.

The standoff between the US and North Korea is frightening. Be part of the protest which will present an open letter to Trump International Management.