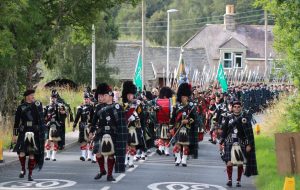 The Lonach Highlanders set out following in the footsteps of their forefathers on their traditional six-mile march round local six properties.

The history and heritage of one of Scotland oldest and most iconic highland games was celebrated on Saturday (27 Aug) in the Aberdeenshire village of Bellabeg.

Thousands of visitors from across Scotland and further afield attended the 175th Lonach Highland Gathering and Games and witness the unique and emotive march of the Lonach Highlanders.

An estimated crowd of around 9,000 packed into Bellabeg Park in Strathdon to watch the day’s proceedings, which enjoyed warm dry conditions with long spells of bright sunshine.

To mark the 175th anniversary games, the Lonach Highlanders, believed to be the largest body of non-military men to carry ceremonial weapons in Britain, were joined on their marches by Europe’s only private army, the Atholl Highlanders.

In total, 210 individuals dressed in full highland regalia, which included members of both highlanders’ pipe bands, took part in the day’s marches. There were 170 members of the Lonach Highlanders armed eight-foot long pikes and Lochaber axes, and 40 Atholl Highlanders carrying Lee-Metford rifles.

The day’s proceedings in Strathdon began at 8am as the Lonach Highlanders set out following in the footsteps of their forefathers on their traditional six-mile march round local six properties. The glen came to life as the still morning air was broken by the strains of the pipes and drums of the bands, the footsteps of marching highlanders and sound of the following horse and cart.

At each of the six stops the highlanders received a dram from the properties owners, continuing a tradition begun by their predecessors.  The highlanders toasted the health of their hosts, the society and the local area, with the cry ‘Ho Ho Lonach’ resounding through the strath.

Five new Lonach Highlanders took part in the march for the first time. Membership of the Lonach Highland and Friendly Society currently stands at over 230.  The oldest Lonach Highlander marching was 76-year-old marshalling sergeant George Thomson from Strathdon, while the youngest was 16-year-old Bradley Joss from Kintore, who was among three generations of his family marching.

The 175th anniversary of the gathering was also marked with a display of old photographs, which charted the evolution of the gathering and the changing fashions of its visitors. Some of the photographs dated back to the 1890s. Many had been donated by society members and regulars to the Lonach Gathering who were keen to share their memories of the event. 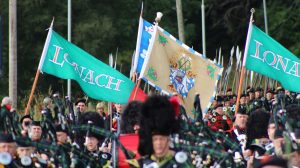 Crowds packed the grandstands and stood up to six deep in places around the main arena to watch proceedings, with the heavy events, the hill race and highland dancing receiving enthusiastic support.

The Lonach Highlanders, the Atholl Highlanders and the massed pipe bands received rousing welcomes as they circled the arena.

However, the loudest cheers were reserved for Socks, the Lonach horse, who made his second appearance at the games pulling the traditional ‘cairt’. Owned by Derek Gray of Kildrummy, Socks is a seven-year-old Irish Heavy Cob.

Six pipe bands from across Scotland performed at the gathering. Lonach Pipe Band was joined by the Pipe Band of the Atholl Highlanders, Ballater and District, Huntly and District, Towie and District and the Pipes and Drums of the Royal Guard from 2 SCOTS – the Royal Highland Fusiliers.

The gathering featured a full programme of traditional highland events, including solo and massed piping, highland dancing, children’s races, and light and heavy athletics, with some of the country’s leading athletes competing.

A field of over 90 lined up to tackle the four-mile hill race. The men’s race was won once again by James Espie of Dinnet, while the first lady home was Aboyne’s Stephanie Provan and the first Lonach Society member to finish was Neil Gauld of Midmar.

A keenly fought contest took place in the ladies tug o’ war, with the Glenbuchat Ladies proving victorious over Lonach Ladies and the team made up of ladies from the Rest of the World.

“It was a fantastic day from start to finish, with a brilliant atmosphere. The Lonach and Atholl Highlanders created a real spectacle and their combined numbers made it one of the largest marches we have seen. The reaction from those watching was quite something and generated a few tears amongst the crowd.

“Our 175th gathering is a hugely important milestone for the society and it was wonderful to see so many people here to help us celebrate it. The gathering has been a constant in a changing world and this was beautifully documented in our display of old photographs which received a lot of attention from visitors, and generated much laughter at some of the fashions.

“The gathering has always given the local area a huge boost, both socially and economically, and it is important that we maintain that. Our heritage is vitally important to preserve and with a number of young new members joining the society in the past year the future of Lonach looks bright.”