Thousands of visitors are expected to descend on Aboyne Green this Saturday as the town holds its annual highland games. Founded in 1867, this year’s Aboyne Highland Games will mark the 150th anniversary of the popular Royal Deeside event.

Up to 10,000 people from around the world are expected to attend the event, which is held under the patronage of Granville Gordon, the 13th Marquis of Huntly.

A packed programme of 98 traditional highland events will be held throughout the day, including solo and massed piping, highland dancing, light and heavy athletics and fiddle competitions.  Over 80 trade stands, children’s races and a funfair also feature.

To commemorate the games’ milestone anniversary, organisers have created a memory book containing old photographs from bygone years. The book also includes written contributions from members of the public who have spectated or competed at the games, or been involved in its organisation. It will form part of a display of games memorabilia which is expected to prove popular with visitors.

Among those visiting will be hundreds of representatives from the 10 Scottish clans featured in the event’s Clan Village. This year the clans that will be represented are Burnett, Cochran, Findlay, Forbes, Fraser, Gordon, Hay, Leask, Leslie and Strachan. The Burnett clan is expected to have the largest presence, as around 200 clan members are travelling to the north-east from around the world as part of a week-long gathering.

Events on Saturday get underway at 10am, when the massed pipe bands march through the town and onto Aboyne Green, heralding the start of the day’s competitions. The games will be officially opened at 11:15am by the Marquis of Huntly, at which time the chieftain’s banner will be raised. 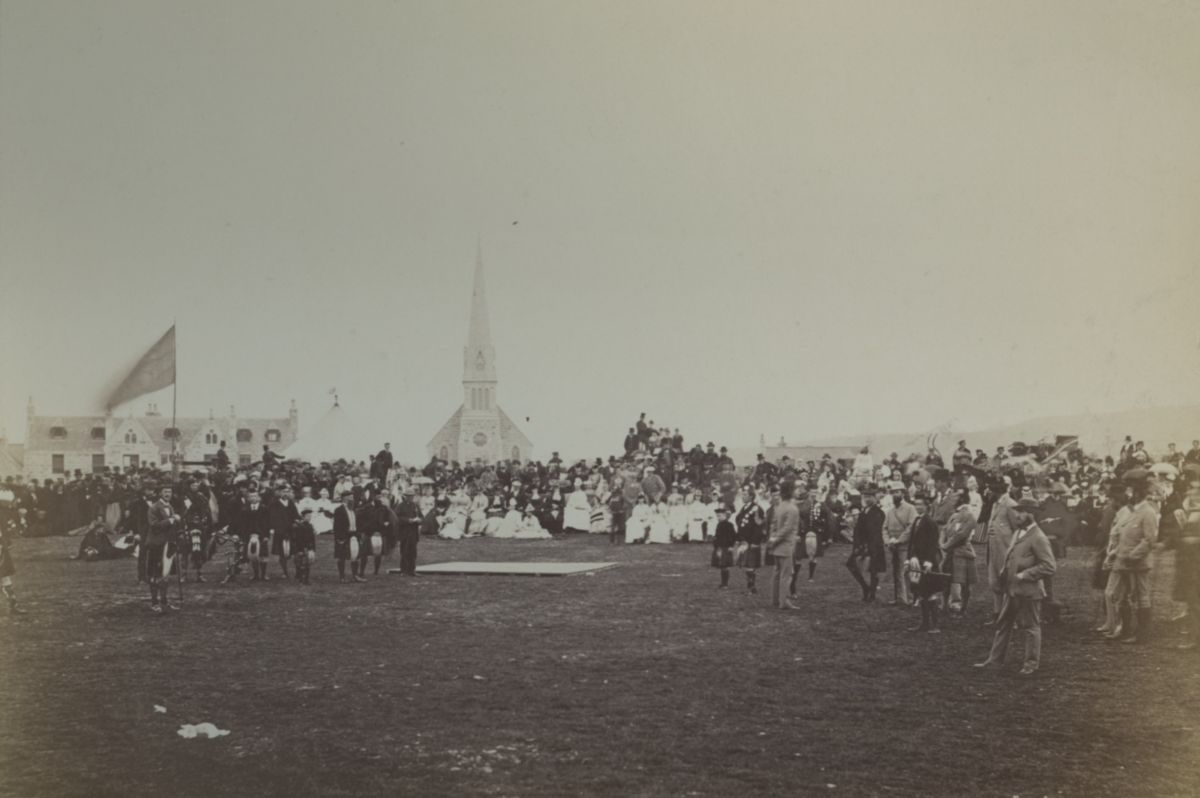 Aboyne Highland Games 1871: One of the earliest pictures of the event.

A number of competitions will be watched with keen interest throughout the day by the assembled crowd.

Four events that have been a fixture of every games have this year been classed as Gold Events.

Boasting increased prize money and newly commissioned trophies that have been designed by local teenager Angus Fraser, each event is expected to be fiercely contested.

The open caber toss will see the usual feats of strength and balance from the heavy athletes.

However, with the winner gaining the opportunity to toss the new 23ft 6in (7.15m) long anniversary caber, a close competition is predicted. A field of up to 150 runners are expected to take on the challenging 6.8-mile hill race, which last year was won by Kyle Greig in 42 minutes 58 seconds.

One of the events that made up the programme of the inaugural games is also making a spectacular return after a near 40-year absence. Pole vaulting, once a staple of highland games across Scotland and now only staged at a handful of games, will grace Aboyne Green for the first time since 1978.

“Aboyne Highland Games has been an important part of the local community for 150 years, attracting visitors from around the world and occasionally, British and European royalty. Saturday is an opportunity for us to pay homage to our history, celebrate the achievements of today’s competitors and look ahead to the future. It is set to be a special day, which we are marking in a number of ways.

“Seeing Aboyne Green come to life on games day is a fantastic sight. It is the beating heart of the town with plenty going on to entertain all the family. Alongside the usual mix of events, there will be 10 pipe bands performing, a new caber event, the presentation of four stunning new trophies and pole vaulting. The crowd is certainly going to be very well entertained as Aboyne Highland Games celebrates its 150th birthday, and we’d encourage them to be here in time for the opening ceremony at 11:15am.

“Highland games such as ours would not be possible without the hard work that so many volunteers put in throughout the year and the support that we receive from numerous local businesses. We are indebted to them for that continued assistance.”

Aboyne Highland Games takes place on Saturday, 05 August on Aboyne Green, with events getting underway just after 10am. The official opening ceremony commences at 11:15am and events run throughout the afternoon. Those planning to attend Saturday’s event are encouraged to be there in time for the opening ceremony.

Featuring a programme of traditional highland games events, including highland dancing, tossing the caber, piping and fiddle competitions, the event on the town’s green attracts visitors from around the world and makes an important contribution to the local Deeside economy. Further information on Aboyne Highland Games can be found at www.aboynegames.com.