For decades, a mysterious figure from the past has looked out from the minutes of the inaugural meeting of Aboyne Highland Games. Now, a century and a half on from that meeting, today’s committee has finally been able to put a name to the person who in 1867 held the title of Lord Provost of Aboyne.

As part of celebrations to mark the 150th anniversary of Aboyne Highland Games, the committee embarked on a project to identify the event’s founding fathers.

In July 1867, 20 men met in Aboyne’s Huntly Arms Hotel to discuss the possibility of staging the Royal Deeside town’s first highland games. Within weeks their vision was a reality as several thousand spectators gathered to watch proceedings on Aboyne Green.

Next month, on Saturday, 05 August, a century and a half on, those scenes will be recreated on the town’s green as crowds watch today’s competitors vie for honours in light and heavy athletics, highland dancing, piping and fiddling. The event’s success and appeal ensures it continues to be a highlight of the Royal Deeside summer events calendar.

Thanks to the work of Aberdeen and North-East Scotland Family History Society, a picture of each of these pioneering men has now been created. The professions of the men forming that first committee included a doctor, an innkeeper, a leather merchant, a flesher (butcher), a carpenter, a blacksmith, a wood merchant, a shoemaker, a gamekeeper, a railway porter, two masons and at least five farmers.

The most intriguing entry in the list of attendees was simply given as the Lord Provost of Aboyne, who was noted to have chaired the meeting. The title was most likely ceremonial as Aboyne was not a royal burgh, only a burgh of barony. For this reason, no official council records of Aboyne Town Council are held as part of Aberdeen City and Aberdeenshire Archives.

A newspaper article was to prove crucial in unmasking this eminent figure. The Aberdeen Journal of May, 22 1867 carried a story in which the identity of the Lord Provost of Aboyne was confirmed as a Mr William Mackintosh. This matched the name that was signed at the end of the minute of the first meeting and not listed elsewhere in those minutes. 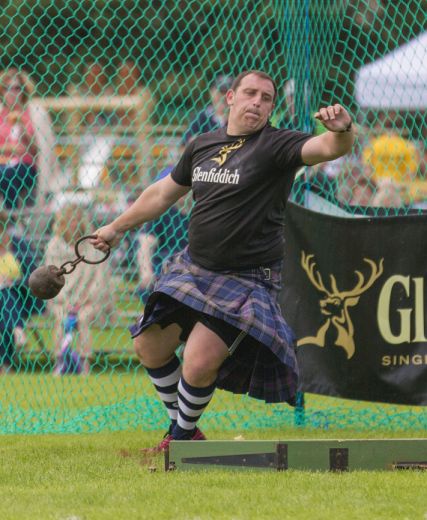 Born in early 1830 in the Inverness-shire parish of Daviot and Dunlichity, William Mackintosh was working as an officer of the Inland Revenue in Aboyne at the time of the 1861 census. Following the death of his first wife in 1862, he married Mary Symon in 1864 with whom he had six children. He worked as a general merchant in Aboyne for a number of years before moving to Aberdeen to work as an insurance agent, dying in the city in May 1898.

The proprietor of the town’s Huntly Arms Inn, Charles Cook, local farmers James Esson of Dess, William Grant of Mill of Coull and David Cooper from Glen Tanar, and blacksmith Alexander Gray were also among the group who helped to establish the games.

A fixture of Aboyne Highland Games, where the contribution different families have made to the local area is celebrated, is the clan village, which each year features 10 Scottish clans. This year the clans that will be represented are Burnett, Cochran, Findlay, Forbes, Fraser, Gordon, Hay, Leask, Leslie and Strachan. Aberdeen and North-East Scotland Family History Society will also be on hand to provide advice and assistance to those looking to research their own family history.

The Burnett clan will have one of the largest presences in the clan village at Aboyne Highland Games. Around 200 clan members are travelling to the north-east from around the world as part of a week-long programme of events that forms the clan’s regular gathering.

Those visitors will be among the 10,000 spectators who annually attend Aboyne Highland Games, making it one of north-east Scotland’s most popular traditional summer events. Locals and visitors will be able to toast the event’s success with a commemorative whisky – a 14-year-old Longmorn bourbon cask. Each of the 292 bottles has its own individually numbered certificate.

“The Lord Provost of Aboyne has intrigued us for many years and it is great to finally learn a little more about this mysterious figure, and also the other gents who helped establish the games. We are very grateful to Aberdeen and North-East Scotland Family History Society for their assistance.

“The group has done a fantastic job researching some of the family history of the founding committee, identifying where they lived, their occupations and naming their direct descendants. When you look at their professions, these men had important roles to play in the local community and would have been held in high regard.

“Our 150th anniversary is set to be a special day and is being marked in a number of ways. A book containing old pictures and the public’s memories of the games is being created, an anniversary whisky is being bottled and pole vaulting is making a return to programme. It will be great to once again see Aboyne Green come to life on games day and we look forward to welcoming visitors from far and wide to help us celebrate our anniversary.”

Bottles of the 150th Aboyne Highland Games anniversary whisky, which retail at £49.95, can be purchased from the Aboyne branch of Strachan’s of Royal Deeside.

Founded in 1867, Aboyne Highland Games is a traditional Scottish highland games held annually on the first Saturday in August.

The Aberdeenshire event, held under the patronage of Granville Gordon, the 13th Marquis of Huntly, attracts crowds of up to 10,000 people each year. Featuring a programme of traditional highland games events, including highland dancing, tossing the caber and piping, the event on the town’s green attracts visitors from around the world and makes an important contribution to the local Deeside economy.

Further information on Aboyne Highland Games can be found at www.aboynegames.com.

One Response to “Light Shed On Aboyne Games Mystery”