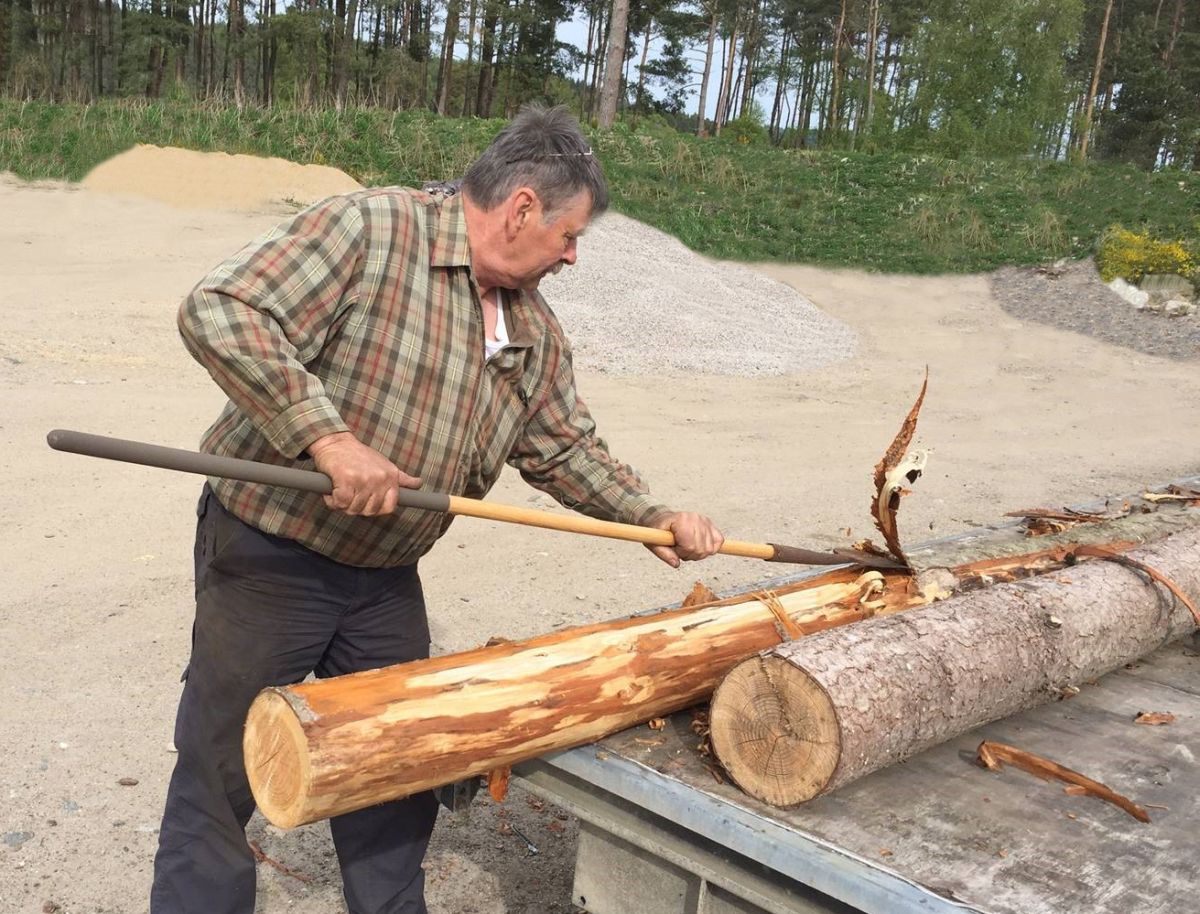 Athletes competing in the heavy events at this summer’s Aboyne Highland Games will have a new challenge on their hands as organisers have unveiled a new caber to mark the event’s 150th anniversary.

One of the most iconic disciplines in the highland games programme, tossing the caber requires competitors to possess strength and good balance.

Measuring 23ft 6in (7.15m) in length and weighing approximately 130lbs (59kg), the new anniversary caber is set to test these skills when it is attempted to be thrown end over end into the perfect 12 o’clock position at this year’s games on Saturday, 05 August.

Founded in 1867, Aboyne Highland Games has become one of north-east Scotland’s most popular traditional summer events, attracting up to 10,000 visitors each year. Held on the town’s green, the games is a highlight of the Royal Deeside summer events calendar.

Overseas visitors to highland games watch in awe as competitors toss the caber – many are amazed by the ability of heavy athletes to run with and throw such a lengthy and weighty object. The caber is often described by foreign tourists as a tree trunk – its most natural form – and fail to realise the work involved in creating this carefully crafted piece of sporting equipment.

Organisers of Aboyne Highland Games decided to commission a new caber as the discipline was one that had been a fixture of the games’ programme since the event’s inception 150 years ago.

At the inaugural games, local athlete Donald Dinnie, who would go on to become one of the world’s most revered athletes, outclassed competitors in most disciplines, including tossing the caber. It was reported in the Aberdeen Journal of Wednesday, 04 September 1867 that: “In tossing the caber again, Dinnie was far superior to any of the others, and tossed clean over twice an enormous tree, which none of the others could turn until fully three feet were cut off the thick end.”

Timber for the commemorative caber was donated by Dinnet Estates and came from a 50-year-old Douglas Fir that stood in woodland at Rhu-na-Haven Road, Aboyne. Since the 70ft tree was felled in January, the timber has undergone a number of processes that have seen it transformed from tree trunk to slender caber.

The work is being carried out by Murray Brown, who is convenor of heavy events at Aboyne Highland Games. Murray, who himself competed in the heavy events at highland games during the 1970s and 80s, has made a number of cabers in recent years. Over the past five months Murray and a team of volunteers have spent around 50 hours creating the new Aboyne caber, which will be unveiled at the games. 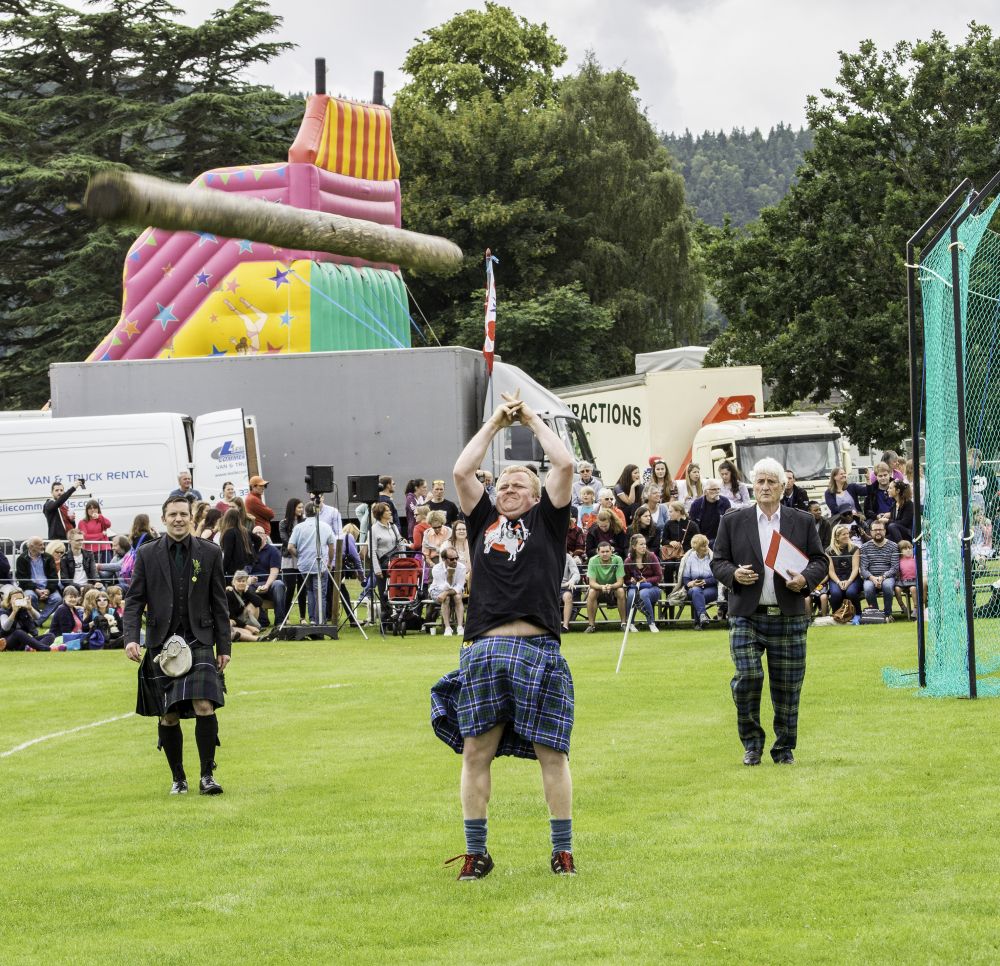 The first stage of the process was to allow the sap within the wood to dry out, before the log was peeled of its bark and sculpted and sanded into the iconic gently tapering pole. A number of coats of oil have also been applied to the caber to preserve its finish. One end of the caber has a smaller circumference, allowing competitors to safely hold it with ease.

The 150th anniversary caber will be used in a special event that will be contested the winner of the open caber throwing competition on games day.

If they are deemed to have successfully tossed the anniversary caber into the perfect 12 o’clock position they will be rewarded with a £500 prize.

“Many foreign visitors are unaware of the work that is involved in creating a caber. Some think we merely cut down a tree, strip the trunk of its bark and put it to use on the games field. However, it would still be full of sap which would make it too heavy and its girth at both ends too broad to be held by the majority of competitors.

“The new anniversary caber is a beautiful piece of timber. The wood is very straight and has few blemishes, which has made working with it over the last few months much easier. I look forward to seeing competitors throwing it on games day.”

Aboyne Highland Games has a tradition of creating cabers that challenge the strength and skill of competitors. In 1961, the games sent new cabers to Australia following a request from the Highland Society of New South Wales. However, it proved too tough a challenge for Australian heavy athletes. It was reported in the Canberra Times of October, 21 1965 that “nobody could toss it” and that it was subsequently replaced.

Marcus Humphrey, whose family owns Dinnet Estate, was inspired to donate wood for the anniversary caber after recalling that he was at the quayside in 1961 when the cabers arrived down under.

“I got the idea when I remembered that Aboyne gave two cabers to the Highland Society of New South Wales in 1961. The society was keen to obtain a caber from a Scottish forest for use at its own games and Aboyne duly obliged. By chance I was in Sydney and witnessed the cabers being unloaded from a ship at the harbour.”

“Our 150th anniversary is set to be a special day and is being marked in a number of ways. A book containing old pictures and the public’s memories of the games is being created, an anniversary whisky is being bottled and pole vaulting is making a return to programme.

“The new caber will be a splendid and lasting addition to our games equipment. Our thanks go to Murray, Marcus and all of those who have been involved in crafting it.”

Featuring a programme of traditional highland games events, including highland dancing, tossing the caber and piping, the event on the town’s green attracts visitors from around the world and makes an important contribution to the local Deeside economy. Further information on Aboyne Highland Games can be found at www.aboynegames.com.