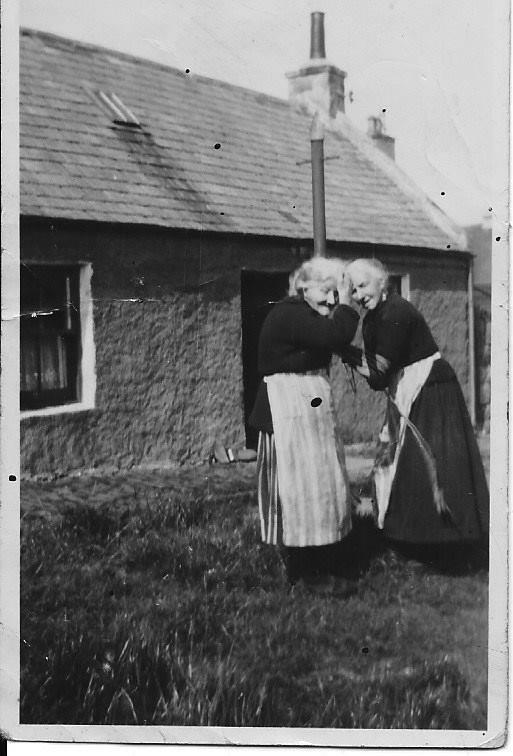 Isabella Catto Caie was well known in Cove and well known in Aberdeen. In the days when catches were bountiful, she could be seen hawking her wares at The Green. Later, as landings of fish at Cove declined, she took to buying from middlemen at the Market in Aberdeen before taking up her usual stance on the cobbles.

She had her regulars and, in the early days at least, could be easily spotted walking the six miles into Aberdeen, carrying a creel loaded with fish on her back to sell. Latterly, in old age, she took the bus to town.

According to legend, it might take two men to lift the heavy creel laden with fish on to her back before she set out on her journey into the city centre.

Latterly, folklore led to some late-fame and alongside a few pictures in the press she featured, at least the once, in a Press and Journal Calendar celebrating the heritage of the North-east.

Today, on a wind swept winters day, we had come to find her grave.

We parked just outside the church at Nigg and, as horizontal rain arrived to welcome us, threw on jackets and set off on foot around the graveyard. We fully expected a fruitless hunt; we had after all just trudged round St Fittick’s kirkyard following a misdirection. But, by now, Albertino was firmly in search-mode and nothing, not even a freezing February storm, was going to get in his way.

Within minutes a cry of “It’s over here Duncan” rang out and I made off in the direction of the shout.

There, arm outstretched and touching the gravestone of Isie Caie was a slightly distraught Albertino.

“I feel very emotional now that we are here, I feel a connection.”

Brazilian Sculptor Albertino Costa had of course already established a connection with the lady known locally as Isie Caie. 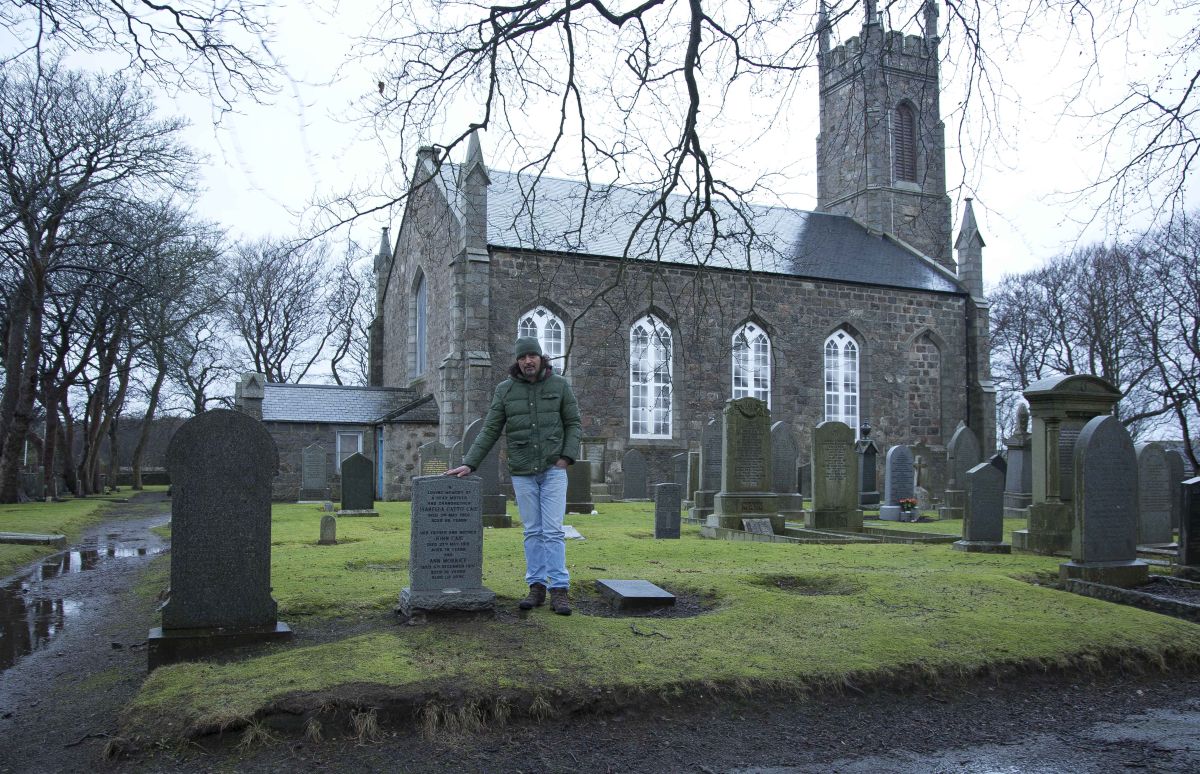 Having lived and worked in Aberdeen for over 20 years, he had been commissioned by community group Cove in Bloom to design and create a sculpture commemorating ‘the spirit of the fishwife’.

Rather than simply create a romanticised studio based life sculpture of Cove’s most famous fishwife, Albertino’s approach was much more radical – he would work in public in the open air alongside the very harbour where the fishwife’s journey began.

Permission to site the project on the harbour-front was readily granted by land-owner Pralhad Kolhe and in summer 2016 work began on the quayside where a large block of white Italian marble began to slowly morph into a vibrant piece of community led sculpture.

From the very beginning visitors to Cove Harbour took an interest.

“the work is open for everyone to come and contribute and with no pre-conceived idea of the final form, it is easy to get people involved.”

From the very start says Albertino:

“creating the work live at Cove Bay gave the people a sense of ownership and a sense of deep connection both with each other and of course with the past.”

“We had heard about Albertino’s previous work and although when we started speaking to him we hadn’t got a rigid idea of what we wanted; we knew however that he was the artist we wanted and we immediately started the ongoing process of fundraising the £20,000 needed to finance the project.”

As the work progressed, the conversations with spectators gave Albertino a breadth of knowledge which he has embodied in the various elements of the sculpture. 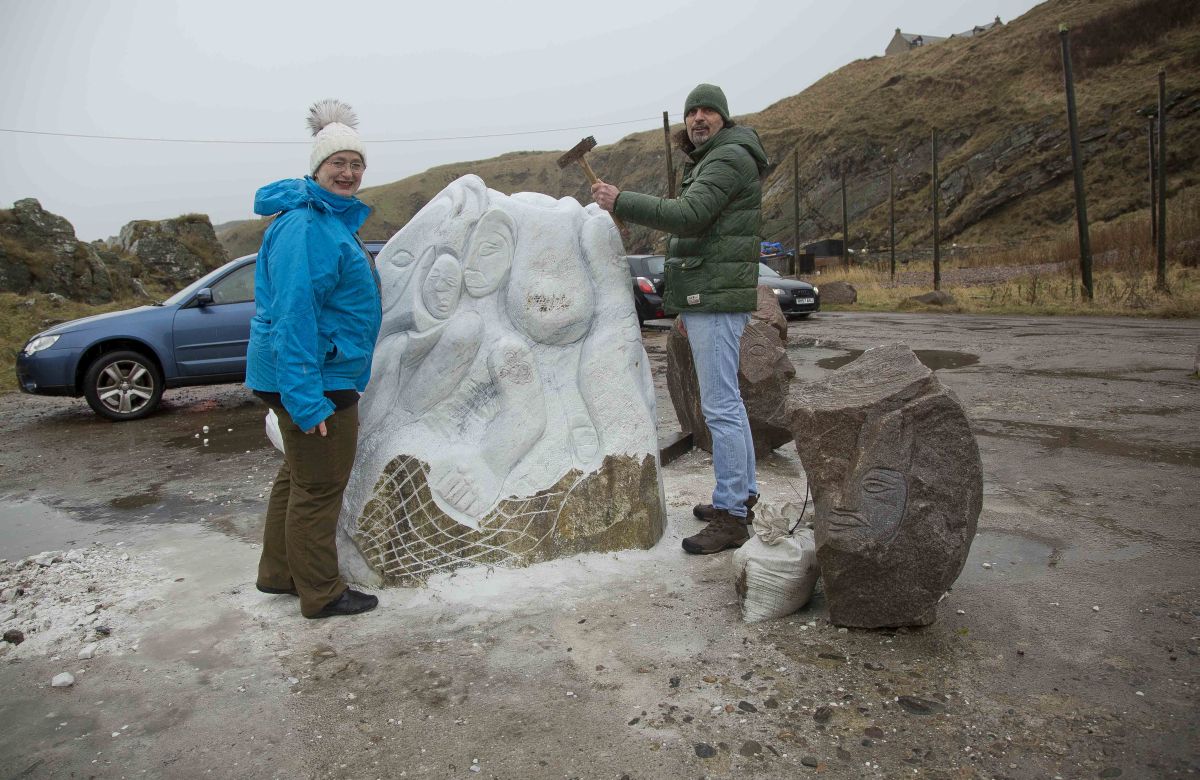 The creel, the net, the wild sea and the harvest of the sea are vividly portrayed along with, of course, the spirit of Isie herself.

Her grand-daughter, Chirsty MacSween records that “she sold at the Green to the end” and that she “had a reputation for always having a smile on her face, a happy woman.”

The Cove sculpture remains a work- in-progress and there is still time to make a hands-on contribution to the final form of ‘The Spirit of the Fishwife.”