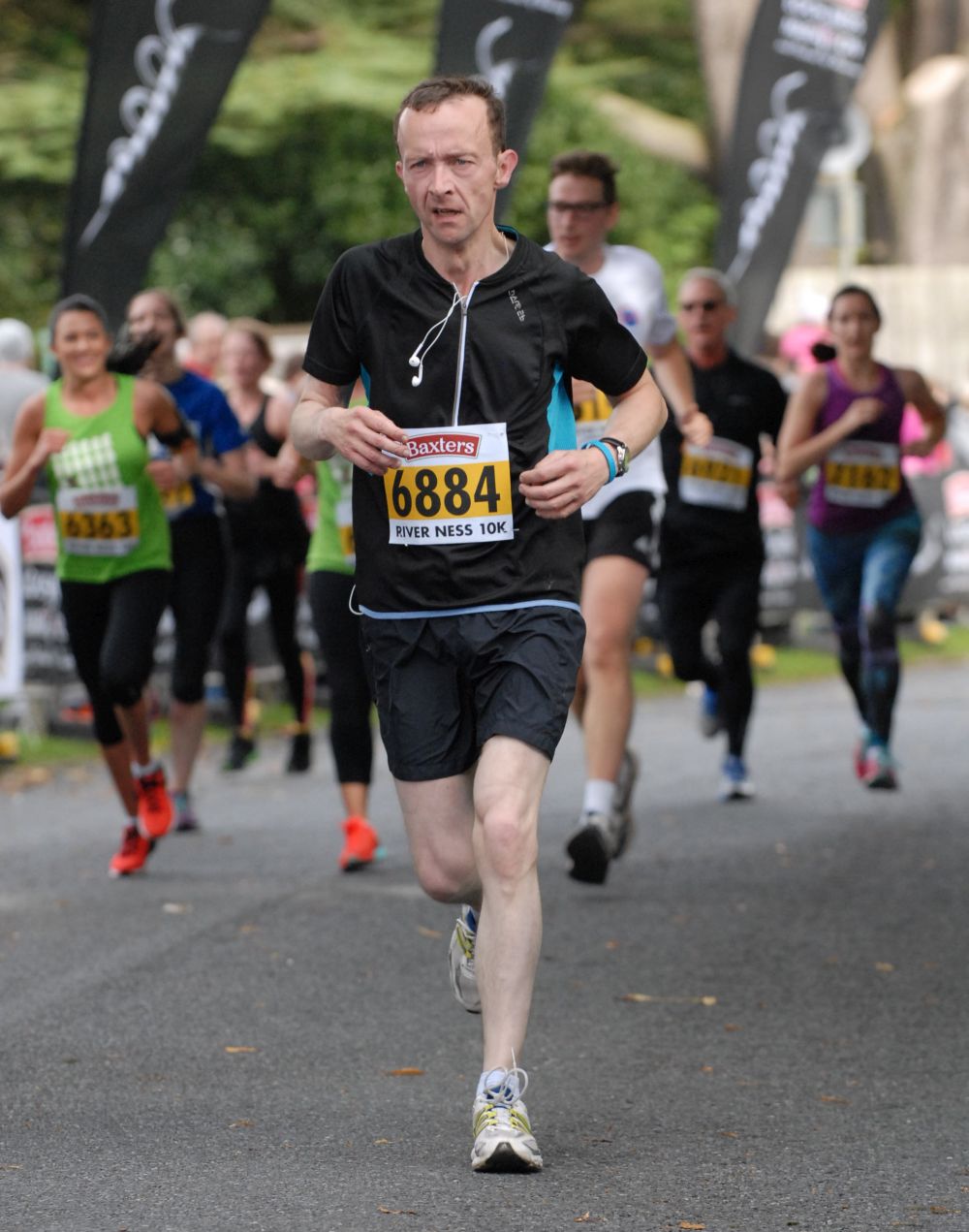 After battling with necrotizing fasciitis, Robin Grant ran in the Ness 10K in 2016 and will return in 2017.

An Aberdeenshire man who suffered from a rare flesh-eating bacteria has recovered to discover a passion for running.

After battling with necrotizing fasciitis, Robin Grant has developed a love of exploring the great outdoors on foot and will compete in the Baxters River Ness 10k in September.

It was an ordinary day at work in August 2014 for Robin (43) – originally from Old Rayne in Aberdeenshire and now living in Inverness – when he began to notice the first symptoms of the illness.

“I suddenly felt an intense pain in my arm. It felt like I had overstretched and trapped a nerve in my shoulder – only multiplied by a hundred. But after about half an hour, the pain went away and I thought I was okay.”

For Robin, a visit to the doctor is usually out of the question – but as the pain returned and the severity increased – he had little option.

“The pain came back and it was excruciating. Although I don’t usually visit the doctor – I wasn’t even registered at the GP – I walked up to casualty and was given some painkillers.

“The next day I visited the GP who gave me some more painkillers. I had to register, but I could barely lift my arm due to the pain and they had to fill in all the forms for me.

“As the week went on I got progressively worse, to the point where I couldn’t get to the end of the road without feeling violently sick.”

Struggling on his own, Robin’s father took him to the family home in Aberdeenshire to offer some support. But over the weekend, Robin’s condition deteriorated.

“I was getting worse and worse, so my dad took me to see his GP in Insch. He took one look at me and asked, ‘Have you got transport or do you need me to call an ambulance?’”

Robin was rushed to A&E in Aberdeen where, after just four hours, he was taken into surgery. He was diagnosed with necrotizing fasciitis – a rare condition that is known as a flesh-eating bacteria. The illness causes tissue death in affected areas, resulting in incredible pain.

“When I came out of surgery, I was in intensive care for about two weeks and on a ventilator for a week. The only way to treat the bug is to cut it out – the flesh is essentially dead – so I also required plastic surgery.”

Frustrated by the constraints of his hospital bed, Robin’s thoughts turned to an old hobby – running. He says, “For me, hospital was an incredibly boring place. I signed up to take part in a local 10k event while I was still admitted, and completed it the next year.”

Six months after his ordeal in hospital, Robin was back in Inverness and back at work as driver supervisor at Arnold Clark Car and Van Rental. But he couldn’t shake his passion for running – despite having to adapt to new limitations. Robin explains,

“I had to develop a different style of running. My right side was hit hard by the bug – I lost my shoulder muscles and part of my bicep – so it really affected my balance. I couldn’t swing my right arm, and I still can’t lift it properly to this day.

“I noticed that I had begun to compensate with the left side of my body, but I actually feel like I’m running better now than I ever did before. It might be because I’m running more now, but I think that I’m also improving because I’m thinking more about how I need to run.”

After his first race, Robin began to enter a number of 10ks across the country – including the River Ness 10k, part of the Baxters Loch Ness Marathon and Festival of Running. And despite having run in some incredible locations across the country, Robin counts his local race as one of the best.

“I was back living in Inverness and decided to run the River Ness 10K. It was tough – it was roasting hot that day – but I absolutely loved it. The course is great, and the energy around the whole event is really uplifting.

“This year I’m looking to up my distance and run a few half marathons. I’d run a few before I was ill, but this will be the first time I’ve attempted it recently. And I’ll definitely be back to run in the River Ness 10K. The year wouldn’t feel complete without it.

“I’ve got my sights set on the Baxters Loch Ness Marathon, though. One day soon, you’ll find me on the starting line.”

The River Ness 10k takes place on September 24, and is part of the Baxters Loch Ness Marathon and Festival of Running. The event, which draws thousands of people from across the world, also comprises the title marathon, 10K Corporate Challenge, River Ness 5K and a Wee Nessie fun-run for pre-school children.

The finish line is based around the Event Village at the Bught Park in Inverness, where runners and spectators can enjoy the Baxters Food and Drink Fayre, a Sports Expo, live music and activities for children.