On March 12th, in California, a Trump Golf course was vandalised by protesters. By contrast, in this very British protest, the important issues were discussed over a cup of tea! 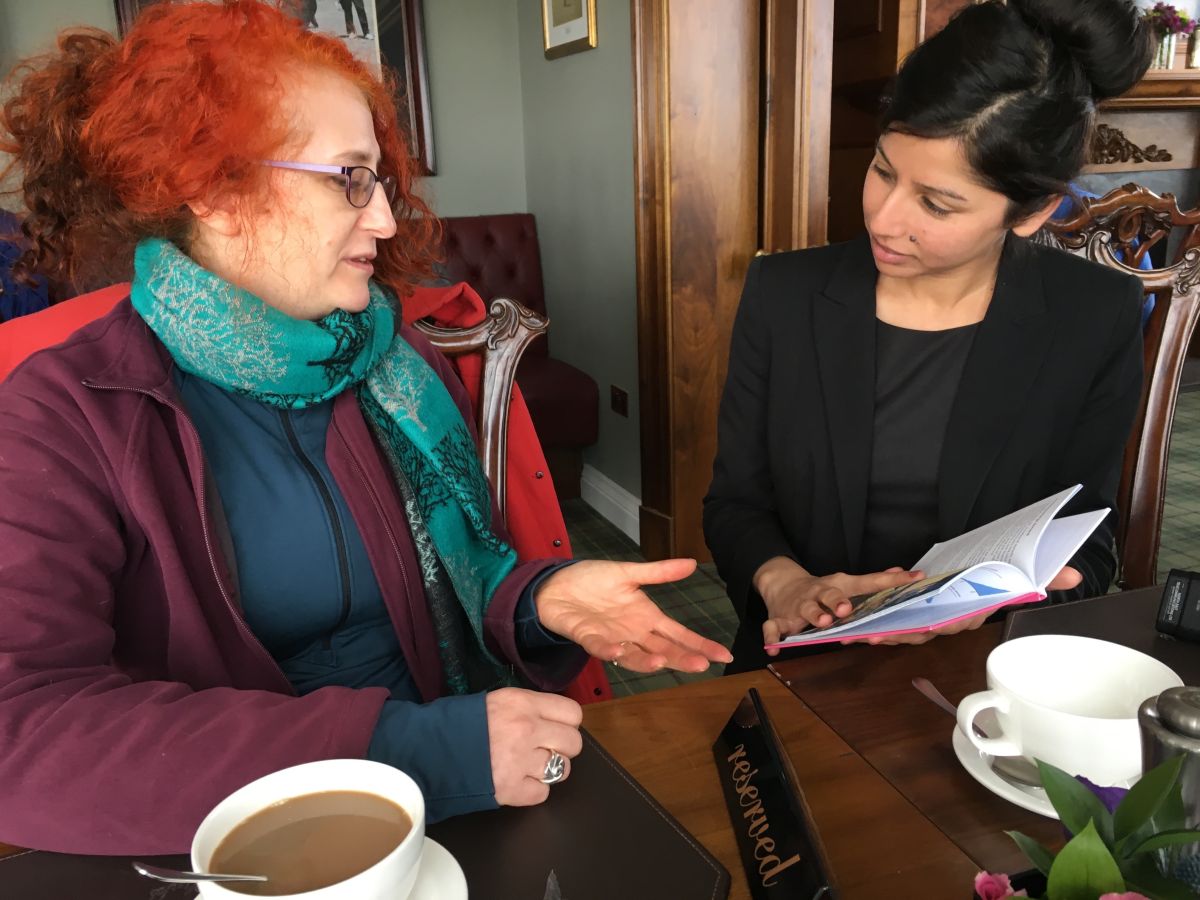 On Saturday 18th March, climate scientists travelled to Trump International Golf Links, Scotland (TIGLS) to present a copy of The Ladybird Expert Guide to Climate Change, authored by HRH The Prince of Wales, and a statement on the importance of science and evidence in climate change policy making issued earlier this week by the Royal Meteorological Society.

The climate scientists wanted to highlight concerns that recent rhetoric and decisions from the Trump administration are contrary to the overwhelming evidence base on climate change and how it needs to be addressed.

Unexpectedly, they were offered the opportunity to discuss their concerns over a cup of tea!

The Head of Hospitality and Guest Services for TIGLS, Ms Yashinee Aulum, was pleased to receive the presentation. TIGLS is a business greatly affected by day-to-day weather, and one potentially at risk from future climate change.

The visit to TIGLS followed a public science meeting at the University of Aberdeen entitled ‘Science and climate change in an alternative facts world’ which was held as part of British Science Week. The meeting was chaired by Prof Jo Smith (University of Aberdeen), and talks were given by:

Before the meeting, Prof Pete Smith, University of Aberdeen, who has served as Convening Lead Author for the United Nations Intergovernmental Panel on Climate Change said:

“Climate change, and the way to deal with it, has been accepted by 196 countries at the Paris Climate Agreement, but Mr Trump has appointed a climate denier as the head of the US Environmental Protection Agency, and has previously pledged to withdraw from the Paris Agreement. The fact is, we need the US to cut its greenhouse gas emissions in order to meet the ambitious targets set out in the agreement.

“We all share the same atmosphere, so misguided actions in the US will not only affect Americans, it will affect everyone on the planet. We cannot allow decisions based upon ideology to replace those based on scientific evidence – and that is why we are holding this meeting today, during British Science Week – to urge Mr Trump’s administration to take the advice of its own climate scientists, and stick to US commitments under the Paris Agreement.

“The US will benefit from this. Failing to act when you don’t have the evidence is in some cases understandable – but failing to act when you are in full possession of the facts, which amounts to wilful ignorance, is inexcusable, and will cause great damage to the world we leave for our children and grand-children.”

“The US is a democracy that I am not part of so they are entitled to pass what ever crazy laws they want. If they want to burn more coal it upsets me but it is ultimately not my call.  However, I worry when their policies threaten science.

“The US administration are really contradicting themselves, saying there is not enough evidence that carbon dioxide causes global warming, then promptly threatening to cut agencies that collect the evidence. Scientists around the world depend on NASA and NOAA satellites and on the efforts of many US colleagues. More than ever we should be basing decisions on evidence rather than ideologies, and I hope the US administration wakes up and realises this.”

“The lives of people in low income countries are already challenged by extreme weather events; climate change will make this worse. We can’t gamble with their lives. Climate change will mean more droughts and floods, and more people will die. The science is clear, so climate policies must be based on this evidence.”

“This year, the United Nations predicts the worst humanitarian crisis since World War II with several East African Countries being severely affected by drought. The lack of rain has contributed to massive livestock deaths, food and water shortages, acute malnutrition and widespread famine.

“Future climate change is expected to increase the magnitude and frequency of extreme climate events, such as droughts or floods and it is the poorest people in society that are most vulnerable to its negative effects.

“Climate change is a serious risk to poverty reduction and we, as scientists, feel a moral imperative to urge our political leaders act now – inaction or delay is inexcusable.”

“The Trump administration is choosing to ignore or deny the overwhelming scientific consensus on dangers of climate change to people’s health and well-being already, as well as in the future, and the urgency of putting in place long-term plans.

“We are affected in the UK by America’s emissions, but I have no voice there. Sadly similar denial or lack of action is taking place in our own country from a small number of newspapers, businesses and politicians.  UK governments since Margaret Thatcher have been at the forefront of climate action, as they, like the 196 governments who just signed the Paris Agreement, listened to the evidence and understood its importance.

“Climate change has recently slipped down the agenda of the Government. Many countries, states, and businesses have managed to slow or reduce their emissions while still increasing profitability. I am taking part in this meeting to stand up for evidence and for action, not just in America, but here at home.”

“Mr Trump is an environmental disaster. We knew that from his actions in Aberdeenshire over the last ten years, but now he can take decisions with global consequences. Mr Trump’s denial of climate change science will make progress with tackling the biggest threat facing the world immensely more difficult.”