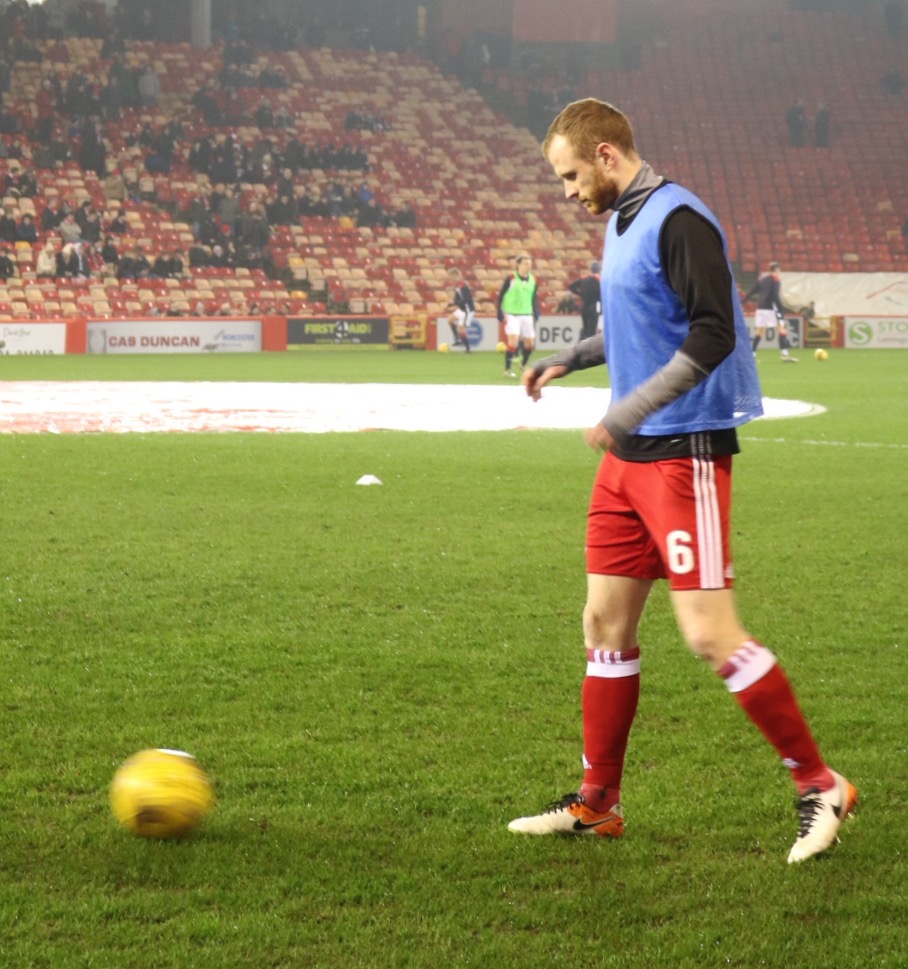 It was a return to league business today, and a relatively short trip north for the visitors tonight.
These Friday evening games have proven popular, and for a change, the powers that reschedule these games have been sensible in having Dundee the opposition, rather than Motherwell, Hamilton or some other further away club; making it easy for travelling fans is not normally in the remit of the television companies.

The strong Dons’ team were looking to win 5 on the bounce on this gine but cold evening.

Approximately 11,000 fans saw Graeme Shinnie get the first strong tackle of the game a mere three minutes into the game.

A minute later good linking play involving Andrew Considine and Niall McGinn with the final ball just your far ahead of Jonny Hayes.

Dundee counter attacked and a good ball into Aberdeen goal mouth, for the first shot on target for the visitors, was safely held by Joe Lewis, the ever-present in the Aberdeen goal.

The Dons were taking some time to settle, with Dundee harassing them and, at this point, their number 33, Craig Wighton, looking sharp. They won a free kick around 4 yards out from the edge of the Aberdeen box, but it came to naught. Then in the 10th minute captain Paul McGowan chipped a ball off the crossbar.

A couple of minutes later the home team were awarded their first free kick of the game by referee Kevin Clancy, when Hayes was bundle off the ball.

Aberdeen had their first real chance on the quarter of an hour mark, when McGinn placed a corner kick perfectly into the goal area, but Mark Reynolds, up from defence, headed it just wide.

Another corner kick was far too long for anybody to get on the end of. Their next corner was won when a McGinn shot was turned over the by-line.

Dundee then broke upfield and on the 21st minute had a goal chalked off for offside. The Dons by this time had started to dominate the game and a long pass from Ash Taylor which defender Julen Extabeguren got his head to, fell to McGinn who’s chip shot went just over.

Keeping the pressure up, a free kick was awarded when Adam Rooney was fouled, and the effort, again from McGinn, was tipped over by ex Don Scott Bain.

The breakthrough came around the 29th minute, whith good  work  by Hayes and McGinn, with the   latter putting in a superb ball to find Captain Ryan Jack rising through middle of the defending pack, to header home.

Before you could draw breath, another cross in from McGinn was cut out by in form Bain as Shay Logan was running in.  Logan was then the perpetrator of the next move, when he executed a superb cross from the right wing, which was defended well by Extabeguren.

Taylor and Rooney were the next Dons to have an exchange of play, setting up Kenny McLean, who seems to relish slightly forward p,aging position. His close angle effort was saved though.

With only 6 minutes left of the first half, Dundee got their first corner.

The ever-determined Shinnie then slipped a great pass to McGinn, but the only reward for the move was another corner.

The referee then deemed Hayes had fouled a Dundee player after the Aberdeen man had ran 25 yards to knock the ball off the feet of the man. A ridiculous decision if ever there was one.

Aberdeen were searching for the second goal, and chip from Taylor from 30 yards out was deflected of off Kosta Gadzhalov and into the Dundee stopper’s arms.

The potential goal of the month came next. Just on half time, a ball into the Dundee box was met by the rejuvenated Taylor, who rose above the defenders and headed the ball back to the oncoming McGinn who majestically volleyed into the net to rapturous salutations from fans and team mates alike.

Both teams started the second half without making any changes and Aberdeen kicked off towards the home end.

The referee seemed intent in making some baffling decision; this time penalising Shinnie as he stopped the ball just before it reached the feet of an opposition player.

Nine minutes into this half, a free kick taken by McGinn from around 40 yards out, went straight across the front of the goal with no takers.

With 58 minutes elapsed, McLean picked up the ball up and ran swiftly in towards the goal, but his shot was turned round for a corner. McGinn, on top form was tackled as he made yet another goalward run.

At this point Dundee, despite being a much poorer quality team than the hosts, were still trying to create something instead of just playing spoiling football. But the quality isn’t there, especially after losing their top two goal scorers during the summer. Manager, ex-Dons Captain Paul Hartley, was possibly staging a protest against the board by only naming 5 subs to sit on the bench.

After the first booking for Dundee, for a foul on McGinn, his free kick was headed just wide by Rooney.

There then followed a period of scrappy play by both sides, brightened only by Hayes making a fabulous, pacy run into the area, only to have his close range shot saved by the in form Bain.

Shinnie found his way into the referee’s book for persistent fouling with just over 15 minutes left to play.

Dundee were the first team to make a substitution when Faissal el Bakhtaoui replaced Extagabeguren. This substitute for the visitors, changed their style of play, as they swamped the midfield making it harder for Aberdeen to break them down. You got the impression Hartley was now just trying to keep the score somewhat respectable.

With 10 minutes left, the crowd were baying for a free kick as Hayes tumbled to the ground, but, for a change, I believe the man in the middle made the correct decision. It looked like shoulder to shoulder to my eyes.

A minute later, the same man picked up the ball on the left, and fired in great ball. The head of McGinn made perfect contact with it and steered in into the back of the net for his second goal of the night, and his team’s third.

That’s 4 goals in two games for the Northern Irish International player. If he keeps this form up, and he refuses to sign a new contract, he should be a rather fine, free investment for some club south of the border.

Aberdeen then made their first change of the evening, with Hayes departing the field, and Ryan Christie coming on to a generally warm welcome.

The final 10 minutes saw Rooney, who wasn’t on his sharpest form tonight, being taken off and Miles Storey coming on. Then, two goal hero McGinn was replaced by Scott Wright.

The changes didn’t alter anything, and the latter pair didn’t really have enough time or opportunity to create anything, although Storey looked lively.

After the 3 minutes of allocated stoppage time had passed, the referee blew the final whistle, and another satisfactory victory for Aberdeen was gained to move them, at least until tomorrow mid afternoon, back into second place.

Aberdeen now face a tough away match against runaway league leaders Celtic on Wednesday before returning to Pittodrie next Saturday afternoon when Partick Thistle will be the visitors.