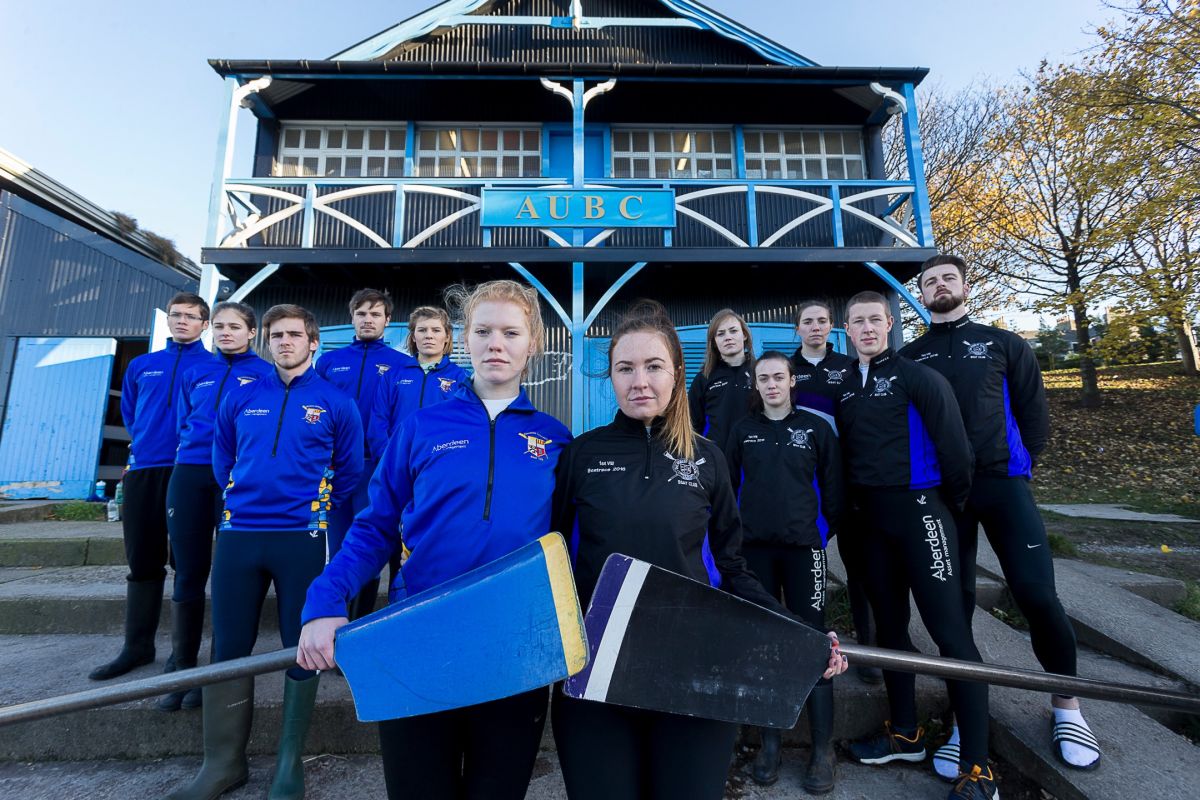 Erin Wyness (RGUBC) and Fiona Bell (AUBC) hope to lead their teams to victory in the 2017 Aberdeen Boat Race.

Old rivalries will be reignited this March as Aberdeen’s two universities take to the River Dee in a fierce battle of nerves and determination.

The University of Aberdeen has challenged five-time reigning champions Robert Gordon University (RGU) to a rematch following 2016’s exhilarating race in which both crews smashed the course record.

Following a close race in which the mixed crews gave it their all over the 3.5km course, RGU emerged triumphant by just a quarter of a length in an impressive seven minutes and 38.6 seconds.

Ahead of the main race, the day’s programme will also include second crew, alumni and media team races. Students, alumni and members of the public are invited down onto the banks of the Dee to cheer on the crews.

Erin Wyness (20), president of RGU Boat Club, believes that her crew has what it takes to bring home the trophy for the sixth year in a row. The Events Management student from Aberdeen says:

“Of all the races we compete in throughout the year, the Aberdeen Boat Race is by far the highlight for the clubs in Aberdeen. The University of Aberdeen squad is looking strong, but we’ve been training hard in order to lift the trophy again. Bring on March 4th.”

Aberdeen University Boat Club president Fiona Bell (21), however, is confident that this will be the year that the historic institution will break RGU’s winning streak. Sport and Exercise Science student Fiona, who hails from Kilmacolm near Glasgow, says:

“We’ve been out on the water in all weathers – in daylight and darkness – to make sure we’re ready to take on RGU and the crew is in good shape. After RGU winning for five years straight, defeat is not an option – it’s time for us to reclaim the title.”

The annual boat race – hailed as Scotland’s equivalent of the Oxford-Cambridge boat race – stretches from the Bridge of Dee to the Aberdeen Boat Club, offering many great vantage points for spectators along the course. Each team of eight, and their coxes, have already begun an intensive training regime to reach peak physical fitness for the race.

Professor Sir Ian Diamond, principal and vice-chancellor of the University of Aberdeen, says:

“The dedication and hard work of the Aberdeen Boat Race crews is an inspiration to all of us. The rowers from both universities put everything they have into the race and it is a fantastic occasion. The result of last year’s race was incredibly close, and I am looking forward to another hard-fought contest in March.”

Professor Ferdinand von Prondzynski, principal of RGU, adds: “Few sporting events are more closely contested in the north east than the Aberdeen Boat Race. The crews from both universities show incredible skill and dedication in their efforts, and I hope that students, families and the general public will line the banks of the river to enjoy what is undoubtedly Aberdeen’s hardest-fought sporting event.”

“What began as quite a modest event between two local universities has become one of the north east’s most popular sporting events. The rowers should be incredibly proud of their efforts, as every year the race becomes closer and harder-fought. We are delighted to continue our support of the Aberdeen Boat Race again in 2017, and we look forward to supporting the crews alongside the general public on the shores of the River Dee.”