Scottish Licensed Trade Benevolent Society launches Glass Half Full campaign to encourage current and former industry workers in Aberdeen to sign up for support. With thanks to Duncan Fisher, Senior Account Manager, The BIG Partnership. 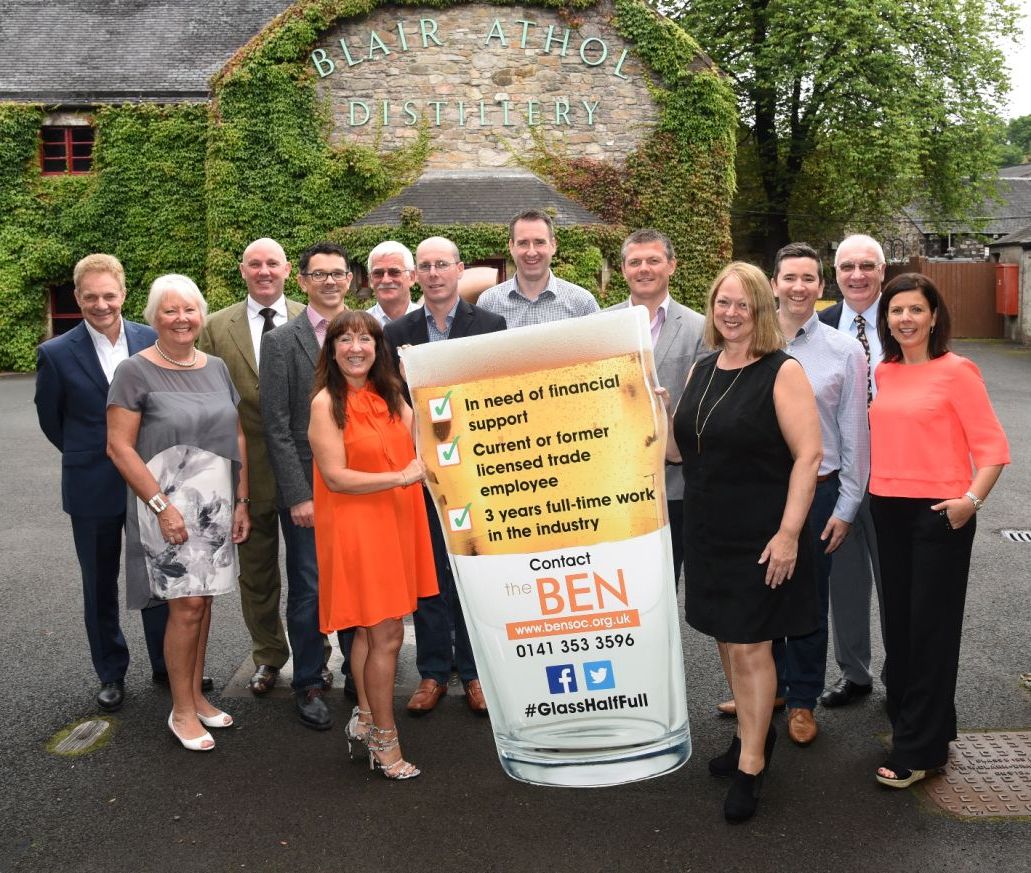 Senior figures from the Scottish Licensed Trade at the launch of The BEN’s Glass Half Full campaign, at Blair Athol Distillery in Pitlochry, which aims to help former and current industry workers across Scotland who have fallen on hard times.

The Scottish Licensed Trade Benevolent Society, known as The BEN, has launched a new campaign to increase the number of people it supports and is calling on potential beneficiaries from Aberdeen to get in touch.

The Glass Half Full campaign, which was launched with the help of leading industry figures at Blair Athol Distillery in Pitlochry, is targeting current and former members of the licensed trade who have fallen on hard times through illness, unemployment or other factors, and would benefit from financial aid.

As well as being backed by the national trade, the campaign is being rolled out regionally with the help of The BEN’s network of volunteers, known as ‘Visitors’, who will take on ambassadorial roles within their respective areas.

Established in 1864, The BEN has been providing social, financial and emotional support to members of the licensed trade for over 150 years. Financially, the charity offers regular discretionary payments as well as one-off grants for emergency situations such as housing repairs or transport costs.

To be eligible for support, applicants must have worked in the licensed trade (incorporating bars, pubs, restaurants, hotels, wholesalers plus packaging, production and distribution firms) for at least three years on a full-time basis. The three years do not need to be concurrent.

Commenting on the campaign, Alex Carnie, The BEN’s Visitor in Aberdeen said:

“The BEN works very hard to get its message out there and the Glass Half Full campaign gives us a platform to let potential beneficiaries know we are actively seeking more people to support.

“A lot of former and current workers of the licensed trade won’t know they’re eligible for support so the campaign is great for raising awareness of how the charity can help and hopefully it will encourage as many people as possible to contact us.”

As part of the Glass Half Full campaign, the charity conducted a survey of current licensed trade workers to gain an understanding of potential challenges faced by those in the industry. The survey found that 27% of respondents knew someone who would benefit from financial aid due to life difficulties.

The feedback also showed 25% of male workers had been unemployed during their time in the industry (up to 32% for males aged 26-40) while 14% of their female colleagues had received external financial support (excluding banks or student loans) at some point in their career (up to 20% for females aged 26-40).

The younger generation of workers was also found to be at risk of facing difficulties, with 21% of respondents aged 16-25 stating they had already been in a situation which required financial assistance from an external body. Although older workers, aged 41 and over, have needed less financial aid (5%) than their younger counterparts, 17% still confirmed that they have been unemployed at some point during their career.

Demonstrating that both current and former members of the industry have been in a challenging financial position, the figures highlight the relevance of The BEN in today’s society and the continuing demand for its services.

As well as encouraging potential beneficiaries to get in touch, the Glass Half Full campaign aims to engage members of the licensed trade, and general public, to help spread the word and Chris Gardner, chief executive of The BEN, hopes it will enable the charity to support more people than ever before.

“Since it was established, The BEN has supported thousands of people across Scotland and we continue to strive to help as many as we can today. As a smaller charity this can sometimes prove challenging, largely due to a lack of awareness, but we hope the ‘Glass Half Full’ campaign will inspire people to either recommend our services or get in touch.

“We know there are hundreds of Scots out there who are eligible for support, but just don’t know it, so the campaign is a way for us to engage with them and let them know we are here to help. However, we understand the apprehension, and embarrassment, which can be caused by seeking financial support but would assure anyone considering contacting us that the application process is completely confidential and any arrangements are managed with the utmost discretion.

“The BEN will continue to support former and current members of the licensed trade for many years to come but we want to build our support network as much as possible. We believe the Glass Half Full campaign will help us expand our reach across Scotland and allow us to widen our impact on the lives of those who need it most.”

Paul Waterson, chief executive of the Scottish Licensed Trade Association (SLTA), and BEN director, is backing the campaign and calling on the industry to show its support:

“The BEN has been the licensed trade’s national trade charity for over 150 years and we are immensely proud of the services it provides. From bar workers to draymen from sales people to restaurant and hotel staff it’s our job to provide assistance when needed. The BEN is well known within the industry, but many people are still unaware of how it helps people and who is eligible for support.

“Therefore we’re asking audiences from both the licensed trade and beyond to help raise awareness of the campaign and encourage anyone that may benefit from support to get in touch.”