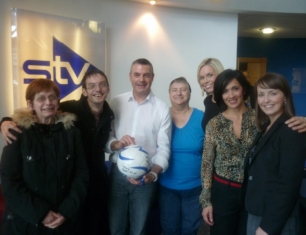 A Charity Race Night will be held in The New Greentrees pub, Dyce on Friday 23rd November to raise funds for Future Choices.  With thanks to Aaron McIntosh

Future Choices celebrates its 5th birthday in 2013, having provided the disabled community with social interaction throughout this time. The services now offered range from arts and crafts to sports games, alternative therapy and singing.

The charity is about to open a new office where it can build on current success and hopefully provide more classes in the near future.

Key to social inclusion is the recent purchase of a minibus enabling members to travel safely and attend organised events and activities, as well as carrying out tasks that able bodied people take for granted.

Several months ago the charity launched an appeal called Cash For Cans which successfully raised the cost of the minibus. Funding the upkeep of the vehicle has been more problematic, however.

“We were struggling financially a while ago then we launched ‘Cash For Cans,’ asking members of the public for their empty used drink cans which we then exchanged for cash.

“That gave us the financial backing to go and buy a bus and then keep the appeal going to fund the maintenance, but due to the decline in metal price, we had to sadly terminate the appeal.

“My job as Chief Fundraiser for the charity is too raise as much money as possible, which is why we’re putting on a Charity Race Night.

“Everyone loves giving, especially at this time of year, and having a flutter and a boogie along with a raffle makes a cold evening joyful as the money raised helps the people who need it most.”

For those who haven’t been to a Charity Race Night, they are exciting events which give members of the public the opportunity to place a small bet on a filmed horse race, with a percentage of the winnings going to the charity in question – in this case, Future Choices.

The event will be held in The New Greentrees pub, Dyce on Friday 23 November from 19.30pm until midnight, with tickets £7 per person. There will also be stovies, a raffle and disco.