Is Mother Nature Beating Trump Back? A Freedom of Information request response indicates the Marram-haired moghul is no match for Mother Nature. The FOI disclosure also shows that while the club and the Shire have a chummy, joking relationship, they are failing to keep the Master Plan updated. Suzanne Kelly reports. 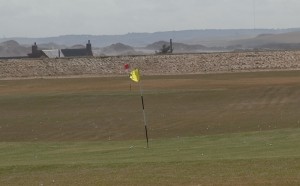 2016 correspondence between Aberdeenshire and Trump International Golf Links Scotland indicates all might not be well at the so-called ‘World’s Greatest Golfcourse’.

The Masterplan is not looking particularly masterful.

Scotland’s shifting sand dune system appears to lack the level of deference Aberdeenshire has shown to Trump so far.

A Freedom of Information Request was lodged to disclose:

“… all correspondence – whether electronic or paper based between Aberdeenshire Council and Trump International Golf Links Scotland, Menie Estate, Balmedie AB23 8YE, and / or any parent company thereof concerning: environmental health issues, use of chemicals, waste management including incineration of waste, drainage, ‘bunds’ such as those near Leyton Farm Cottage on Leyton Farm Road, animal populations, use of private security firms, data protection compliance for the year 2016 to date.

The heavily redacted response (some pages are fully redacted) shows that sand and wind are causing havoc.

*  A 22 February memo refers to a site visit which took place on 19 February. This email memo indicates work was done on the burn and the dunes; an email presumably from the Shire council asks for photographs of the burn prior to works being carried out.

*  on 23 February, someone (presumably a TIGLS employee) wrote back with the requested photographs to say:

“… you will clearly see that the burn is full of sand which has caused the water levels to rise and flood and cause damage to our bridge, etc. You guys personally witnessed the sand/blow movement that was blowing sand into areas of the burn. And that was not even a dry windy day.

“The pictures of the dunes again you will clearly see we did not clear any existing marrum grass of [sic] the dune itself. All these areas were pure sand caused by the storms which resulted in the sand blowing all over the 4th hole and filling up the burn on the far side.

“As you witnessed we are doing our best to replant with Marrum to try and save/stabilize the dune and also protect our championship golf course. Also you will see the tunnel/area where it was cutting through from the sea to the golf course.”

Perhaps attempting to stabilize a sand dune system on the North East coast of Scotland in Winter was not such a good idea. 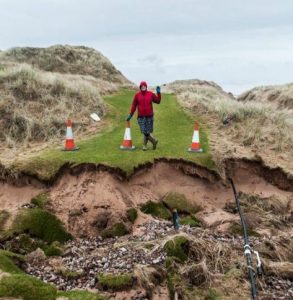 The Shire subsequently acknowledges that the before and after pictures ‘shows the damage’. There is banter between the parties as to how cold it was on the visit, and how being a marram planter is not one of the visitor’s career choice. The conversational tone is perhaps not the same as the Shire’s planners use when dealing with normal members of the public who have had planning breach issues.

When the planning and environmental issues were dealt with by the Scottish Reporters’ Report, when the golf complex was approved, the idea was to have environmental monitoring that would be robust and thorough. This is not happening.

On 10 March, stating the obvious – i.e. that the dunes are not static – the Shire writes:

“Having reviewed the approved Management Plan this does not cover such events [presumably the winter storms; if so this would seem to be a major oversight] in sufficient detail (Major blow out of the dune ridge). These dune systems are very dynamic in nature [you don’t say] and one of the features it is [sic] particularly noted for is the mobility of the dunes. Therefore it is likely that the same event could reoccur in the future.

“The dunes between the Ythan Estuary and Blackdog have been identified by Aberdeenshire Council as a Local Nature Conservation Site – a regionally important site for biodiversity and geomorphology. One of the key features of the golf course at Menie [is] the nature of this stretch of coastline will change in nature but it is important to manage future events to minimise the disturbance to the dune ridge.”

Is the Shire suggesting that the protection of the club needs to be managed? Who will weigh whether such future ‘management’ will have a negative impact on biodiversity and tne nature of the unique dune system? Certainly not Professor Bill Ritchie. Ritchie was quoted in the Reporters’ Report as supporting the Trump scheme.

He was to have kept the environmental watch group ‘MEMAG’ working – but as its minutes show, MEMAG descended into shambles, with Trump personnel skipping meetings. Ritchie never commented on this situation.

The email continues, noting a rather serious failure; the Management Plan is not being reviewed annually:

“I note that the Management Plan states it is to be reviewed annually which has not been the case as far as I am aware. Therefore I would request that this is reviewed in light of the recent storms and steps identified of how to deal with future storms with particular emphasis on the watercourse and coastal dune ridge.

“This would enable future storm damage to be dealt with without the same intervention from outside agencies [what agencies? one wonders] and minimise any long term damage to these dunes.”

Having stood on part of a collapsed course some years back, and reading this now – it looks like a case could be made that the experts got it badly wrong.

“We would consult with SNH, Environmental Planners and SEPA on the proposals. … In addition I would request that the Habitat Management Plan is also reviewed in relation to Otters to avoid further complaints regarding their habitat.”

It could be inferred that the Habitat Management Plan is possibly not updated either, seeing as the Management Plan is not being updated. Sadly, the emphasis is clearly on avoiding complaints regarding otter habitat rather than on protecting the otters, their habitat, and other wildlife.

Perhaps this failure to properly estimate the dynamic dunes, the wildlife and the storms means that an overly-rosy picture was painted by the golf resort’s protagonists? From here, it looks like development of a wild place at all costs prevailed on the day the course was permitted.

However, it now seems Mother Nature has failed to read the memo on Trump’s vision for the ‘world’s greatest course’ and is taking a bit of direct action herself.