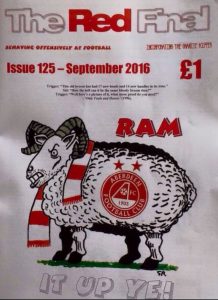 By Fin Hall aka The Man In Red.

Some time ago I wrote about the fanzine, The Red Final. First published in May 1996 on the opening of The Richard Donald Stand at Pittodrie.
Now as the club stands on the verge of moving to to Kingswells, and the new Kingsford Stadium, the fanzine, stands on the precipice of disappearing from existence.

The publication which has been run wholly on a voluntary and non profit basis for the whole of its lifespan has, in all that time, had only two editors. the first being Chris Gavin.

Known by many as Old Beach Ender, or OBE, Chris could always be seen sporting his well worn, brown leather jacket as he stood outside the football stadium, selling the latest issue of the fanzine he started, for only £1.

When he was offered a position as a non-executive director on the board of Aberdeen Football Club, and the fans’ representative therein, he relinquished his editorial position to a younger and very keen contributor, Chris Crighton – aka ‘Merkie’.

The moving of OBE onto the board was a sign that fanzines were valuable voices of the fans, and were to be taken into consideration.

Merkie has taken this acceptance a step closer. He has a column in Aberdeen’s award winning matchday programme, and writes a post match opinion piece in the Press and Journal also.

Some of the contributors have been with the Red Final since it’s early days, and even contributed to it’s predecessor, The Northern Light which is still fondly remembered by those of us of a certain vintage.

Twitter, Facebook, and online Blogs may have given the fans more options on voicing their opinions, but this has not had too much of an direct impact on sales. It still sells around 2,500 copies when it hits the streets, which in itself is reasonable enough readership.

It has also been available for years via subscription and, more recently, online as a download. After all these intervening years it still sells for the same price – £1.

No, the problem comes not with sales nor with articles, although the editor’s inbox is never as full as it used to be, or as he would like; but with actually getting it onto the streets and into the hands of the ever keen public.

As I stated previously, some of the contributors have been with it since the nineties, and are not getting any younger. Ill health as well as age keeps some of them off the street corners, although with this latest issue, number 125, some have come back out to lend a hand.

Not all of the writers live in the city. The Editor himself, who usually has much more than one item in, lives in the central belt. I know, I know, we feel sorry for him, but it’s his choice. One even lives in Germany. So it has been down to just two sellers in recent times.

Despite numerous, pleading requests from Merkie via the aforementioned online vehicles, no fresh blood has volunteered to get down Pittodrie way on match days to help sell it.

When the move to Kingswood comes about, it would seem the logistics of distribution may well be impossible. It’s difficult enough at times as it is.

It may well be that when the remaining copies go on sale at the St Johnstone cup game next week, and the first ever game against The Rangers on the 25th, (if there are any left) it will be for the last time ever.

The final decision has yet to be ascertained. It is Scotland’s longest running fanzine, and, as far as I am aware, the only one in the country still going – but not for long. I personally will mourn it’s loss, being one of the older writers on it.