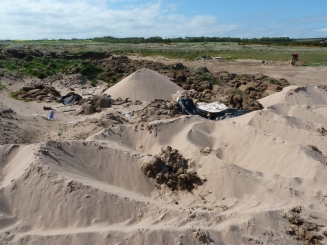 He has torn the heart out of a rare, dynamic dune system so important that part of it had the designation ‘Site of Special Scientific Interest’, the rest designated a SINS – a Site of Interest to Natural Science.

What was once a wild and untamed area is now constricted by the tarmac roads, the vast turfed and seeded greens and fairways, fertilised to a bright vivid green in comparison with the gentle soft green of the original marram grass.

Perhaps it is a good golf course, but it is definitely in the wrong place.  Nature is fighting back – strong winter winds from the beach blow sand over the whole area as they have for centuries.  Trump will find he has a real fight on his hands!

What you won’t hear from Trump is the lengths he has gone to make life difficult for some of the residents.

From the start he tried to purchase some of the homes using subterfuge – first by sending a minion with a false name to say how much he would love to live in their home and offering a paltry sum, then he himself came clean, pretended to be a friend and made insulting offers.  Things turned sinister when he tried to persuade Aberdeenshire Council to obtain these homes for him by compulsory purchase.

Eventually all his attempts failed, but then he turned nasty.

Sand and earth bunds were built in front of homes so that they couldn’t be seen from his precious golf course. Trees were planted to further screen their properties.  Security vehicles were set to watch homes at all times of the day and night. The residents and their friends and family were stopped and questioned by Trump security – and worse.

As a neighbour Trump should be handed an ASBO. He submits planning applications, gets planning consent, then builds just whatever he wants.

the owners now look onto the back of a weed-laden sand and earth bank, imprisoned by Trump’s arrogance

The car park, for example, bears absolutely no resemblance to the planning consent he was given by the council.  He has submitted at least six retrospective planning applications for work he has carried out but has no consent for, and there are further examples of development carried out without planning consent even being sought.

If you want to see examples of this, go behind the big wooden gate at the end of the clubhouse car park. Squeeze round the gate (as residents with long-standing access rights now have to do) and see how Leyton Cottage has just been blanked off.

From having glorious long views across the dunes and farmland as far as the eye can see for decades, the owners now look onto the back of a weed-laden sand and earth bank, imprisoned by Trump’s arrogance.

Sand blows off the bund into their house, water is channeled by the bank down their track to settle around their low-lying property, and lights shine into their property from the car park lights built far too close to their home. Trump staff strim the grass on the golf course side of the bund close to Leyton Cottage, but they do this on Sundays causing a noise nuisance.

The bund was never on any planning application but he went ahead and built it and now the council has caved in and will allow it to stay. Just think for a moment how you would like it if this had happened to you.

Trump once stated that he was a great environmentalist. How would he explain the rubbish heaps he has lying hidden about the estate? 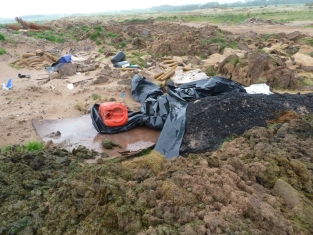 Piles of rubbish are burnt regularly, and heaps of grass cuttings have plastic chemical containers buried in them. Attempts have been made to cover the evidence with sand.

Fertilisers appear to have been spread around water courses causing wild plants and weeds to spring up and thrive further downstream.

The water then carries on out to sea possibly having an effect plants and animals in the marine environment.

The local newspapers – the Press and Journal and the Evening Express – won’t say a word against Trump and his development. Could the fact that the P&J editor is married to Trump’s office manager here at Menie have some bearing on this?

Nevertheless, many folk locally have the measure of Trump and know about the way he deals with things. Yet, so many are still blinded by his ‘celebrity’ and accept just what he says as gospel truth.

5 Responses to “The Trump Has Landed”