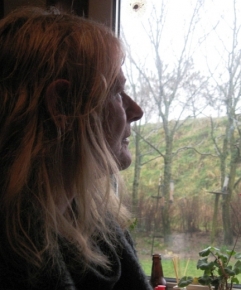 An eight-month old application for retrospective permission at Trump Golf Links International at Menie has suddenly been altered with no warning or publicity.

A new document was added earlier this week to the retrospective App 2012/2342, and after eight months of relative inaction, the application which would allow the bunds to stay put is now going to be decided by the relevant councillors:  on Tuesday 26 March.

The very short lead time – less than a week – between the changes to the application made on the Council’s web page means little chance for meaningful consideration – and the people who made representations have not heard anything about the changes or the upcoming meeting.

These developments may well be against protocol.

How this happened, who was involved, and the legalities of the situation are being questioned by residents and campaigners.  Arguably, the application if changed should be re-submitted, allowing people the chance to respond to the new document, and those who made a representation should have been  informed of the changes and the meeting.

These bunds – which seem to serve no purpose but to make life difficult for those living close to them – should just be taken down as originally promised.

They block light, they block views, and crucially the wind has blown earth off of them into the Munro home, at times leaving an inch of sand and dirt inside the front door, and damaged her cars, with sand and dirt getting into the machinery.  The bunds have arguably devalued the Munro property.

Aberdeenshire Council’s Planning Department, already one of the targets for a requested independent inquiry (15,000+ people have signed a petition so far), had previously given assurances that the bunds (steep, high mounds of earth) built around residents’ homes were temporary.  This assurance was repeated in an email from now-retired Aberdeenshire officer, Gordon Lyon in May 2012.

So far, the Trump Golf Links International Scotland operators have deviated from approved planning permission with the bunds, parking lot, and other issues:  all of these deviations received retrospective planning permission.
See: Menie Estate Report by Suzanne Kelly 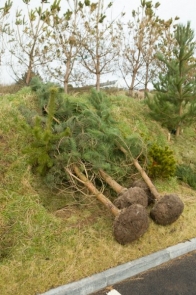 Why the developer is going against the approved plans without any challenge by Aberdeenshire Planning officials, is unclear.

Planning were supposed to visit the site frequently to prevent issues such as deviations arising.

The Government Report on the development recommended the developer would be expected to stay to the approved plan, and that monitoring would take place for planning and environment compliance.

This hardly seems to be the case with the bunds, parking and other deviations, and MEMAG, the environmental monitoring group is not meeting (last posted meeting minutes are for June 2012) and not answering correspondence (no questions answered from a 26 January email to date).

A resident, who discovered the changes on Aberdeenshire’s planning website this week, made the following observations:-

“As well as an amended drawing of the small bund (and change of title so that it no longer mentions Leyton Cottage), there is now a completely new drawing called ‘LANDSCAPE PROPOSALS – AS BUILT EARTH   BUND ADJACENT TO DRIVING RANGE’ which details the ‘big bund’ immediately south of Leyton Cottage and adjacent to the Access Road.

“As far as I know there has been no public notification of this expansion of scope. And there appears to have been no notification to the people who had previously submitted objections to the original content of this application (the author of these comments received no notification himself).

“The ‘Expiry Date for Public Comment’ is still shown as 16/08/2012- and ‘The time period for submitting comment has expired’.

“When the bunds first appeared back in October 2010, the Council’s enforcement officer at the time, Gerry Main, wrote: ‘The mound of sand to the south of Leyton Cottage is of a temporary nature and will be utilised.’

“Furthermore, the APP-2012-2342 web page now shows a ‘Committee Date’ of 26/03/2013 (next Tuesday) when the application will come before the Formartine Area Committee. ( See: http://www.aberdeenshire.gov.uk/committees )

“As is normal practice, the planners have prepared a report to the Area Committee. It was posted there sometime in the past 24 hours (it wasn’t there yesterday morning). The report recommends that permission is granted, subject to removal of the trees planted on top of the small bund.

“Strangely, the report states in para 6.7 that ‘With reference to comments made through representation that have not been taken into account in the above assessment, this application is solely for the car park area and not for the landscaping for the access way’. This needs clarifying as it is inconsistent with the fact that the ‘big bund’ drawing has been published on the planning page, which the report appears to overlook completely.

“Also the ‘Additional Document 1’ presented to the committee is drawing no 71236/8007 Issue D and includes contour detail of the lower section of the ‘big bund’, whereas the version of this same drawing on the planning page (as of last night) was only at Issue B and had no detail of the big bund.

The writer of these comments feels  that:-

“this looks suspiciously like TIGLS and the planners attempting to sneak through retrospective planning consent for the highly controversial and unauthorised ‘big bund’ hoping that no-one will notice, and without allowing public comment”

The following questions have been asked of Anne Ramsay of Planning:-

1.  Have new documents been added to this application as it appears?  IF SO:

2.  Who agreed to add these documents?

3.  How has this information been conveyed to interested parties and those who sent in representations?

4.  Who made the decision not to throw this amended application out and start with a new application reflecting the changes?

5.  Is Aberdeenshire Planning confident it is proceeding in a legally-acceptable, transparent manner in this instance?

6.  Why, after an 8 month wait, is a newly amended application to be determined with under a week for council members and stakeholders to digest?

7.  In due course, please send a response to the resident’s concerns listed above.

If the answer to Question 1 is negative, then:-

a.  Please explain the appearance of new documents on the application?

b.  Have stakeholders/those making representations been advised the matter will be discussed this Tuesday?

The response received will be printed as soon as can be arranged.