Things are seriously amiss at the Trump International Golf Course and Menie Estate, as Aberdeen Voice’s Suzanne Kelly and photographer Rob discovered. Inspired by Anthony Baxter and Richard Phinney’s You’ve Been Trumped film, Kelly has followed developments at ‘the world’s greatest golf course’ with interest. On a recent visit, residents showed our team around the site and shared stories. In the second instalment of a series of articles, Kelly looks at the demise of the road infrastructure. 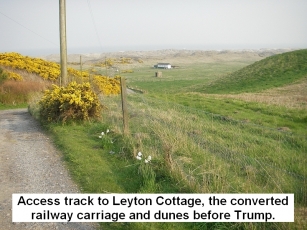 There are signs of flooding all over the Balmedie area. Damage to the course is dramatically illustrated in the article:

But the course damage is only one aspect of how the estate is faring this winter; the residents have more practical and urgent problems.

Susan Munro has lived on the estate for decades. Alongside her house runs a road which had until recently been a smooth path.

It slopes gently down to Susan’s house on the north side, and now the golf course on the south.

“I’ve lived here for 30 years and this is the worst it’s been,” Susan says.

She is shaking her head, standing in the doorway of her home. At her feet are signs of flooding; a wet, sandy, muddy substance covers concrete slabs and seems sure to cause her drains to overflow. She is, however, mainly talking about the only access road to her home. 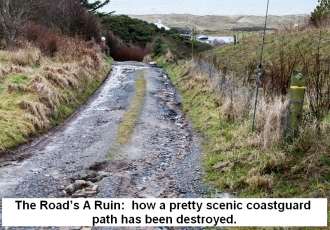 The road is virtually unusable.

When Trump came it was with ambitious plans and an assortment of construction vehicles. The access road had quite a lot to cope with. While it may sit on Trump-owned land, historically it served the residents as an access road.

It has, in the writer’s opinion (and that of several residents), been damaged badly as a result of construction vehicles and the run-off pipe or pipes.

There is no drainage for this road. Already badly rutted from course construction traffic, it is being further eroded. 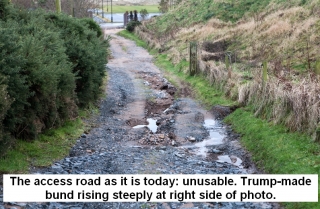 Not helping the matter is the construction of giant bunds – tall, steeply rising mounds of earth built along the length of this road and on the east side of the property border between Trump and Munro. (More on these bunds in a future article; they deserve a great deal of description).
Water runs down this now badly rutted dirt road, and as the road ends in the newly-constructed parking lot, a short gradient channels yet more water off the new parking lot tarmac onto the dirt road.

Finally, the Trump organisation has dug two gravel pits in a field between the Munro house and David Milne’s home; the field slopes down towards the road. 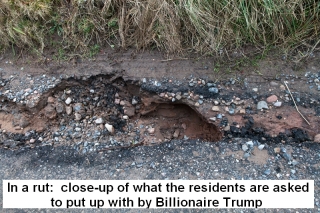 The idea seems to be that the first pit, filled with gravel and then covered would catch water, with the overflow going to the second pit.
The only place from there for water to go would certainly seem to be the damaged little access road.

It is unclear that any of these additions – run-off pipes, bunds, drainage pits, and slope from parking to the dirt road – had been given specific, clear planning permission.

In fact, I was promised the bunds were temporary when I wrote to Aberdeenshire Council in 2011. Temporary is a long time in this part of the world, it seems. 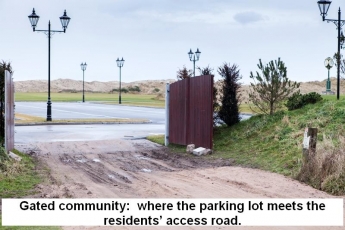 It would also seem no one from Aberdeenshire Council is making regular visits. It would seem obvious the council should ensure residents can access their historic road.

Considering that most of us living in the North East would have to apply for permission before changing the type of windows we have in our homes, why are such damaging, major modifications to the landscape being allowed with virtually no sign of proper approval process or assessments?

There is no suggestion on any part that these modifications are done to deliberately make life difficult for the residents. The fact remains though: this is just what they are doing. 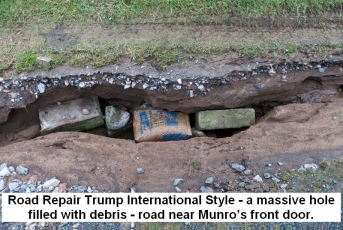 The road is now so bad that Susan Munro cannot use it any longer.
In fact, if you had a 4×4 you would still face difficulties trying to drive down this road, not least because of the seriously dangerous gap which has opened up near its lower end.

This has had a few token objects such as a bag of building material (unopened) unceremoniously dumped into it, as if that were a remotely adequate or safe remedy to this dangerous situation.

Walkers would find nothing to warn them of the dangers of walking this road, either.

Fixing the road should not be too difficult; it should, in my opinion, be done quickly, by the council, and paid for almost exclusively by the Trump Organisation.

Trump is quick to condemn area residents who keep their property in a state he doesn’t like, yet this road is now a massive eyesore and can’t be used. 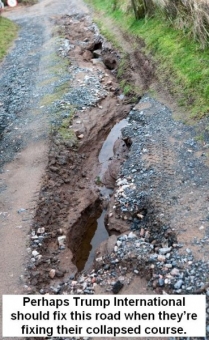 Perhaps if it were visible to his golfers it would be a different story, but that ‘temporary’ bund shields players’ eyes from this unpleasant reality.

At the end of this series of articles, a summary report of findings will be sent to relevant organisations including Trump International, Aberdeenshire Council Clerk of Works, councillors, and not least – the Health & Safety Executive.

In the meantime, Susan has to use the Trump parking lot and new road (with a perfectly smooth tarmac surface) to get off the estate.

How has that been working out for her?

How is she coping with the bunds? What are things like for her?

The answer is probably worse than you might imagine.

Residents’ experiences will be covered in the next article in this series on Friday morning.

Estate residents have just been advised Leyton Farm Road will be closed 17 and 18 January.  They believe this is for road repair work.  Aberdeen Voice will report on the repair work once completed.