With a wet but generally mild period behind us, could we hope for a snow-free winter? Not a chance, reports Duncan Harley. This is N.E. Scotland! 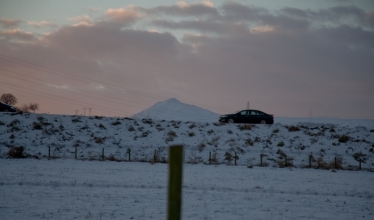 We Scots are always bleetering on about how unprepared other folk in the UK are for winter weather.

Newspapers and pubs are full of comments about how English cities grind to a halt after a couple of centimetres of the white stuff plunges from the sky.

It reminds me of the leaves on the line headlines of a few years ago following train delays in autumn, except that leaves really do cause locomotives to slip about and lose traction, hence the sand boxes they are now equipped with.

Well, I personally think that we Scots should take it all back. Last night it snowed in Aberdeenshire and, no doubt, elsewhere as well.

Just a bit of wet snow, if truth be told and, as far as snow in this part of the world gets, just a light covering. It was well forecast and the gritters were seemingly out in force.

Three-hour tailbacks on the roads into and out of Aberdeen is what happened. Cars on their roofs, in ditches and in fields. Folk unable to get to work, schools closed and transport links in chaos.

On behalf of the Scottish people, I would like to apologise to the rest of the UK for the disparaging comments last year, the year before and the year before that, as well.