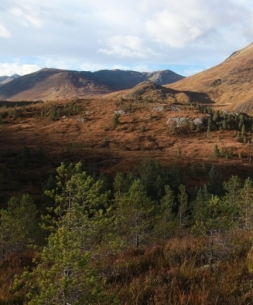 Conservation charity Trees for Life has welcomed the first United Nations International Day of Forests with a call for more people to get involved in helping to create a renaissance for Scotland’s beleaguered forests.

The UN General Assembly has proclaimed 21 March to be the International Day of Forests – a day to celebrate and raise awareness of the importance of forests and trees for all life on earth.

Across Scotland, forest restoration efforts are bringing new or renewed life to many ancient native woodlands, from Rassal Ashwood in Wester Ross to the Carrifran Wildwood in Dumfries and Galloway, and from the Loch Sunart Oakwoods in Lochaber to Abernethy and Glenfeshie in the Cairngorms National Park.

Yet with increasing concerns about climate change, deforestation and biodiversity loss – as well as tree diseases such as ash dieback and Dothistroma Needle Blight, which is a potential threat to the iconic Scots pine – the need for concerted action to conserve and regenerate Scotland’s native woodlands is more important than ever before.

“There are signs of hope for woodlands throughout Scotland, but we urgently need more people to help make a difference now – the future of Scotland’s forests is literally in our hands. We are the last generation with the opportunity to save the CaledonianForest, for example, as many of the remnants of this Scottish equivalent of the rainforests are in terminal decline.

“Fortunately projects such as ours provide an inspiring and practical way for people from all walks of life to help make a personal and positive difference – to help restore natural wonders such as the CaledonianForest and to reverse the global trend of deforestation.”

For 2013, the Year of Natural Scotland, Trees for Life is:

Following a long history of deforestation, some 150 years ago the Caledonian Forest reached a critical point of no return. Since then, with too few remaining trees and too many deer eating all the seedlings that germinate, young trees have struggled to get established. This has left ‘geriatric’ forests made up of old trees at the end of their lives, with no new ones growing to replace them.

Today, only a fraction of the former Caledonian Forest survives, with its native pinewoods reduced to 35 isolated remnants. However, Trees for Life is restoring the forest to a wilderness region of 1,000 square miles in the Highlands to the west of Loch Ness and Inverness.

Volunteers from the award-winning charity have helped to plant more than one million trees at dozens of locations, and to create 10,000 acres of new forest. Amongst these emerging forests, a complex web of life is renewing itself. Habitat restoration is making a big difference to the wildlife of the Caledonian Forest, which includes the strawberry spider, wood ants, red squirrels, rare sawflies, ospreys and capercaillies.

3 Responses to “International Day Of Forests”