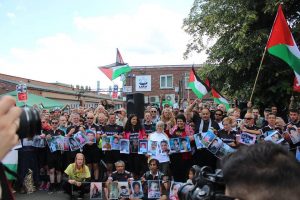 The Big Ride has set out to draw attention to the 547 children verified as killed during the Israeli bombardment of Gaza in 2014.

With thanks to Greg Challis, The Big Ride.

Hundreds of cyclists and their supporters who blockaded a Midlands factory in protest at its sale of drones used by the Israeli military have vowed: “We’ll be back.”
The Big Ride for Palestine staged four feeder rides from London, Bristol, Manchester and Sheffield which converged on Birmingham for a festival in Sparkhill Park.

The peloton then moved off en masse to a rally at the factory gates of UAV engines, in Shenstone near Lichfield.

UAV is part of the Elbit group and has been the target of repeated protests by activists, appalled at the way drones have been used against Palestinian civilians.

The Big Ride has set out to draw attention to the 547 children verified as killed during the Israeli bombardment of Gaza in 2014.

Protesters pinned photographs of child victims on the fence surrounding the factory and, during a two hour peaceful action,heard first hand testimony from a Palestinian doctor working with children in Gaza.

The event also created a minor internet sensation with ten of thousands of views of a video posted by the Friends of Al Aqsa group and You Tube footage of Tom from Manchester performing his rap composition, There’s Nothing new about the News.

Dr Mona El Farra, who lost nine members of her extended family in 2014, told the crowd:

“With your support and solidarity, we are helping some of the thousands of children who are traumatised by the loss of the families, their homes, their schools. Even though Gaza has been reduced to rubble in places with the support of arms manufacturers like Elbit, who own UAV, we are doing everything we can to rebuild lives.

“The children are all our futures, and they are so brave, but I can’t tell you how damaged they are. They have to learn how to play again, to be children. This is nothing more than collective punishment of the Palestinian people by the Israel and we say that it is a war crime.”

The Big Ride drew support from MPs, MEPs, trade unions and celebrities, including film director Ken Loach and campaign and charity groups including War on Want and Campaign Against the Arms Trade. They have set a target of £20,770 to help the Middle Eastern Children’s Alliance, which funds projects on the ground in Gaza.

Activists are now meeting with other grass roots groups to step up their campaign against UAV and the Government supported arms trade with Israel.