Aberdeen could only grind out a draw against a defensively resolute Hearts side, says Voice reporter Andrew Watson. 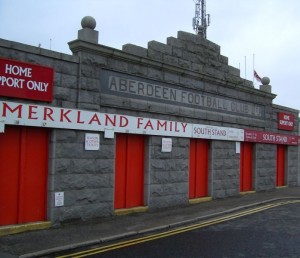 In terms of the pitch, the day started brightly, a bit of rain ensuring the pitch not to be too dry. ‘Waterfront’, by Simple Minds, with “come in, come out of the rain”, playing over the tannoy very apt, indeed.

Hearts’ support was very vocal, nestled in the away end of the South Stand. There appeared to be strains of “You’re Not Famous Anymore” emanating from that very section.

When the match proper began, Peter Pawlett connected with Jayden Stockley, the latter almost heading the ball into the net.

Then there was a long distant effort from Aberdeen. Right idea, but the ball went wide.

Pawlett forced a corner, with the ball eventually going out for a goal kick.

A subsequent scramble in the Hearts box could’ve been a goal for Aberdeen.

Niall McGinn had his shot deflected by the keeper, Jack Hamilton, for a corner. Hearts fared with an attempt of their own, too.

Wes Burns created a free kick, which was taken by McGinn.

The first real flashpoint saw the ball almost over the line, saved expertly by Hamilton via an acrobatic punch out of the danger area.

Down the other end, the ball bobbled favourably for Aberdeen as Hearts struck out on goal.

The first booking of the game came as Aberdeen won a free kick.

Hearts then had more close attempts on goal, with Aberdeen very fortunate to survive them.

The Jambos even seemed to be awarded a soft foul not too far from the outside of the Aberdeen box. A glancing header went wide.

One of their charges, Faycal Rherras, however, got booked for petulance, having booted the ball away in anger in response to a free kick decision.

Pawlett was awarded another free kick at Hearts’ expense, too.

Then followed yet another Hearts’ booking, some of their play seeming very cynical.

Shaleum Logan got forward, his ball, whether shot or cross, ending up in Hamilton’s arms.

McGinn’s free kick, later on in the game, went over the bar.

Anthony O’Connor kicked off the second half with a superb sliding block to deny the Jam Tarts.

Aberdeen, in turn, weighed in with a powerful but inaccurate shot.

O’Connor, again, fared with a timely tackle of the sliding variety.

There were yellow cards aplenty as Aberdeen won another free kick.

Logan seemed to help steer the ball, as best as he could, into the net. Pity the recipient put it wide.

McGinn raced down the wing, putting the ball over the bar.

Hearts came close, with O’Connor perhaps changing the trajectory of the ball favourably for Aberdeen.

Aberdeen advanced, but were swatted away, Hearts faring with a superb defensive diving header.

O’Connor appeared to be hurting after another excellent commitment to the Aberdeen defensive cause.

After this, Hamilton leapt to catch the ball and defuse Aberdeen.

The latter were lucky not to be a goal down, after inviting Hearts to score after allowing too much time on the ball.

Graeme Shinnie was commanding, soaking up tackles and, at the same time, ploughing forward.

Then a header glanced wide for Aberdeen.

A final Aberdeen substitution was made, Miles Storey coming on for Pawlett.

Having not put a foot wrong up until now, O’Connor appeared to flap for the first time. Thankfully this was rectified by an alert Logan, sweeping the ball away from danger.

Arguably Hearts standout player, keeper Hamilton, for the umpteenth time, rose to the occasion, catching yet another Aberdeen delivery. He did so, again, even holding on after being knocked off his feet, courtesy of an aggressive Aberdeen attack.

Hearts then came with a fortuitous free kick, in a very advantageous position. It was struck with some power, but hitting off the defensive wall.

The Hearts’ defence, in turn, really put their heads on the chopping block with their never say die, suicidal defensive diving headers to prompt the ball out of danger.

Aberdeen had a penalty claim ignored.

Hearts put what appeared an inevitable goal over the bar from, really, no distance at all.

An additional two minutes of play was announced.

Before the Red Army faithful knew it, their side had been frustrated to a second subsequent goalless draw. Very disappointing, indeed.