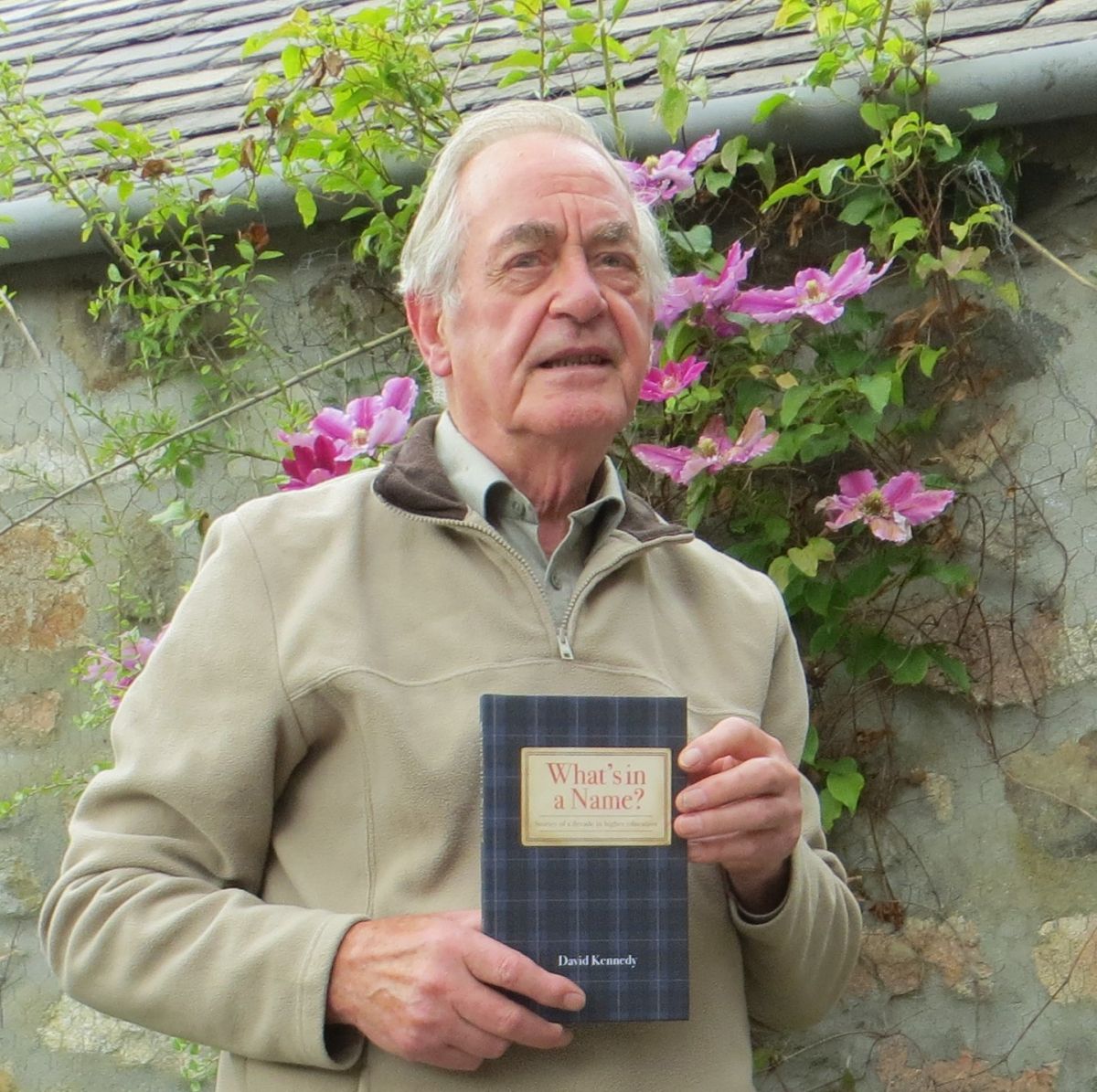 Dr David Kennedy – academic, educational reformer and educational observer. He is possibly best known as the former head of Robert Gordon University who handed his degree back in disgust and protest at the honorary degree handed to Donald Trump.

Honouring Trump seems more of a huge error in judgment, academically as well as moral, as each day passes.

Trump goes from disaster to disaster, having been linked to organised crime by the BBC’s Panorama, and having branded himself as a racist, nationalist, sexist self-publicist. Yet RGU stands by its decision. And Dr Kennedy stands proudly by his.

Dr Kennedy released a book in June on his experiences in Scottish education. What’s in a Name?

Stories of a decade in higher education is available from Amazon as hardback, softback, or electronic versions. It can be found here.

Kennedy gave me his book to read and gave me an interview in mid-August. Circumstances at my end have delayed my reading his excellent book and putting the finishing touches on our interview. I regret this for several reasons, not least being Dr Kennedy’s ongoing kindness towards me and his patience in explaining some of the more complex issues involved in the history of changes in Scottish education.

More importantly though, the changes in our education are having tremendous changes on our society, our values and our morals. Some say that we are hot-housing our children from far too early an age, separating infants and young children from their parents who need to earn money.

Are our children able to find education that suits their intellectual potential despite whether they come from rich or poor backgrounds? Are we stressing our children by too much school and too much homework? Are some subjects (phonetics, ‘new’ mathematics) unhelpful hoops we make children accept without question? Are we teaching children how to think and synthesise facts they discover themselves and how to structure logical arguments – or are we teaching them to memorise things temporarily to get good exam results?

And this is before we reach higher education.

When I wanted a higher education, I was interested in the liberal and fine arts; I wanted knowledge first, and any future earnings potential was a secondary consideration (if I ever considered money more important than knowledge). Now our higher educational system seems far more concerned with employment outcomes than learning outcomes.

Engineering degrees involve great specialisations. I know several financially successful engineers over the years who seem to have limited cultural, historic, artistic, ethical knowledge. Is it possible that an educational system which favours specialism and ignores history, classics, ethics, philosophy and arts contributing to a shallow, materialistic culture that is willing to sell the planet’s environmental future for profits today?

Perhaps we should ask Dr. Donald Trump. I know what I think, and look forward to discussing the issues with Dr. Kennedy.

We start our telephone conversation; I am reminded of our earlier interview when we discussed Trump and RGU. This time however, David has a huge amount of information he is eager to convey, and I don’t need to ask him any questions at all.

“The book expands over my experience of higher education in Britain; things I personally knew about.

I think its relevance to the current situation in Higher Education (HE) lies in 5 issues:

The book was inspired originally by the fact RGU, originally RGIT, is very well known and certainly in Scottish education, everyone thought of it as being highly prestigious; with an enviable profile. It was regarded as the flagship of Scottish post-school education. At that time, Scottish universities considered themselves to be British rather than Scottish and argued strongly against coming under Scotish control.

I should say that there were different mechanisms of funding for tertiary education. One was through local authorities. Another was through a grants committee funded by Whitehall, but very much at arm’s length, run by a committee of academics. The third was direct funding by government and this was the case here in Scotland – education colleges and central institutions by the Scottish Office. This was unique to Scotland and highly relevant to what happened later on.

I was appointed principal of RGIT in November 1984 and took up post in May 1985. From the start, I knew things were not right. There was a lot internally that was wrong, but I never ever expected the mess to be quite as bad as I found it.

The early chapters of the book, which is semi-autobiographical, is a collection of short stories, all true, as experienced by me. They are clustered in ten chapters. The first is about the stresses of the job – it describes some of the outstanding problems I found on taking up the post.

Very early on, I discovered to my horror that if you are a boss, then other people perceive you as being something different, even if you think you are just like everyone else. Relationships are different, some deferential, some obsequious, some hostile, and others downright insulting.

One anecdote in Chapter 2 concerns the first day I arrived. There were great piles of papers that had accumulated over many weeks; some very urgent. The less urgent included a petition from staff about the food in the refectories. I decided to visit each in turn (there were 6 in all). On the second day, I went to a nearby refectory for lunch; there were a pair of staff sitting together in earnest conversation and a guy sitting on his own.

I sat with him and began to chat. He had little apparent interest in anything and I found it difficult to get him to talk. However, some of his colleagues joined us and an animated conversation took place.

A young woman sitting next to me asked where I was from. [I’m a Geordie; it’s a very recognisable accent]. I told her, ‘I’m from Tyneside. I thought you’d know by my accent.’ ‘No, where are you from in the institute?’ I said ‘The Principal’s Office’ . She thought she’d perhaps hear a bit of gossip and asked what I did there. ‘Well, I’m the Principal’. All eight of them upped and ran; it was like an explosion.

They perceived me as some terrifying being quite different from themselves; this was reinforced later, many times.

Chapter Two tells about students, colleagues, stratagems that were used to gain special advantage, or to do the Principal down!

Chapter Three is about oil-troubled waters. Far from pouring oil on troubled waters, this was about the oil industry and the problems it brought. I can’t really describe it all – you’d have to read the book. RGIT had a massive input into the oil industry; more than any other institute in the UK. It had a world-wide reputation for the work it did. Meanwhile, at the Scottish Office… well, there was massive and secretive manoeuvring going on.

I start the chapter by saying 1066 was probably the most dramatic year in history of Britain, while 1988 probably most significant for Aberdeen, with Piper Alpha, and for RGIT. It was a very dramatic year also for higher education because of political goings-on that we were told nothing about at the time. We found out later, to our cost.

Chapter 4 – Quis custodiet … (ipsos custodes)? – who guards the guardians?– is about the way public sector institutions are governed, and how control is exercised. The press often terms itself as the ‘fourth estate’ that casts light on those in charge, and particularly on wrongdoings; but does it do this both honestly and fairly? It provides facts about people who are given responsibility to run organisations on behalf of the taxpayer.

The chapter also describes some unfortunate consequences of media behaviour.

There was always a shortage of accommodation and Aberdeen Journals would have stories about the hardships of students unable to find suitable accommodation.

There was an implied criticism of the institutions and their bosses, taking in too many students – for the money! In one year two Art students decided to sleep in tents on the banks of the Dee. They contacted the press about their ‘plight’. The press had a field day. It turned out these were rich kids, carrying out a prank. The media didn’t investigate, simply looked for good stories – and were strangely silent when the truth became known.

Chapter 5 – Night-flying. The English call it ‘flitting’; it implies something done in the dark. This chapter relates stories about people who’ve tried things on.  It’s about the misbehaviour of staff who were too entrepreneurial.

Chapter 6 – A Question of Quality. This recounts the operations of the Council for National Academic Awards, which awarded the degrees offered by the polytechnics in England and central institutions in Scotland. It was the biggest degree-awarding body of its day and set standards for courses and their delivery, for examination regulations and procedures, as well as for the awards themselves.

Everything was written out, purposes and processes made clear, with evidence and fact-driven judgements based on clear standards.

I tried to explain its strengths and weaknesses. I played an active role in CNAA and assisted in more than 70 institutions of all kinds in Britain. CNAA was closed down by government in an act of educational vandalism. It was the biggest mistake by British government in higher education in the last 50 years.”

The interview will be continued shortly, with a review of the book ‘What’s In A Name?’

One Response to “Dr David Kennedy – A Further Conversation Part I”