On Wednesday 14th December, Aberdeen College Students Association staged a protest outside the Loch Street entrance of Aberdeen College’s Gallowgate centre  as a fight back against education cuts.  As it stands there will be a reduction of 20% in college budgets in Scotland over the next three years.  Patrick Neville reports. 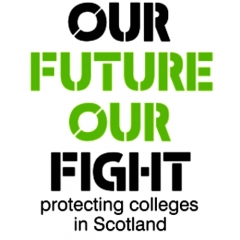 The damage caused by these reductions will result in catastrophic cut backs that will directly affect colleges. These cuts have a high probability of affecting student financial support, staff jobs and classroom resources and for some colleges may cause course closures and forced mergers. If it is financial support that is affected then students from poorer backgrounds will face another barrier to progress through education and will be segregated from the rest of the students.

College education must be a priority in the budget. Colleges in Scotland serve as a medium for people of all ages and backgrounds to access further education.

With less access to college education, hopes for people to successfully be able to find future employment or develop the skills necessary for their lives are at serious risk.

“The level of cuts the Government are suggesting that colleges should endure is absolutely outrageous. The damage caused by these reductions could result in catastrophic cut backs resulting in a cut to student support, staff jobs and classroom resources. For some colleges these cuts could result in course closures and forced mergers. If there were efficiency savings to be made at Aberdeen College they have been made, if there was fat to be trimmed it’s been done.

“If financial support is affected, the poorest students will be the worst hit and risk becoming alienated from education. When there is less access to college education for our community, the hopes for people to find employment or develop the skills necessary to improve their lives are put at serious risk. This further cutback will have a damaging impact on students in the North East and the Scottish Government need to take their head out of the sand and do something about it.

“We are calling on all North East MSPs to protect our colleges and the future of thousands of students. Colleges in Scotland serve as a medium for people of all ages to access education that helps enable them to work. MSPs must make protecting college education a priority in the budget.”

The National Union of Students (NUS) Scotland has begun spearheading a campaign on the matter titled “Our Future Our Fight” which is open to the Scottish public to participate in. A petition has been set up at http://www.ourfutureourfight.org/ which enables Scottish residents to sign their name in support of protecting college education. By signing the petition, a letter will be sent out on the senders behalf to their regional MP’s and MSP’s with additional room to add your own comments on the matter.

Please note that if you sign the petition, you should expect to receive an email back from your representatives.